How can companies and investors avoid losing money as the global economy goes into a China-led recession?  That’s the key question as we enter 2019.  We have reached a fork in the road: 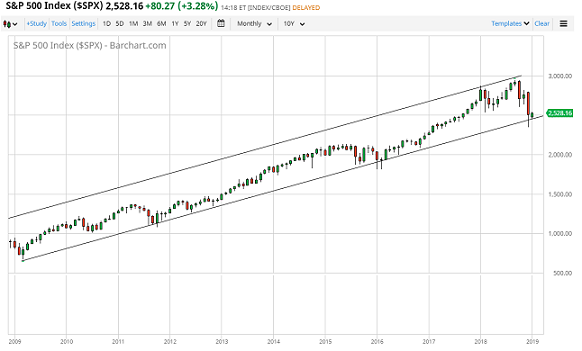 The central banks’ aim was set out in November 2010 by US Federal Reserve Chairman, Ben Bernanke:

And the current Chairman, Jay Powell, rushed to calm investors on Friday by confirming this policy:

“We will be prepared to adjust policy quickly and flexibly and use all of our tools to support the economy should that be appropriate.”

His words confirm he equates “the economy” with the stock market, as the chart shows:

Like Wile E Coyote in the Road Runner cartoons, the Fed has used more and more absurdly complex strategies to try and keep the market going upwards.  But now it is very close to finding itself over the cliff edge.

CORPORATE DEBT IS THE KEY RISK FOR 2019 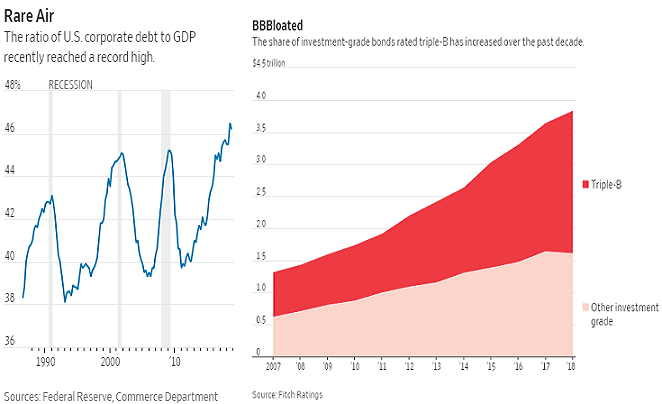 The Fed should have realised long ago that markets cannot keep climbing forever.  Instead, by printing $4tn of free cash, it has temporarily destroyed their key role of price discovery.  As a result:

We are heading almost inevitably to another  ‘Minsky Moment’ as I described in September 2008,:

“Earnings from the new investments prove too low to pay the interest due on the debt. Confidence in the ‘new paradigm’ disappears and, with it, market liquidity. Investors find themselves unable to sell the under-performing asset, and suddenly realise they have over-paid. In turn, this prompts a rush for the exits. Prices then begin to drop quite sharply, as ‘distress sales’ take place.”

This time, however, the risk is in corporate debt, not US subprime lending.  As the charts above show:

Investors’ obviously loved Powell’s confirmation on Friday that he is determined to cover their backs. But they may start to remember over the weekend that the cause of Thursday’s collapse was Apple’s problems in China – about which, the Fed can actually do very little.

And whilst Apple won’t go bankrupt any time soon, weaker companies in its supply chain certainly face this risk – as do other companies dependent on sales in China.  And as their sales volumes and profits start to fall, investors similarly risk finding that large numbers of companies with “Triple B” ratings have suddenly been re-rated as “Junk”:

CHINA’S CORPORATE DEBT IS THE EPICENTRE OF THE RISK 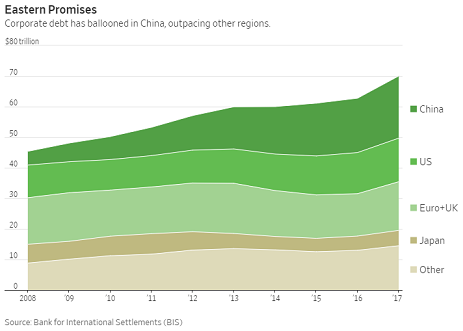 As the chart shows, China’s corporate debt is now the highest in the world.  Yet it hardly existed before 2008, when China’s leadership panicked and began the largest stimulus programme in history.

The “good news” is that China’s new leadership recognise the problem, as I discussed in November 2017,  China’s central bank governor warns of ‘Minsky Moment’ risk.  The “bad news” – for the Fed’s desire to support the stock market, and for companies dependent on Chinese demand – is that they are determined to tackle the risk, having warned:

“China’s financial sector is and will be in a period with high risks that are easily triggered. Under pressure from multiple factors at home and abroad, the risks are multiple, broad, hidden, complex, sudden, contagious, and hazardous. The structural unbalance is salient; law-breaking and disorders are rampant; latent risks are accumulating; [and the financial system’s] vulnerability is obviously increasing.”

Companies and investors need to take great care in 2019.  China’s downturn means that markets are starting to rediscover their role of price discovery, despite the Fed’s efforts to keep waving its magic wand:

Once the tramline is broken, the Fed and the S&P 500 will find themselves in Wile E Coyote’s position in the famous Road Runner cartoons – with nowhere to go, but down.