As Naimi recognised, high oil prices created a short-term win for Saudi’s budget between 2011-4.  But they also allowed US frackers to enter the market – posing a major threat to Saudi’s control – whilst also reducing overall demand.  And his “boss”, Crown Prince Mohammed bin Salman (MbS) agreed with him, saying:

“Within 20 years, we will be an economy that doesn’t depend mainly on oil. We don’t care about oil prices—$30 or $70, they are all the same to us. This battle is not my battle.”

Today, however, Saudi oil policy has reversed course, with MbS now trying to push prices towards the $80/bbl level assumed in this year’s Budget.

Saudi’s dilemma is that its growing population, and its need to diversify the economy away from oil, requires increases in public spending. As a result, it has conflicting objectives:

The result, as the chart above confirms, is that prices are now at levels which have almost always led to recession in the past.  It compares the total cost of oil* as a percentage of global GDP with IMF data for the economy, with the shaded areas showing US recessions. The tipping point is when the total cost reaches 3% of global GDP. And this is where we are today.

The reason is that high oil prices reduce discretionary spending.  Consumers have to drive to work and keep their homes warm (and cool in the summer).  So if oil prices are high, they have to cut back in other areas, slowing the economy.

There has only been one occasion in the past 50 years when this level failed to trigger a recession. That was in 2011-14, when all the major central bank stimulus programmes were in full flow, as the left-hand chart shows.

They were creating tens of $tns of free cash to support consumer spending.  But at the same time, of course, they were creating record levels of consumer debt, as the right-hand chart shows from the latest New York Federal Reserve’s Household Debt Report.  It shows US household debt is now at a record $13.54tn. And it confirms that consumers have reached the end of the road in terms of borrowing:

“The number of credit inquiries within the past six months – an indicator of consumer credit demand – declined to the lowest level seen in the history of the data.”

SAUDI ARABIA IS NO LONGER THE SWING SUPPLIER IN OIL MARKETS 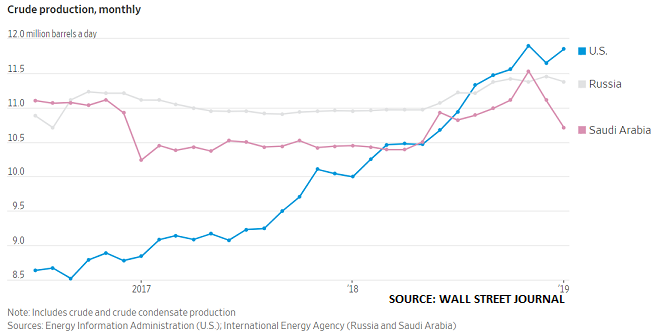 Oil prices are therefore now on a roller-coaster ride:

Now Saudi is trying again. It agreed with OPEC and Russia in December to cut production by 1.2mbd – with reductions to be shared between OPEC (0.8 million bpd) and its Russia-led allies (0.4 million bpd).  But as always, its “allies” have let it down.  So Saudi has been forced to make up the difference. Its production has fallen from over 11mbd to a forecast 9.8mbd in March.

Critically however, as the WSJ chart shows, it has lost its role as the world’s swing supplier:

Of course, geo-politics around Iran or Venezuela or N Korea could always intervene to support prices. But for the moment, the main support for rising prices is coming from the hedge funds.  As Reuters reports, their ratio of long to short positions in Brent has more than doubled since mid-December in line with rising stock markets.

But the hedge funds did very badly in Q4 last year when prices collapsed. And so it seems unlikely they will be too bold with their buying, whilst the pain of lost bonuses is so recent.

Given that Saudi has decided to ignore al-Naimi’s warning, the 2014-15 experience shows there is a real possibility of oil prices returning to $30/bbl later this year.

*Total cost is number of barrels used multiplied by their cost