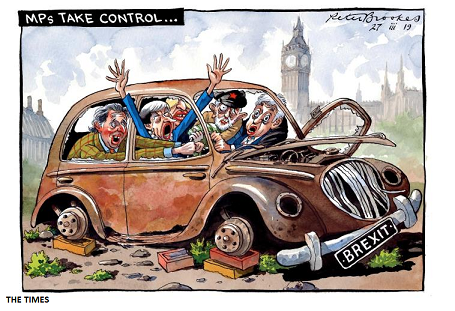 With the European Commission saying that a No Deal is now “likely“, small businesses across the UK and EU27 have begun to look forward to the opportunities that it will create, as this 1 April report from Ready for Brexit suggests.

Businesses across Europe are thrilled by the uncertainty of Brexit. “We’re absolutely loving it” said Colin Potts, whose Wolverhampton based company exports wall brackets. His wife and business partner Brenda agrees. “Because we mostly export to the EU, I’ve never had to fill in a customs declaration before – it’s something new and you know what they say, a change is as good as a rest,” she said.

In the event of a No Deal Brexit, UK/EU27 businesses will need to fill in an extra 400 million customs declarations a year, but that doesn’t faze Brenda. “Wow, 400 million! It’s exhilarating to be part of something that big”, she gushed. “As a small business owner, I have plenty of leisure time and am often bored. This is what I am looking for to fill those long empty hours.”

Pete Micklethwaite, who owns a road haulage company in Doncaster is also excited. “Will there be a deal, won’t there – it’s creating a real buzz. If there’s no deal our drivers will need three separate driving licences for some of our longer jobs and looking on the bright side, you can never have too many photo IDs.”

The EU nationals in Pete’s team aren’t missing out on the excitement either, he explains. “One of our longest serving drivers, Jim, who’s from Romania, asked me the other day whether if he sets off on a job on the continent he’ll be allowed back in. Some people take up gambling for that kind of thing but our lads just need to come to work, if they’ve still got jobs!”

“Some of the doom merchants were saying that we needed to be ready for a so-called cliff edge on March 29, but now we’ve got at least two weeks longer than that,” mused Brenda Potts. “These naysayers have obviously never run a small business and don’t understand the grinding boredom of being able to plan ahead.”

The opportunities of a No Deal Brexit aren’t passing haulier Pete by either. “A guy I know got involved with a ferry company with no ferries and still landed some big contracts. When he told me about it I had to check the date to make sure it wasn’t an April fool but it wasn’t. Now that’s entrepreneur-ship.”

If  you’re worried about the impact of a No Deal Brexit on your business, download the Ready for Brexit No Deal Survival Kit