After the excitement of Wimbledon tennis and a cricket World Cup final, Londoners were back to their favourite conversation topic last week – house prices. But now the news has become bittersweet as the price decline starts to accelerate.

“The London property slump has dramatically accelerated with prices falling at their fastest rate in a decade, official figures reveal… The latest “punishing” downward lurch means that more than £21k ($26k) was wiped from the value of the average London house over the period, according to the Land Registry… The number of sales is still in decline with just 5947 recorded in March, down from 7350 a year previously.” 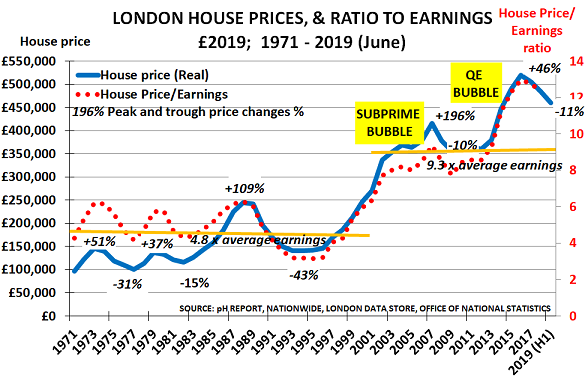 ‘Reversion to the mean’ is always the most reliable of investment guides, and the chart shows prices could have some way to fall before they reach this level – and, of course, prices often over-correct after the type of sharp rise that has been seen over the past 20 years:

WHY DID PRICES RISE?
London prices have been boosted by 4 main factors since 1971:

Demographics.  Most fundamentally, the BabyBoomers (born between 1946-1970) began to move into their house-buying years. This dramatically increased demand (as I discussed last week), whilst supply was slow to respond due to planning restrictions etc.

In addition, women began to go back to work after having children, creating the phenomenon of 2-income families for the first time in history. The younger Boomers saw the benefit of this as affordability rose; those who followed them paid the price in terms of higher prices.

Buy to let. London became the capital of ‘Buy-to-let’. UK tenancy law changed in 1988 and by the mid-1990s, parents realised it would be cheaper and better to buy apartments for their student children, rather than paying high rents for shoddy lodgings. Others followed in the belief that property was “safer” than stock markets”.

Falling interest rates (they were 15% during the 1992 ERM crisis) made the mortgage payment very affordable – particularly with tax relief as well. But since 2017, tax relief has been reducing, and disappears next year. And today’s ageing UK population, where nearly 1 in 5 people are now aged 65+, means the Boomers no longer have spare cash to spend on buying property.

The global city.  After the financial crisis, London property appeared an oasis of calm as the Bank of England supported house prices by cutting interest rates to near-zero, dramatically boosting affordability. Everyone knew by then that “house prices only increased”, as memories of the 1970-1980s were forgotten, and so capital gains seemed assured.

This made London, along with other “global cities” such as New York, very attractive to Russians, Arabs, Asians and anyone else who was worried that their government might try to grab their money. Europeans also bought as the eurozone crisis developed. And then the success of the 2012 London Olympics made it the city where everyone wanted to live, especially as its financial sector was booming due to central bank stimulus programmes.

WHAT WILL HAPPEN NEXT?
The question now is whether these drivers will continue.  Brexit, of course, has already cast a shadow over the idea of the UK as an island of stability in a troubled world. And whilst the collapse of the currency since the referendum makes property more affordable for foreign buyers, it means that those who bought at the peak are nursing even larger losses.

And, of course, the fall in the actual volume of sales is another worrying sign. Volume usually leads price, up or down. And housing markets aren’t like stock markets, where you can usually trade very quickly if you want to sell. Instead you have to wait for a buyer to appear – and even then, the UK’s property laws make it possible for them to pull out until the very last moment.

All in all, it would therefore be surprising if prices didn’t continue falling, back to the average house price/earnings ratio of the pre-1999 period. A temporary over-correction, where they went even lower, would also be normal after such a long period without a major fall.

Whether they go lower than this, and return to the 1971-99 ratio, probably depends on what happens with Brexit.  If those who believe it will open up a new ‘golden age’ for the UK economy are right, then  prices might well stabilise and could even rise again, after the initial disruption. But if it proves an economic disaster, then a return to the troubled period of the 1970s would be no surprise at all.

PREVIOUS POST G7 births hit new record low, below Depression level in 1933
NEXT POST UK, EU27 and EEA businesses need to start planning for a No Deal Brexit on 31 October