Home Blogs Day of reckoning approaches for US polyethylene expansions, and the European industry

Planning for future demand in petrochemicals and polymers used to be relatively easy during the BabyBoomer SuperCycle. The team would consult the latest IMF forecast for global and regional growth, and then debate the right ratio to use to calculate product demand.

For polyethylene (PE), the ratio was generally just above GDP at around 1.1x, on the basis that relatively more plastic was likely to be needed as the economy grew.

So when the US shale gas opportunity came along, producers were very confident that it would provide them with major cost advantage over most other Regions. And they were under major pressure to use the ethane that might be produced from the new natural gas production, as it is explosive when mixed with air in concentrations between 3% – 12.4%.

Essentially this meant the ethane was a distressed product, and had to be used in ethylene production, as there are no other major applications.

Since those early days, the US polyethylene expansions have been “an accident waiting to happen”, as I first argued when the plans were still being finalised in March 2014:

“US ethylene producers need to work out where all the new ethylene production is going to be sold before embarking on the planned frenzy of cracker construction”. 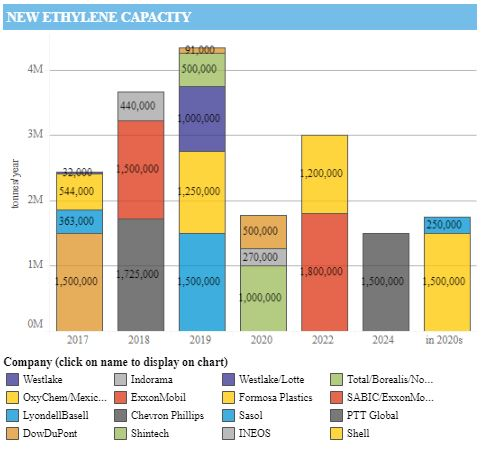 Unfortunately, the pressures from Wall Street to exploit the apparent opportunity were too great. One by one, companies gave in to peer pressure and announced expansion plans, as shown in the ICIS graphic – and were rewarded by sharp increases in their share price. As one CEO said to me at the time:

“You may be right, but every time I mention shale on an earnings call, the share price goes up $5.”

Our major Study, ‘Demand – the New Direction for Profit’, jointly produced with ICIS, took the analysis a stage further in March 2016, warning that:

“The supply-led business model – build capacity and wait for demand to catch up – will no longer work in today’s low- or-no-growth marketplace.”

And it really did seem obvious then that the key assumptions behind the expansions were wrong:

But companies went ahead anyway, due to the pressure from upstream gas producers to dispose of the product, and the enthusiastic support provided by investors.

The terrible hurricanes in 2017 postponed the moment of reckoning, as plants were delayed for months due to the damage.  But then, construction picked up again and most of the new capacity is now in place – and linked to new polyethylene capacity.

Polyethylene is the largest volume polymer, and the expansions are adding 40% (6.5 million tonnes) to US capacity between 2017 – 2019.  Other Regions are of course also expanding – particularly China, as it seeks to become more self-sufficient as a result of President Trump’s trade war. The ICIS price charts therefore show a depressing picture: 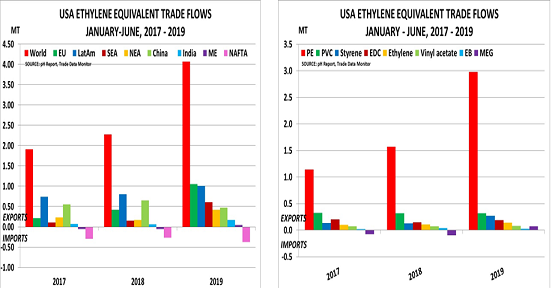 The reason is not hard to find, as the charts from Trade Data Monitor confirm.   Total H1 ethylene exports in the shape of PE, PVC, styrene, EDC, ethylene and other derivatives almost doubled to 4 million tonnes. And suddenly, Europe has become the main importer, with volume up from 420kt in 2018 to 1.05MT.  Most of the volume is in PE, which doubled to 3MT on a global basis.

And there is still more volume to come, with ExxonMobil now starting its new 650kt plant and LyondellBasell starting its new 500kt plant in Q4. That’s more than 1MT of new  PE output which will have to be exported into an already over-supplied market.

In addition, it is clear that public opinion and the new EU Circular Economy directive are already starting to have a major impact on demand for single use plastics. Unfortunately, over 50% of  PE output goes into this application, along with nearly a third of polypropylene.

Volume is already disappearing as consumers make the shift to more sustainable forms of packaging. It is clear that recycled material now has the potential to replace virgin product as the feedstock of choice in the future.

In turn, these paradigm shifts are creating Winners and Losers.  Next year is likely to prove very difficult for US PE exporters, as they face up to the fact that export demand has not grown as expected, and they do not have a major cost advantage.

As the picture of Fido the dog illustrates, polymer producers are the ‘flea on the tail of the oil/gas markets’:

Now is therefore the time for these producers to start accelerating moves to using recycled feedstock for their production.  In another 12-18 months, if prices and margins keep on falling at current rates, it may well be too late.