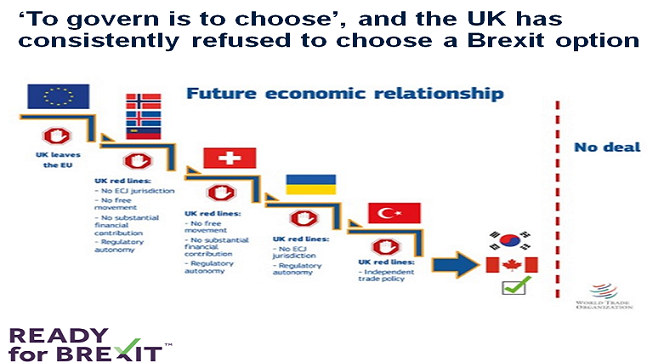 Finally, after three and a half years, the UK has reached “the end of the beginning” with Brexit, in Winston Churchill’s famous phrase.

Since the referendum, its leaders have consistently refused to confront the real choices that have to be made over what type of Brexit it wants to have:

As a result, the myth grew up that there was a wonderful option called ‘WTO terms’, which would allow the UK to do exactly as it liked on standards, regulations, freedom of movement etc. Yet it would still have complete access to the EU27 market without any need for quotas or Customs barriers.

Unfortunately for all those who have indulged in such wishful thinking, 2020 is likely to provide an abrupt and painful wake-up call.  Once the UK has left the EU in January, Johnson will have to make major choices, and on a very tight timescale.

The government’s key mistake all along was to table its Article 50 notification to leave without having first decided what it wanted from the new relationship with the EU27. And by dismissing the role of “experts” and key Brussels negotiators such as Sir Ivan Rogers, it also never properly understood what might be possible from an EU27 perspective.

Now the need for choices is going to become apparent, as the Transition Agreement only runs to December 2020, and any request for an extension has to be agreed by June.  Johnson has said he will not ask for an extension, and so this narrows the choices:

One likely example of a deal-breaker is fisheries policy.

Fishing accounts for just 0.1% of the UK economy, and employs only 24k people out of a total workforce of 33m. And contrary to popular belief, not only have foreign boats been fishing in UK waters for centuries, but 70% of the fish eaten in the UK is imported (cod etc) – with 80% of fish caught by UK fishermen  exported (herring, shellfish etc).

But it was core to the Leave campaign, and Johnson is likely to find it hard to ignore – even if that means fishermen end up facing quotas, tariffs, Customs barriers and a collapse of conservation policies.

Johnson is happy to break promises, as he did over N Ireland when agreeing to the EU27’s terms for the Withdrawal Agreement. But it would be rather soon after the election to break his promise over fishing or, indeed, his promise not to extend the Transition period.

As a result, Theresa May’s legacy will finally be fulfilled, as No Deal remains the default option.  And at that point, the UK will learn very painfully that you really cannot “have your cake and eat it”, despite Johnson’s claims to the contrary.