Spot LNG markers for May delivery cargoes held pretty steady during the four weeks from mid-March to mid-April, with markets comfortably supplied following the end of the east Asian winter and with no major unexpected outages, although there was planned work in Australia, and Papua New Guinea’s LNG plant remained out of action.

East Asia Index (EAX) prices were down from the previous month though, as the market moved further into summer and Japanese and South Korean utilities were heard to have high storage levels. The EAX May average was $7.219/MMBtu, down 15% from the April average, but up 32% from the previous year. The annual increase reflects stronger conditions in the oil market, to which many long-term LNG contracts are still tied, with crude oil trading around $11-12.50/MMBtu this year against $8.70-9.70/MMBtu at the same time last year.

Oil prices set the background conditions for the spot market because many importers can choose between taking extra cargoes under their long-term contracts, or purchasing additional volumes in the spot market.

Australia’s 9.0 mtpa APLNG plant held planned shutdowns of its two trains during March to April, but this was partially compensated by higher run-rates at the neighbouring 7.8 mtpa GLNG plant, as the APLNG outage freed up gas supplies. The 8.6 mtpa Papua New Guinea plant, shut after an earthquake on 26 February, saw one of its two trains return to service at the very end of the period, announced by ExxonMobil on 12 April.

On the demand side there were some delays to expected nuclear power plant restarts in east Asia. Japan’s Kansai Electric is making progress with the restart of two 1.2 GW units at its Ohi plant. But the country’s Kyushu Electric suffered a steam leak while restarting its 1.2 GW Genkai 3 unit, which could also delay the planned return of the 1.2 GW Genkai 4. Taiwan’s Taipower also encountered some difficulties restarting its 1.0 GW Kuosheng 2 reactor, which has been off since May 2016.

The South America Index (SAX) for May averaged $6.921/MMBtu, only 30 cents below the EAX, as regional buyers came into the market with a string of spot tenders to secure supplies for the southern hemisphere’s winter.

Argentina’s ENARSA has issued four tenders so far, first calling for nine cargoes during April-June, then 22 during June-August, then 7 for May-June, followed by 18 for July-August. Mexico’s CFE has also been active in the tender market, including a call for seven cargoes into its Pacific coast Manzanillo terminal, for which prices were at parity with the EAX.

The Northwest Europe Index (NEX) for May averaged $6.367/MMBtu, some 85 cents below the EAX. That difference means that cargoes produced from Middle East suppliers such as Qatar, with roughly equal shipping distances to east Asia or western Europe, should continue to prefer supplying east Asia when it has demand. But Atlantic cargoes might prefer to deliver into Europe rather than pay the shipping to head further east, and there is little incentive to reload cargoes from Europe to Asia.

March and April already look set to see an increase in cargoes to Europe compared with the peak east Asian demand months of January and February, when the EAX/NEX spread had been as wide as $4.00/MMBtu. Europe needs to take in gas to refill its underground gas storage facilities after a cold winter.

The UK drew in the first ever shipment from the new US Cove Point facility, aboard the 138,000cbm Gemmata, at Dragon on 21 March. The same terminal took in the UK’s second US Sabine Pass cargo aboard the 152,000cbm British Ruby on 5 April and the country’s first Egyptian cargo since 2012 aboard the 162,000cbm Maran Gas Apollonia on 9 April. Norway, Trinidad and Qatar have also been supplying the UK. 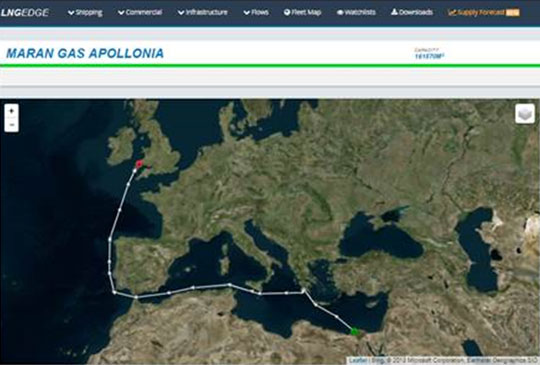 Looking forward, the market is waiting for new floating production units to enter the market. The 141,000cbm Galicia Spirit is in position to pick up the first cargo from the now-in-production Kribi LNG project offshore Cameroon. The 134,000cbm Gallina has travelled from Peru to northwest Australia with a cargo possibly intended to help commission Shell’s giant Prelude vessel. The second 4.5 mtpa train at Australia’s onshore Wheatstone facility is also due to enter service this summer, while the country’s floating Ichthys project could begin this summer or later in the year.

In the nearer term, after delivering its first cargo on the Gemmata to the UK, operators declared the US Cove Point facility in commercial operation in early April. India’s GAIL, which recently received its first long-term contract cargo from the US Sabine Pass facility on the 166,000cbm Meridian Spirit to Dabhol on 29 March, has swapped a string of cargoes from Cove Point with trading company Gunvor. The market will be watching to see where this additional supply from the US finds a home.

Spot LNG markers for front-month delivery held pretty stable over the past four ...

Spot LNG markers for June-delivery cargoes gained 10% on the month and 40% on th...