By Froley Alex on 17th October 2018 in Energy
SHARE THIS STORY
Spot LNG prices in east Asia fell back slightly over the four weeks from mid-September to mid-October, according to the ICIS East Asia Index (EAX). A softer market in Asia reduced the region’s premium to European gas prices and helped to attract increased flows of LNG into the northern European gas markets for early winter.

The front-month November EAX price opened the period at $12.25/MMBtu in mid-September, the highest level for the front-month EAX so far this year. The market was strong after heavy buying in recent months, including from Japan as air-cooling demand increased during a summer heatwave. However, spot prices soon dipped back below $12/MMBtu, and after holding steady over $11.00/MMBtu for most of the period, fell to $10.05/MMBtu by mid-October. Buying interest has dipped for the moment, although it could reappear later in the winter if the weather is cold.

In the meantime, there was the prospect of new supply entering the market by mid-October, with talk that Australia’s Ichthys LNG project was set to start up deliveries. The Ichthys project is located off northwest Australia and has a floating gas production unit delivering volumes to an onshore facility at Darwin for liquefaction in two 4.5m tonne/year liquefaction trains. The 182,000cbm Pacific Breeze LNG tanker was berthed at the Darwin facility in mid-October looking set to load a cargo.The EAX averaged $11.229/MMBtu across the month, down 3% from the previous month’s average, but up 36% from the previous year. The annual gain reflects stronger energy markets overall, with crude oil prices up around 44% for the same period to average $13.11/MMBtu. Many long-term LNG import contracts are still index-linked to oil, so rises in the oil markets feed through to spot LNG as traders optimise between long-term and spot LNG volumes.

There was a noticeable increase in LNG cargoes heading towards northern Europe, including some from new suppliers to the region. On 16 October, the Dutch Gate LNG terminal in Rotterdam received its first cargo of Peruvian LNG from the 138,000cbm Methane Kari Elin. The country’s first cargo from Angola is also heading towards Gate, on the 160,000cbm Malanje, and is expected in late October. 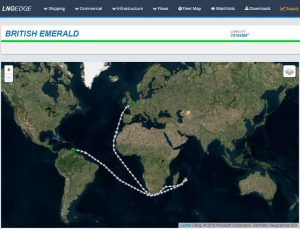 A number of Qatari cargoes are heading to the UK’s LNG terminals, along with a Trinidadian cargo from BP to the Grain LNG terminal on the 152,000cbm British Emerald. This had initially looked set to head to east Asia, before turning around in the Indian Ocean and making its way to Europe instead.

With Australia’s Ichthys LNG project now looking set to enter the supply market, attention will switch to the start-up of the nearby Prelude project. Shell, the operator of Prelude, has also been hoping for first cargoes this year. A number of US LNG production projects are also due on stream in the coming months, including the fifth train at Cheniere’s Sabine Pass project, and the first train from the company’s Corpus Christi facility.

The biggest supply news of last month was the decision by Shell and its partners to go ahead with the 14mtpa LNG Canada project, which is expected to enter into operation in the middle of the 2020s. The project will be Canada’s first major LNG export facility. Located on the west coast of the country, it has access to Asia’s spot gas markets without crossing the Panama Canal, unlike facilities in the US Gulf of Mexico. If China and the US continue their current trade war, it also has the comparative advantage of being outside the scope of newly-imposed Chinese tariffs on US LNG.

Spot LNG prices in Asia remained firm across the mid-August to mid-September per...

Spot LNG prices in east Asia have fallen back rapidly over the last eight weeks,...