Continued mild weather in Asia and Europe over the last four weeks has seen global spot LNG prices continue their decline. It has also opened up questions about how low the market could settle in the summer if high inventories at the end of winter reduce the need for restocking over summer, at the same time that new production facilities are entering the market.

The East Asia Index (EAX) for March spot deliveries to Japan, China, South Korea and Taiwan fell from $8.05/MMBtu in mid-January to $6.35/MMBtu in mid-February, as the key LNG importers in the east Asia region saw relatively mild temperatures which reduced the need for gas heating. The EAX was down 17% from the previous monthly average, and down 30% from the same time a year earlier.

Spot gas prices have increasingly diverged from oil. In December, the spot LNG price in Asia was more or less at parity with crude oil at around $9.00/MMBtu. But in the first six weeks of 2019, crude oil has strengthened to over $11.00/MMBtu while spot LNG has fallen back. This means that spot LNG purchases could be an attractive option for a buyer compared to taking additional cargoes under a flexible, but oil-linked, long-term contract.

The South America Index (SAX) fell back in line with the EAX, averaging $7.072/MMBtu over the four-week period. The region is not yet in its peak winter demand period, although there are some signs of increased interest from Brazil after lower rainfall reduced hydropower potential.

The Northwest Europe Index (NEX) has traced a similar path, although it remains at a discount to both Asia and South America. The NEX averaged $6.510/MMBtu over the last four weeks, some $0.784/MMBtu below the EAX. The premium held by Asian markets is not sufficient, however, to cover the extra cost of shipping an Atlantic cargo to the Pacific, so Atlantic-based producers will continue to favour deliveries into European markets in the near term.

The reduced competition from Asia has seen Europe receive strong levels of LNG in recent months, particularly from Atlantic-based producers, such as Russia’s Yamal LNG project, which must send its ships west towards Europe during winter, when the ice is too thick for even its specialised ice-breaker tankers to head east to Asia.

There have been strong US LNG volumes to Europe, boosted by some output from Sabine Pass train five and Corpus Christi train one, although these have been out of action in recent weeks. The older liquefaction trains at Sabine Pass also reduced their rates for a few days in early February when foggy conditions in the local ship channel restricted loadings, putting pressure on storage tank capacity.

Cargoes from west Africa have also been coming to Europe, with Angolan volumes heading to the Netherlands, France and Spain in recent weeks, and Cameroon shipping its first ever cargo to northern Europe, with an expected delivery to the UK. 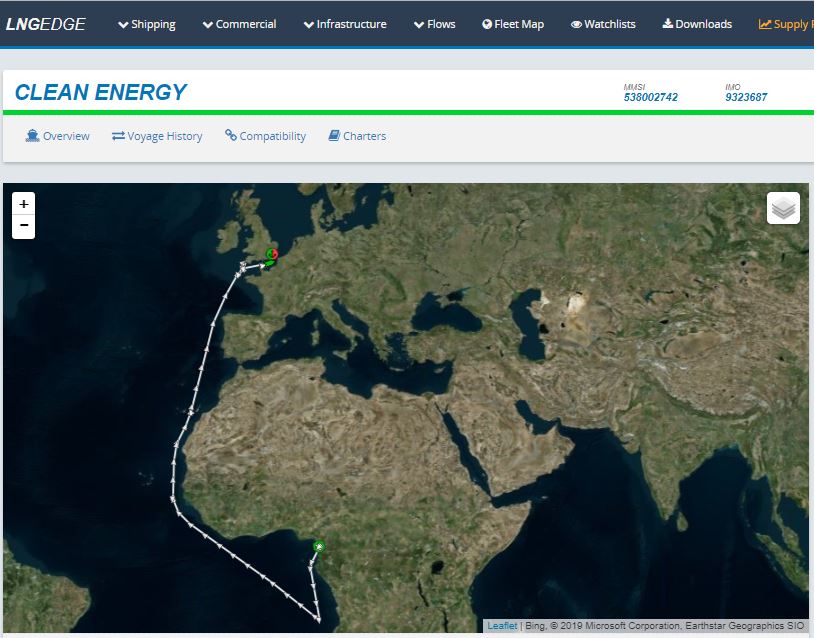 LNG Edge shows the Clean Energy carrying a cargo from Cameroon to the UK’s Grain LNG terminal for mid-February. This is the first Cameroon cargo to northern Europe. Russia’s Gazprom has a contract for all offtake from Cameroon, but may not be directly delivering this cargo as it could have sold it on to someone else.

At the turn of the year, European gas traders were worried that the winter could end with a repeat of the “Beast from the East” cold weather system seen in late February 2018. But temperatures remained mild in mid-February, with the UK seeing some unusually warm spring-like weather and storage stocks across Continental Europe were higher than at the same time last year. Unless there is an unexpected prolonged cold snap, this year seems likely to end winter at much higher levels than a year earlier, reducing the need for restocking over summer 2019.

Reduced demand could combine with improved supply from new US production plants to put further downward pressure on Europe’s spot gas markets over the coming months. This in turn could exert a bearish pull on the EAX as Asian buyers will be able to drop their prices in line with Europe, while continuing to maintain a thin premium sufficient to draw Middle East cargoes from producers, including Qatar, to the Pacific.

US output will see a huge boost this summer as Sabine Pass train five and Corpus Christi train one return to full output after completing commissioning checks, followed later in the year by the expected start up of liquefaction trains at Elba Island, Cameron and Freeport. Offshore Australia, Shell is also still working to produce the first LNG cargo from its 3.6m tonnes/year floating Prelude production plant, although a date has yet to be confirmed.

There have been some production outages in recent weeks, although not enough to support spot prices. Australia’s Gorgon train three has been out from mid-January for operator Chevron to carry out maintenance. A restart date has not been announced. Woodside said there was a brief outage at its Australian Pluto plant, although that did not last as long as the Gorgon outage.

Meanwhile, there are also new import facilities set to enter the market soon. In the Middle East, Bahrain is expecting to receive the Bahrain Spirit floating storage and regasification unit soon at the country’s first import facility. In the meantime, India is set to start up its first east coast LNG import terminal. Indian Oil has carried out a successful tender to secure a commissioning cargo for this regas facility at Ennore.

The global spot LNG market remained in a bearish mood from mid-December to mid-J...

Global LNG markers dropped below $6/MMBtu over the last four weeks, with prices ...

Spot LNG prices in east Asia softened over the past four weeks on indications of mild weather for th...

The 5.0 million tonnes per annum (mtpa) US Freeport LNG train one was getting ready to load its firs...

Spot LNG prices held below $5.00/MMBtu in the four weeks from mid-June to mid-July on the back of co...

This article was written by Harriet Roberts. It discusses the findings of the ICIS European Energy M...