Spot LNG prices in east Asia softened over the past four weeks on indications of mild weather for the winter ahead and against a background of strong global supply growth.

The ICIS East Asia Index for December deliveries to Japan, South Korea, China and Taiwan was at $6.75/MMBtu on 16 October, rose to as high as $7.05/MMBtu a few days later, then gradually drifted lower to $5.30/MMBtu on 15 November, its expiry as the front-month.

The December average was $6.185/MMBtu. This was up 6% from the month before, but over the course of the month the trend was downwards. The average, meanwhile, was 41% lower than the year before due to the large amount of production capacity that has been added over the past twelve months, particularly from US projects including Corpus Christi, Freeport and Cameron.

The Japanese Meteorological Agency has given a 50-70% chance of milder-than-normal weather for November to December. This could reduce demand for gas-fired heating. Early indications from agencies in Japan, China and South Korea have suggested the winter as a whole may be on the mild side this year.

Recent nuclear power production is down on the year in both Japan and South Korea, due to the scheduling of planned maintenance work, including at South Korea’s Hanbit and Wolsong plants. South Korea is also considering plans for coal plant closures over coming months to improve air quality. These factors should act as a boost to gas-fired power production, but the bullish impact has been counter-balanced by the global supply growth.

Europe remains a sink market for excess cargoes, particularly for surplus production from the Atlantic Basin. The length on the supply-side of the market has been indicated by the long durations over which some vessels have delivered their cargoes.

For example, the 174,000cbm Marshal Vasilevksiy, lifted a cargo from the Dutch Gate LNG terminal on 18 August, then held it in storage until it delivered it back into Gate on 4 November. The 139,000cbm Golar Arctic picked up a Russian Yamal cargo in a ship-to-ship transfer at Gate on 1 September, then circled around northern Europe and southern Spain until 17 November, when it finally delivered the cargo into the UK’s Grain LNG terminal, a journey it could have made in a day, rather than two-and-a-half months. 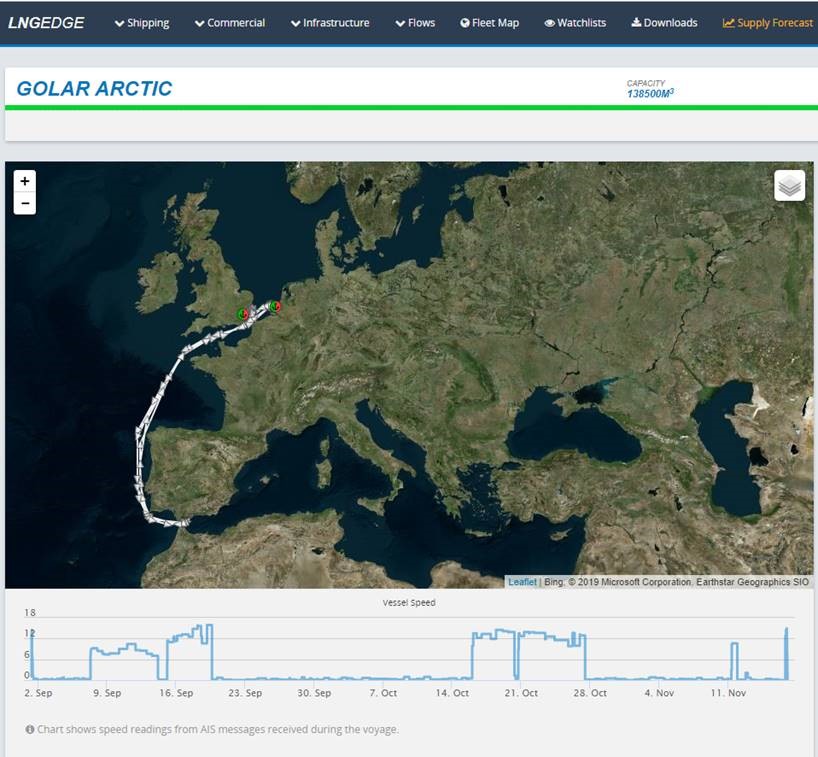 Europe’s onshore gas storage facilities are approaching capacity due to the strong volumes of LNG received in recent months boosting summer injection rates. There have been no major cold spells or supply shocks, such as infrastructure failures, in the first half of November in the region.

The ICIS Dutch TTF price for gas in northwest Europe in December averaged at $5.355/MMBtu. This was some 83 cents below the EAX for December, which made east Asia the premium market, but was not a large enough difference to act as a strong incentive for Atlantic-origin cargoes to move to the Pacific.

The ICIS South America Index (SAX) averaged $5.407/MMBtu from mid-October to mid-November, moving largely in line with the TTF across the four weeks.

The freight market has eased somewhat after the threat of US sanctions on a Chinese shipping company was lifted in recent weeks. In mid-November ICIS assessed prompt Atlantic charter rates at $125,000/day and prompt Pacific rates at $107,500, both for a modern vessel.

Australia has some ongoing maintenance work on a 5.2 million tonnes per annum production train at Gorgon, lasting until the end of November. Trinidad & Tobago’s 3.1mtpa Atlantic LNG train one is also undergoing maintenance, due to last until early December. There have been some brief dips in feedgas flows at various US plants, indicating reduced production, with the latest a drop in feedgas flows into the 5.0mtpa Freeport LNG train one to almost zero around 16-17 November.

Spot LNG prices over the past four weeks for January 2020 cargoes to Asia averag...

Spot LNG prices continued to strengthen from mid-September to mid-October as the market takes an inc...

Spot LNG prices strengthened from mid-August to mid-September on the back of ongoing repair work in ...