Spot LNG prices remain at historically low levels, the result of ongoing structural oversupply in the market after recent years in which new supply project additions outpaced the growth in global demand. The continuing coronavirus pandemic has exacerbated the effect, by further weakening demand, removing the growth that otherwise might have helped tackle part of the oversupply.

Nevertheless, as news emerged of significant cargo cancellations from US export projects, spot LNG markets showed a slight turnaround in early May, beginning to edge a little higher as a result of the action being taken to re-balance the market. 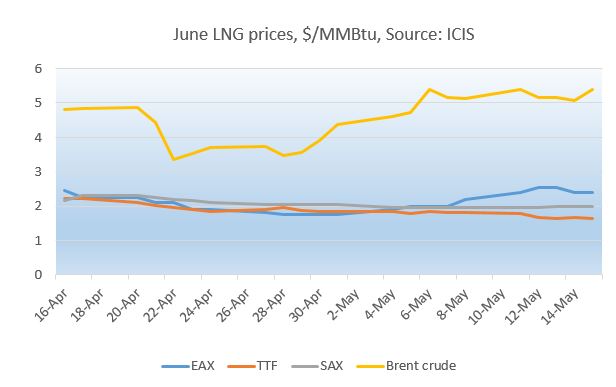 The ICIS East Asia Index for June-delivered cargoes averaged $2.098/MMBtu in the four weeks from mid-April to mid-May. That was down 61% from last year and down 26% from the previous month. But prices showed some gains in May. The EAX rose from an all-time low of $1.750/MMBtu at the end of April to $2.400/MMBtu in mid-May.

The gains came as news emerged of major cargo cancellations from US export facilities for June, with market sources expecting over 20 cargoes to be cut, and some estimates considerably higher. The first physical confirmation of US reductions was also emerging as daily feedgas rates showed falls in the amount of natural gas being piped into US liquefaction facilities. In late March gas had still been feeding into US plants at near-record rates of around 9 Billion cubic feet/day (255 million cubic metres/day). But by mid-May feedgas was down to only 5.5 Bcf/day (155mcm/day), a reduction of almost 40%.

The ICIS South America Index (SAX) for June averaged at $2.061/MMBtu during the four-week period, while the ICIS TTF benchmark for European gas markets averaged at $1.871/MMBtu.

Spot gas prices remain below crude oil prices in a direct comparison, with Brent crude averaging $4.528/MMBtu across the period. Although oil prices have been falling massively, long-term LNG bought on oil-linked contracts will still remain more expensive than spot-priced LNG for the moment, particularly given that oil-indexed contracts usually build in a time-lag for the oil price indexation to feed through.

As an example, customs data added to the ICIS LNG Edge platform shows that in March 2020, the latest available data for the country, Japan was still receiving many long-term LNG cargoes at prices of around $9-10/MMBtu on oil-linked contracts. The EAX spot price average for March-delivered cargoes was only $3.611/MMBtu. 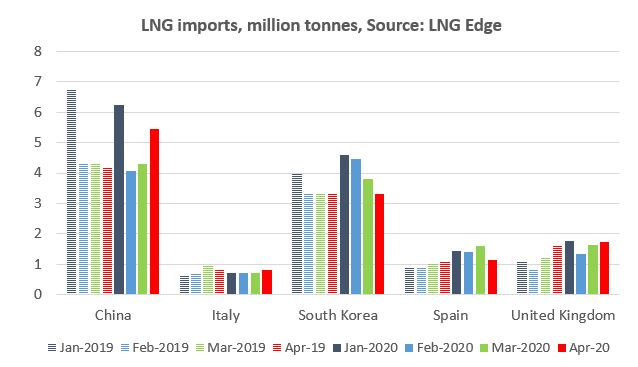 LNG imports into China, the first country to suffer the coronavirus, showed a surprise rebound in April 2020, gaining 27% on the previous month and 32% on the same month last year to 5.5 million tonnes. This followed year-on-year declines in imports in January and February and largely unchanged volumes in March.

Overall China’s Q1 2020 imports had dropped 5% from the same period of the year before, bringing an end to a prolonged period of rapid growth.

LNG provides a supply of natural gas for use in power generation, heating and cooking. These are all essential activities, so much demand remains robust despite the coronavirus. Industrial consumption of gas is, of course, affected, but gas is not as widely used in the transport sector as oil, so is not affected as much as oil by the grounding of airlines and restrictions on road traffic. But current circumstances leave the market unable to absorb the large volumes of new supply that have entered the market in recent years.

Continued changes in spot market conditions have seen new vessel movement patterns in the global shipping market. One recent feature has been Nigerian cargoes taking longer to reach their destinations than normal, acting as a form of floating storage to reduce market oversupply. For example, the LNG River Niger departed Bonny, Nigeria on 20 March, and was still waiting to deliver two months later on 15 May, on an apparent course to Hazira in India. 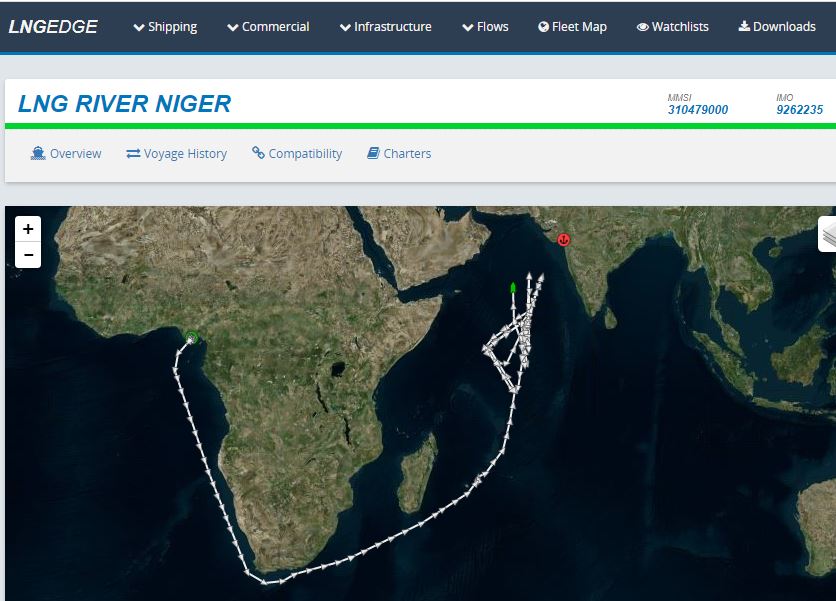 Meanwhile, the Maran Gas Ulysses, carrying a cargo from Equatorial Guinea, has made several course changes while its operators decide on the best destination for the supplies on board. 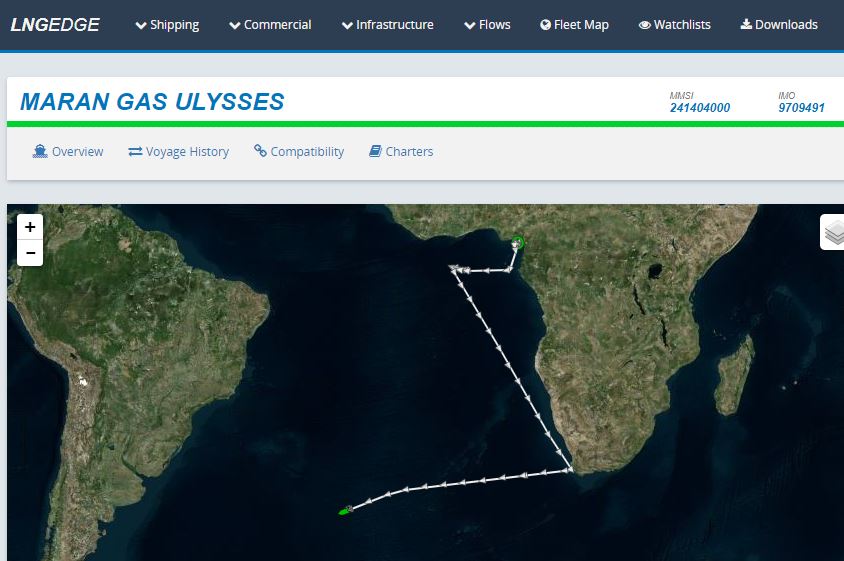