Get the latest data, tools and insight for purified terephthalic acid (PTA) with ICIS pricing and market intelligence.

Our short-to-long-term solutions – from pricing, analytics, industry news and supply and demand data –
ensure that you can evaluate PTA markets from every angle.

Supply in China continued to trend higher amid a relatively constant operating rate, while supply outside of China stayed snug, especially in India. The region saw a total production loss of around 1.34m tonnes due to several shutdowns, with around 138,000 tonnes of PTA production loss coming from unplanned shutdowns.

Planned PTA shutdowns at Indorama’s plants in Portugal and the Netherlands took place in October, November and December, but both sites encountered difficulties along the way. A power failure caused a brief, but impactful shutdown of BP Chemicals’ 1.37m tonne/year site in Belgium in early November. Soaring freight costs and the container shortage delayed arrivals from Asia, impacting availability in the Q4 market.

Requirements for PTA into the bottle market reduced as downstream PET shutdowns took place and lockdowns took hold once more. There were moments when demand returned as buyers delved into the PET market for fear of supply restrictions.

US PTA supply during the fourth quarter of 2020 was ample due to reduced domestic PET production stemming from a shortage of monoethylene glycol (MEG). Operating rates were adjusted to reduce oversupply. Prices were soft, given the low crude prices that kept feedstock paraxylene values low.

US PTA supply in the first quarter of 2021 is expected to remain sufficient as resin plants return to normal operating rates after a period of monoethylene glycol (MEG) shortage that resulted in reduced PTA production in the previous quarter. Prices may gain momentum as demand from downstream PET resin sector is expected to remain strong.

US PTA demand in the first quarter of 2021 is likely to be strong, supported by sustained robust demand from polyethylene terephthalate (PET) for production of face shields, personal protective equipment (PPE) as well as drinks and food packaging. Demand is expected to be strong for as long as the pandemic is not under control.

Whether you are buying or selling PTA, ICIS provides you with the right pricing data, analytics, news and market analysis you need to confidently plan and make your trades, as well as shape future strategies and maintain a competitive advantage. 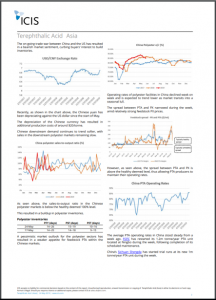 Each ICIS PTA pricing subscription comes with analytics tools that take away the hassle of developing your own analysis. Quickly access data such as:

Stay on top of terephthalic acid (PTA) markets across all regions with ICIS news.

Get a long-term view of the market with the ICIS Supply and Demand Data Service, which offers end-to-end perspectives of the PTA markets. 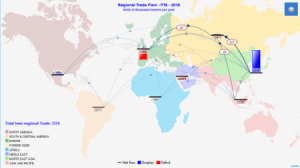 analysts and risk managers to:

Interested to find out how we derive our prices? Find out more about our PTA methodology coverage here

BARCELONA (ICIS)--The closure of the Suez Canal is heaping further pressure on chemical supply chains which are already suffering from product shortages amid strong demand. Suez blockage adds to...

SINGAPORE (ICIS)--Thailand-listed Indorama Ventures Ltd (Ltd) expects demand recovery for its products to continue this year after it swung to a net profit of Thai baht (Bt) 1.61bn ($54m) in the...