Get the latest data, tools and insight for toluene with ICIS pricing and market intelligence.

Our short-to-long-term solutions – from pricing, analytics, industry news and supply and demand data –
ensure that you can evaluate toluene markets from every angle.

Supply in northeast Asia was mixed. In the beginning of Q2, downstream margins from toluene disproportionation (TDP) production was healthy, which boosted domestic demand in northeast Asia and left fewer available cargoes for export. However, the arbitrage window between the US and Asia closed later in Q2, which left more cargoes in this region. In southeast Asia, supply remained ample, with few plant turnarounds taking place.

Import demand in northeast Asia increased at the start of Q2, especially in China, as some domestic plants were shut for planned turnaround. However, with most plants resuming operations in May, the import demand subsequently decreased. Squeezed margins in the domestic markets also weighed on buying sentiment. Downstream consumption in the domestic markets slowed amid the increase in COVID-19 infections, with stricter travel restrictions leading to a decrease in demand in southeast Asia and India.

TDI supply was mixed in Q1 after the region’s largest producer, BASF, closed its Ludwigshafen plant in Germany in mid-March for maintenance after a three-month closure in late 2020. Outages at US plants following winter storms in mid-February and logistics issues further tightened supply.

TDI demand was relatively healthy in Q1 as the buying appetite for mattresses and furniture continued to beat expectations, spurred by a boom in home improvements linked to the coronavirus pandemic. In some cases, however, TDI demand was capped by limitations on polyether polyols supply, which constrained foam production. Automotive demand for flexible foams fluctuated.

Supply started the quarter tight and that continued into May. This was due to planned turnarounds and unplanned outages at refineries and crackers leading to lower production levels with the market not having sufficient inventory levels amid strong demand. Operating rates later rallied with a number of plant restarts later in the quarter resulting in better availability. In general, supply in Q2 was considered to be tighter than the previous quarter.

Q2 demand started off healthy, supported by exports to the US and Asia, and downstream chemical sector due to healthy conversions with benzene and good demand from TDI. Demand started to decrease as conversion margins narrowed, arbitrage windows closed and an outage at a TDI plant. Gasoline blending demand throughout the quarter has been dull. Overall Q2 was considered to have had better demand than Q1.

Supply lengthened during the latter part of Q2 coming off of a tight first half of the quarter as derivative benzene and mixed xylenes supplies outpaced demand as key US Gulf Coast production centres resumed after the Q1 polar storm.

Demand was strong for most of the quarter, with volumes mainly going into toluene disproportionation unit production on stronger spreads with derivative benzene. Fuel blending activity ahead of and during the highly anticipated US summer driving season also supported toluene consumption.

Whether you are buying or selling toluene, ICIS provides you with the right pricing data, analytics, news and market analysis you need to confidently plan and make your trades, as well as shape future strategies and maintain a competitive advantage. 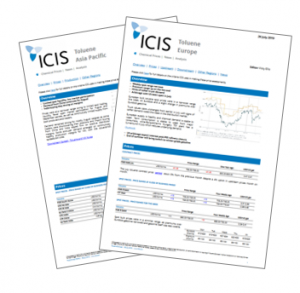 Each ICIS toluene pricing subscription comes with analytics tools that take away the hassle of developing your own analysis. Quickly access data such as: 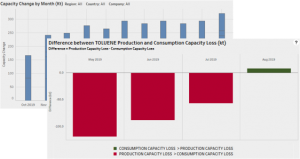 Stay on top of toluene markets across all regions with ICIS news. 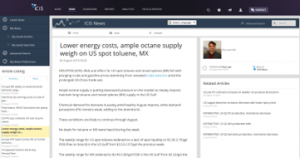 Get a long-term view of the market with the ICIS Supply and Demand Data Service, which offers end-to-end perspectives of the toluene markets. 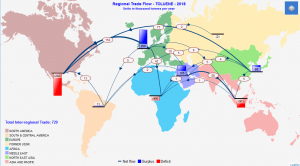 analysts and risk managers to: