ICIS price reporting for regional Vinyl chloride monomer markets is unparalleled in its ability to keep you on top of the information you need.

Our network of price reporters delivers direct and regular insights into the local markets they work in.

Use ICIS information to: 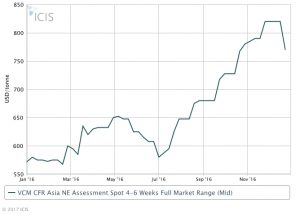 Supply in southeast Asia is expected to remain slim amid Indonesia’s Asahimas Chemical’s scheduled maintenance at its No.3 line in January. On the other hand, supply in northeast Asia may improve as operating rates at LG Chem’s VCM unit in Yeosu, South Korea return to normal, following resumed operations at the company’s upstream cracker in the same complex.

With most VCM volumes being used into the production of PVC, market fundamentals are likely to follow PVC market trends. Downstream PVC demand in China and some other Asian countries is expected to slow in early Q1 due to the week-long Lunar New Year holidays mid-February. Nevertheless, post-holiday restocking activities for both VCM and downstream PVC may recover quickly on positive economic expectations.

Supply is expected to rise in Q1, as production issues from 2020 have for the most part been resolved. INOVYN’s force majeure at Rafnes was lifted in December, and Spolana’s shutdown in the Czech Republic was also resolved earlier in Q4. A capacity expansion is scheduled by Vinnolit from 2020-2021 although no further details were available.

Demand is expected to stay fairly steady, alongside similarly steady demand for PVC during the winter months. Though construction activity and PVC demand will remain mostly steady, it is expected to be somewhat muted by inclement weather, possibly impeding construction activity during the early part of Q1. Seasonal demand pickup usually begins in March.

If you want to keep updated on the factors driving price movements in the global chemical markets, ICIS Chemical Business provides a summary of the information you need to support your business decisions. Every week, our global team of experts digests and summarises the key issues and their potential impact on the market – all in one magazine.

Over 25 years of reporting on key chemicals markets, including Vinyl chloride monomer, has brought global recognition of our methodology as being unbiased, authoritative and rigorous in preserving our editorial integrity. Our global network of reporters in Houston, London, Singapore, Shanghai, Guangzhou, Mumbai, Perth and Moscow ensures unrivalled coverage of established and emerging markets.

We offer unbiased and independent price reporting, with our price assessments being widely quoted as benchmarks in contracts.

Our information is collected from market participants by our global network of reporters, delivering unrivalled coverage of established and emerging markets, including China and Asia.

ICIS price assessments are based on information gathered from a wide cross section of the market, comprising consumers, producers, traders and distributors. Confirmed deals, verified by both buyer and seller, provide the foundation of our price assessments, giving you a robust reference for your negotiations.

ICIS collects pricing data on a wide range of chemical, energy and fertilizer products, including Vinyl chloride monomer. Our extensive experience in price reporting means we can offer you access to historical data dating back more than 20 years for certain commodities.

Our time series of pricing data enables you to build and model trends, to get a view of where markets might be heading. The data service includes charting functionality, allowing you to chart and download multiple data series for manipulation in your own internal models. You can also export data to Excel via the ICIS dashboard service.

MOSCOW (MRC)--Russia’s production of polyvinyl chloride (PVC) in the first quarter decreased 3%, year on year, to nearly 260,000 tonnes, according to MRC ScanPlast. In March, several producers...

Click here to see the latest blog post on Asian Chemical Connections by John Richardson, which discusses the recent Iran-China deal. Iran could end up with an 85% share of China’s total low density...