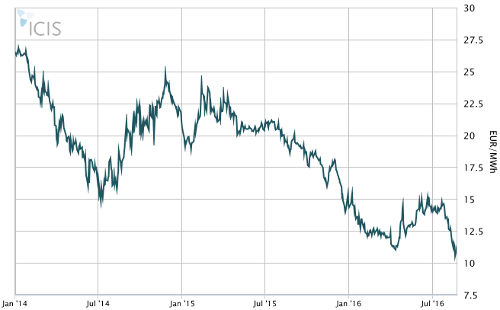 information and in-depth analysis, along with commentary and news. Information, such as price assessments and indices, can be easily accessed on the ICIS Dashboard.

Our network of reporters in Europe, China, Singapore and the US delivers local insights for many hubs and markets, published across a wide range of gas reports. ICIS is an established source of essential pricing information, used by key players in the global markets. In particular, the NBP Heren Index and TTF Heren Index are key global benchmarks for the European natural gas markets.

We offer the following regional Gas analysis and news coverage to keep you informed of factors and developments affecting prices in the Gas marketplace.

ICIS Heren publishes Continental Gas Snapshots (CGS) on every working day of the year in Britain.

ICIS publishes the Industrial and Commercial Energy Snapshot (ICES) on every working day of the year in Britain. ICES provides a concise, one page snapshot of the key power and gas prices in Britain

Natural gas is commonly produced alongside oil or other hydrocarbons and can also be found deep underground within rock formations. An increasing amount of gas production stems from non-conventional sources, such as from coal-bed seams or from within shale formations. Natural gas is predominantly formed of methane.

Uses include acting as a raw material for power generation, a source of heating and a chemical feedstock for organic chemicals or plastics.

Natural gas is predominantly odourless but varying odorant may be added depending on the specific country to alert users of a leak. Gas normally dissipates in the event of a leak but can cause an explosion as it becomes flammable when mixed with air.

Natural gas is transported by pipelines which can run along the seabed or underground, potentially transporting the energy source thousands of miles. The fuel moves at a speed of around 25km/hour through the pipe.

It is typically stored in depleted gas reservoirs or salt caverns. A certain volume of gas is kept within pipeline networks in order to maintain pressure. This is called linepack.

LONDON (ICIS)--The Energy Community urged the Ukrainian government to undertake a thorough analysis of proposals to place the natural gas and electricity transmission system operators under the...

LONDON (ICIS)--Companies are advised to start pumping gas into Ukrainian storages as soon as the injection season kicks off at the beginning of April to avoid causing congestion later in the year,...

LONDON (ICIS)--The Romanian energy exchange BRM is considering a lawsuit against the EU’s directorate-general for energy (DG Energy) amid growing frustrations over failure to ensure local...