Daily prices, analysis and news for the Belgian gas markets and Zeebrugge hub

The daily insights provide readers with benchmark gas price assessments and indices, as well as analysis and news for the Belgian spot gas markets. The information is published in our European Spot Gas Markets report, which provides the most comprehensive round-up of Europe’s gas markets. The daily report not only informs readers of market developments across the Belgian markets, but also provides a complete picture on 12 established and emerging European gas markets including the British NBP, Dutch TTF as well as the German NCG.

The ICIS gas markets coverage for the Belgian ZTP hub provides you with: 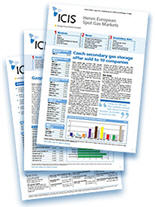 A swathe of dramatic changes to infrastructure and supply in Europe’s key markets have put Belgium at the epicentre of shifting flow patterns in… Wed, 31 May 2017

Easing gas demand fundamentals in France could pressure contracts at the PEG Nord gas hub next week, bringing prices back in line with the Belgian… Fri, 20 Jan 2017

High demand for Belgian gas, both domestically and for export to Britain and France, caused a spike of the Belgian ZTP Day-ahead contract over its… Thu, 01 Dec 2016

Belgium H-gas exports to the Netherlands likely to continue

Belgian high-calorific natural gas (H-gas) exports to the Netherlands are beginning to ramp up as the ZTP Day-ahead contract has established its… Mon, 09 May 2016

How will you benefit?

Traders embed our independent pricing information in their contracts & deals.

Procurement managers can access the latest prices to strengthen their positions in price negotiations.

Senior-level executives & managing directors can track important price developments and the latest events in key regions they are interested in.

Heren indices and price assessments from ICIS have been trusted by industry players for over 20 years, giving you the insights you need to make well-timed decisions in key gas markets.

Discover more
We use cookies to improve the performance of our site, to analyse the traffic to our site, and to personalise your experience of the site. You can control cookies through your browser settings. Please find more information on the cookies used on our site here