US-China trade war and the impact on the petrochemicals market

ICIS is tracking the impact on global petrochemical markets of the broadening trade dispute between the US and China.

01 September, 2018
SHARE THIS STORY
New tariffs came into force on 23 August on products imported into markets in both countries. The cost burden is shifting direct US-China trade onto other regional markets, displacing current product flows and potentially threatening the profitability of regional players in northeast and southeast Asia.

Players globally are nervous globally about the impact in big markets like PE (polyethylene) and for products where the US is building considerable, low-cost, export potential. The knock-on effect from the new tariffs on many other goods and the industries that require them has yet to be effectively determined.

ICIS reporters and analysts in Asia, the US, Europe and Latin America are in constant touch with the market players most directly affected by the widening trade dispute.

ICIS has unlocked the following news stories which give you access to an extensive coverage of the latest US-China trade war disputes, analysis and comment articles published by ICIS. It will continue to follow this developing story.

The US Trade Representative office on 8 August said US Customs officials will begin collecting duties on 23 August.  The finalised list contains 279 from the June list of 284. An updated list will be published in the Federal Register.

The US will hold hearings on 20-23 August.  On 1 August the Trump administration proposed to increase the tariff from 10% to 25%.

Nitrogen fertilizers and surfactants are included as well as caustic sodaand titanium dioxide(TiO2).

On 15 June China said it would impose a 25% tariff on $50bn of US imports in retaliation for US President Donald Trump’s administration moving forward with US tariffs.

The new list includes, for the first time, most grades of linear low density polyethylene (LLDPE) plus all high density PE (HDPE). Ethyl vinyl acetate (EVA) has been included as well as polypropylene (PP). Low density PE (LDPE) has been removed from an earlier list.

US to impose tariffs on $200bn worth of Chinese imports, may add more
18 September 2018

INSIGHT: US chemical exports to take bigger hit in US-China 2nd round of tariffs
23 August 2018

Insight: US chemical exports to take bigger hit in US-China 2nd round of tariffs
23 August 2018 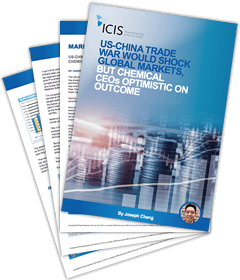 The US-China trade dispute is foremost on the minds of chemical industry CEOs and analysts alike with the potential for major tariffs, companies must be prepared to adjust their supply chains and change their long term investment plans.

Buy/sell with the right pricing data to make better-informed decisions and settle contracts with confidence.

Want to ensure you gain the latest market-moving news on the US-China trade war?

Our 24/7 news service keeps you informed of market developments, industry players, activities and production changes as they happen, so you can respond quickly to events, to minimise risk and seize new opportunities for your business

06 MAY 2020 10:17 Read
We use cookies to improve the performance of our site, to analyse the traffic to our site, and to personalise your experience of the site. You can control cookies through your browser settings. Please find more information on the cookies used on our site here