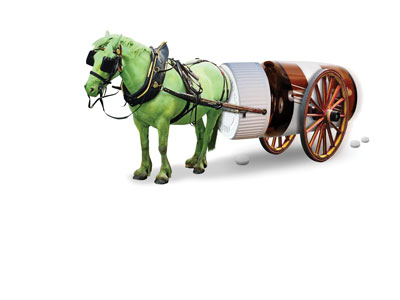 NOT LONG ago, peptic and duodenal ulcers meant costly surgery and hospitalization, but today they are treated with drugs such as Zantac 75, Pepcid AC, Prevacid and Nexium. A high cholesterol level once increased the likelihood of cardiovascular disease, but now Lipitor and Zocor can be used to lower cholesterol levels, preventing heart attacks and strokes.

What do these six drugs have in common, aside from improving the quality and length of life? Chlorine is used in their manufacture. They are not isolated examples. Chlorine chemistry is essential to the vast majority of top-selling pharmaceuticals. For consumers in the US and Canada, the net economic benefit of chlorine’s role is estimated to be in the order of $450bn/year (€306bn/year).

How can we make such bold claims?

The sale of prescription drugs in all settings amounts to roughly $400bn in the US and Canada. The cost of other components of the health care system far exceeds the cost of pharmaceuticals, but their use plays a critical role in reducing total health care costs. For example, the outpatient use of antibiotics to control bacterial infections is far less costly than repeated visits to physicians or extended hospitalization.

COST SAVINGS
More generally, each dollar spent on pharmaceuticals reduces the overall cost of health care by $2.00-4.00, according to estimates by F.R. Lichtenberg of US-based Columbia University. We obtained information on the sales of the top 200 prescription pharmaceuticals in all settings in the US in 2004 from NDCHealth, a US-based pharmaceutical information company.

We linked the brand names to compound names, chemical compositions and the compound’s primary medical uses or indications. This information was sufficient to assign each compound to the appropriate therapeutic class and identify those with chlorine in their structure, but not to determine the extent to which chlorine chemistry may have been involved in the compound’s manufacture.

For small-molecule pharmaceuticals and biologics, information on the manufacturing processes proposed in the compound’s patent was available for nearly all materials. Small molecules are in drugs that have relatively low molecular weights and are synthesized using the techniques common in organic chemistry. Biologics are protein-based drugs such as Epogen (used for anemia) that are generally produced using recombinant DNA techniques.

These compounds were then sorted into one of three groups based on the specific role of chlorine chemistry:

The results of this analysis are summarized below.

CHANGING PICTURE
For comparison, we matched the current list of top-selling drugs with a similar list from 1990. Not one of the top 20 selling pharmaceuticals in 1990 was among the top 20 sold in 2004 – in fact, only three of them from 1990 were among the top 200 list of 2004. With so many patent-protected and generic pharmaceuticals available to consumers, the list of most heavily prescribed drugs changes remarkably fast within a short time.

If consumers were deprived of access to chlorine-based pharmaceuticals, how much more would it cost to achieve the same level of health care outcomes?

To answer this question, we developed an economic model of health care alternatives. For consumers of pharmaceutical products, the model estimates the economic benefits of chlorine chemistry as the difference in the total cost that would be incurred in the absence of chlorine-based products compared with their current cost. This cost includes not only the cost of the pharmaceuticals themselves but the cost of other components of the health care system that would be used as substitutes.

These alternatives include more frequent visits to physician’s offices, clinics, and hospital emergency rooms, increased lengths of hospital stays or use of nursing home facilities, increased use of home health care providers, and increased reliance on homeopathic remedies.

We tested many different scenarios and compared them to the base case. The scenarios included lowering pharmaceutical prices, altering manufacturing processes to eliminate chlorine-containing compounds, and replacing chlorine-free substitutes for hydrochloride salts in the dose form.

For US and Canadian consumers, we estimated the net economic benefit of chlorine chemistry in pharmaceuticals to be of the order of $450bn/year, a mid-range estimate lying between a lower bound of $230bn, and an upper bound of $1.2 trillion. At this level, the benefits amount to about 1.5 times the cost of the affected pharmaceuticals.

The benefits are extremely large in relation to the amount of chlorine that is consumed to produce them. After all, only 1.5% of total chlorine production in North America is used for this purpose. It really is a pharmaceutical industry workhorse.

Ronald Whitfield is a visiting professor at Northeastern University, in the US, and president of Whitfield & Associates, a consulting firm. Email: ronaldmwhitfield@gmail.com

CHLORINE IN THE MANUFACTURE OF LEADING PHARMACEUTICALS (2004)

Save 30% on a subscription to ICIS Chemical Business