Succinic acid has been in the market for decades, but new applications have begun being developed and tested only recently, with the first of several commercial bio-based succinic acid plants expected to come on stream this year.

Reverdia – the Netherlands-based joint venture between Dutch chemical company DSM and France-based starch derivatives producer Roquette – is expected to start its first commercial bio-succinic acid plant in Cassano Spinola, Italy, in October 2012. The plant will have a capacity of 10,000 tonnes/year.

US bio-succinic acid player Myriant expects to start up its 30m lb/year (13,600 tonne/year) facility in Lake Providence, Louisiana, in the first quarter of 2013 and plans to expand it to 170m lb/year by early 2014.

Another US producer, BioAmber, with its joint venture partner, Japan-based Mitsui, also expects to start its first large-scale commercial facility with an initial capacity of 17,000 tonnes/year (expandable to 34,000 tonnes/year) in Sarnia, Ontario, Canada, by 2013. Myriant and BioAmber both filed for initial public offerings last year.

Also in 2013, a bio-succinic acid facility with a fermentation capacity of 25,000 tonnes/year, owned by German chemical firm BASF and Dutch bio-based chemicals producer Purac. is due to start up in Barcelona, Spain.

By 2015, new bio-succinic acid plants expected to come on stream will have capacity in excess of 200,000 tonnes/year (see table).

“More and more, there is growing interest for succinic acid-based products from companies worldwide as reliability of bio-succinic acid supply is becoming apparent based on the incoming new capacities,” says Will van den Tweel, general manager of Reverdia.

“We are expecting the market will become bigger, especially due to the growing need for sustainable solutions, products with an improved environmental footprint, biodegradable and bio-based products. The availability of bio-succinic acid will enable this growth. Longer term, it will be competitive to petroleum-based succinic acid and adipic acid,” he adds.

Current annual production volume for petroleum-based and bio-based succinic acid, including succinic acid derivatives worldwide, is put at 30,00040,000 tonnes by several industry players. Another producer put it at about 20,000 tonnes/year. 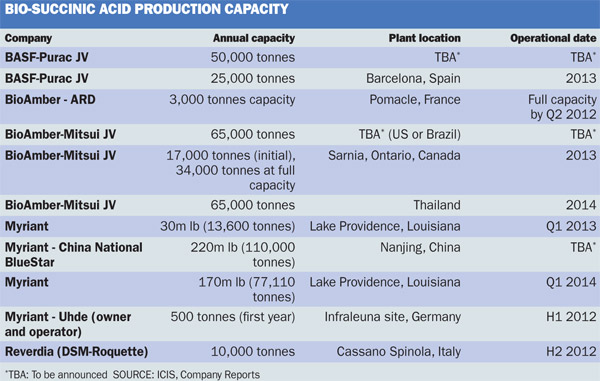 According to Myriant in its S-1 form filed last year with the US Securities and Exchange Commission, existing succinic acid is being used as an input in the production of pigments, solvents, detergents, metal plating and polybutylene succinate polymers, which can be used to replace conventional plastics in applications such as flexible packaging, agricultural films and compostable bags.

Polybutylene succinate can also be combined with polymers such as polypropylene (PP), polystyrene (PS) and polycarbonate (PC) as well as bioplastics such as polylactic acid, polyhydroxyalkanoate, and poly-3-hydroxy butyrateco-valerate. In composites, PBS can be combined with fibers or fillers for applications such as automotive interiors, nonwovens, construction materials and consumer goods.

Another high-volume succinic acid derivative producers aim to capitalize on is BDO.

Major uses of BDO are in the production of tetrahydrofuran (THF), an intermediate in the production of elastic fibers, and engineering thermoplastic polybutylene terephthalate (PBT). Global capacity of BDO is 4.5bn lb/year, half of it used in THF production, according to Myriant’s S-1 filing. The largest global BDO producers include BASF, Taiwan’s Dairen Chemical, Netherlands-based LyondellBasell, US firms ISP (now owned by Ashland) and INVISTA, and China National BlueStar.

“We estimate 1.7bn lb of succinic acid or its ester is produced captively in BDO processes worldwide,” says Myriant vice-president Alif Saleh. “We further believe that a significant part of this is produced in the maleic anhydride to butanediol process which is owned and licensed by UK engineering firm Davy Process Technologies.”

Myriant partnered with Davy since last year for the testing and approval of its bio-succinic acid as a drop-in feedstock replacement for MA within the Davy Process. Myriant said the Davy licensed process had been used in 50% of all new BDO capacity built since 1992. The Davy BDO process converts MA into dimethyl succinate and then into BDO.

Davy has licensed 11 BDO plants with a joint capacity of over 610,000 tonnes/year. Aside from the Davy process, which occupies 27% of global BDO capacity, three other main BDO processes are the Reppe process (41%), the Propylene Oxide process (21%) and the Mitsubishi process (7%). About two-thirds of global BDO is captively used by BDO producers, according to the Myriant S-1 report.

BioAmber is also working on bio-succinic-to-BDO. In 2010, it licensed US-based DuPont’s hydrogenation catalyst technology to make bio-BDO and bio-THF from bio-succinic acid.

“We have been working with third parties to validate the technology and expect our bio-BDO to be commercially available in 2014,” BioAmber said in its S-1. “We believe the market for BDO and THF exceeds $4bn.”

US renewable chemical firm Novomer wants to capitalize on growing interest in bio-succinic acid through its homogenous catalyst system.

Novomer uses the catalyst system to combine carbon monoxide (CO) with ethylene oxide (EO) to create an intermediate called propiolactone, which can then be converted into various chemical intermediates such as acrylic acid, acrylate esters, butanediol and succinic acid.

The capital expenditure for this process is significantly lower than for bio-based or petrochemical-based processes, says Mike Slowik, senior manager, strategic planning and analysis at Novomer.

“Novomer’s process will be at least 30% lower-cost than competing processes because of abundant and cheap ethane-derivatives,” he says. “We are in the process of designing a pilot unit to verify the economics of these chemicals and of our catalyst system.”

Novomer is also seeking a development partner with process engineering capabilities and access to EO that could, ultimately, be the manufacturer of the chemical intermediates.

Dutch chemical firm DSM is one of Novomer’s main investors. Although DSM also has its own bio-succinic acid project, Slowik says DSM is not collaborating on the development of CO-to-succinic acid.

“Our relationship with DSM is limited to our carbon dioxide-based polyols for coating applications,” he says.