NEW YORK (ICIS)–A mega merger in global chemical distribution between #1 player Germany-based Brenntag and #2 US-based Univar Solutions appears viable from an antitrust standpoint in a highly fragmented market, although North America could be an area of scrutiny and trigger divestitures.

Late Friday, 25 November, Univar confirmed that it received a preliminary indication of interest from Brenntag on a potential deal following an earlier Bloomberg article the same day reporting that Brenntag was exploring a takeover of Univar.

The UBS analyst added that only around 10% of total chemical sales go through distributors, and within this slice of the pie, a combined Brenntag/Univar would represent only 8% of global chemical distribution sales.

NORTH AMERICA CONCENTRATION
However, distribution sales would be much higher in certain geographies, particularly in North America. Brenntag in its latest investor presentation in October estimated that in North America, itself and Univar comprised about 23% of the market based on 2019 sales, citing data from ICIS, a BCG study in September 2020 and its own analysis.

In the EMEA (Europe, Middle East and Africa) category, combined market share would be 9.5%, according to Brenntag. 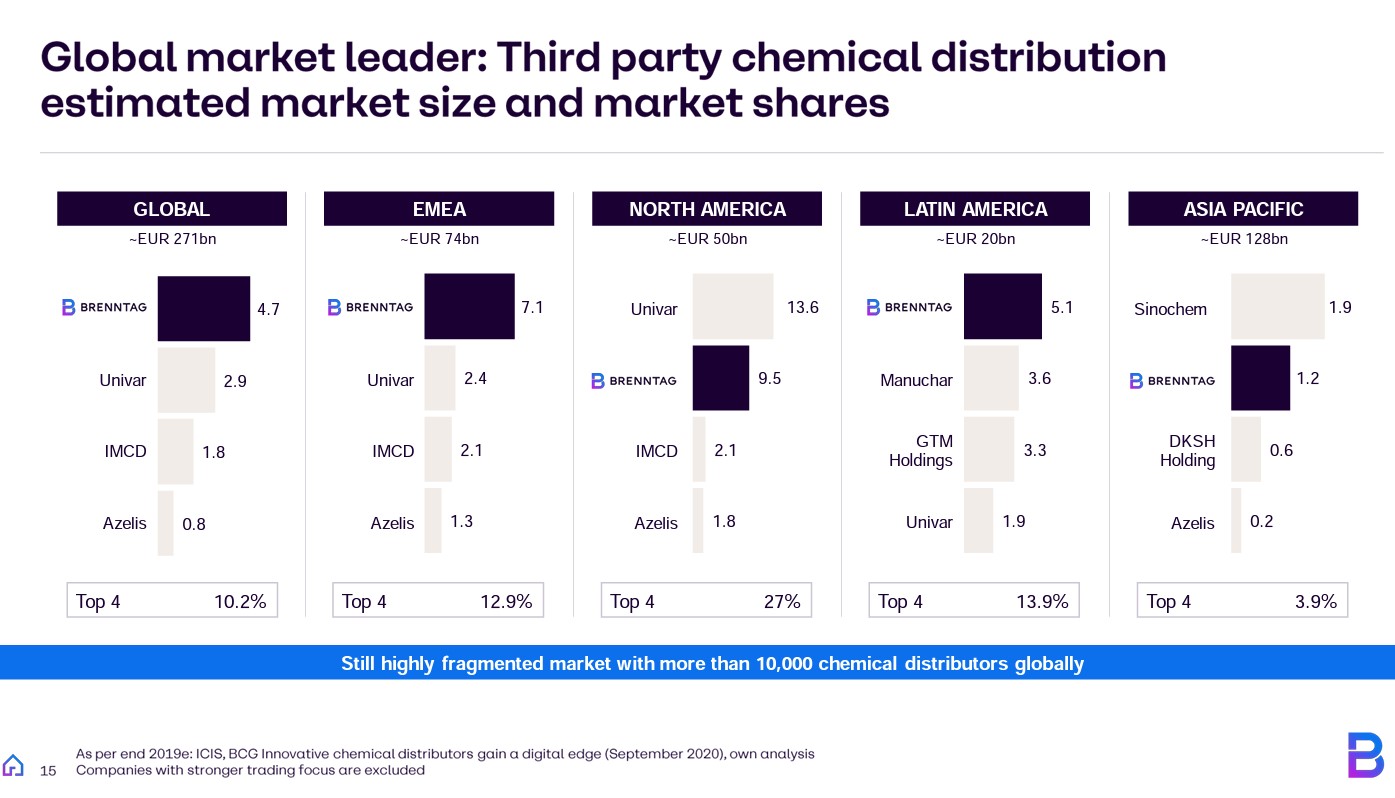 These levels of concentration “could be manageable from an antitrust perspective”, according to UBS’ Spector, pointing to the industrial gases market where companies have regional market shares of around 30%.

Of course, this must be caveated by two factors – not all distributors in North America participated in the annual ICIS survey, and for those that did, not all broke out sales by geography, so sales are likely understated. Also note that Brenntag’s sales reported in euros were converted to US dollars based on 31 December 2021 exchange rates.

Based on 2021 figures, a combined Brenntag/Univar would have total sales of around $26bn, although this figure should be closer to $30bn based on 2022 sales thus far.

PRICE CONSIDERATIONS
So what could Brenntag pay for Univar in a highly strategic transaction?

Fermium Research analyst Frank Mitsch points to using a 10x EBITDA (earnings before interest, tax, depreciation and amortisation) multiple as a good starting point in valuing such a deal.

“For comparison purposes, Univar announced its acquisition of Nexeo back in September 2018 for $2bn, which represented 9.4x the consensus 2018 estimate, while Avient sold its plastics distribution business for $950m earlier this year which amounted to a 9.7x multiple,” reasoned Mitsch in a research note.

Applying a 10x multiple to the 2023 consensus EBITDA estimate of $927m for Univar would yield a $42/share takeout price, he noted, also choosing to forego applying 2022 estimates because of the outsized impact of inflation on results.

The Fermium analyst pointed to Univar’s improving prospects after integrating the Nexeo acquisition and completing a challenging SAP enterprise software implementation, along with its limited exposure to more troubled areas outside the Americas with less than 20% of sales in EMEA and Asia, as attractive features from an investment perspective.

UBS European chemicals analyst Rory McKenzie who covers Brenntag models a takeout price of about $40/share for Univar and estimates a synergy target of 20% of North America SG&A (selling, general and administrative) expenses, along with divestments representing 10% of North America gross profit.

FRAGMENTED AND UNDER-PENETRATED
McKenzie calls the chemical distribution sector a fragmented and under-penetrated industry – and thus one with potential for growth above that of the chemical sector in general. 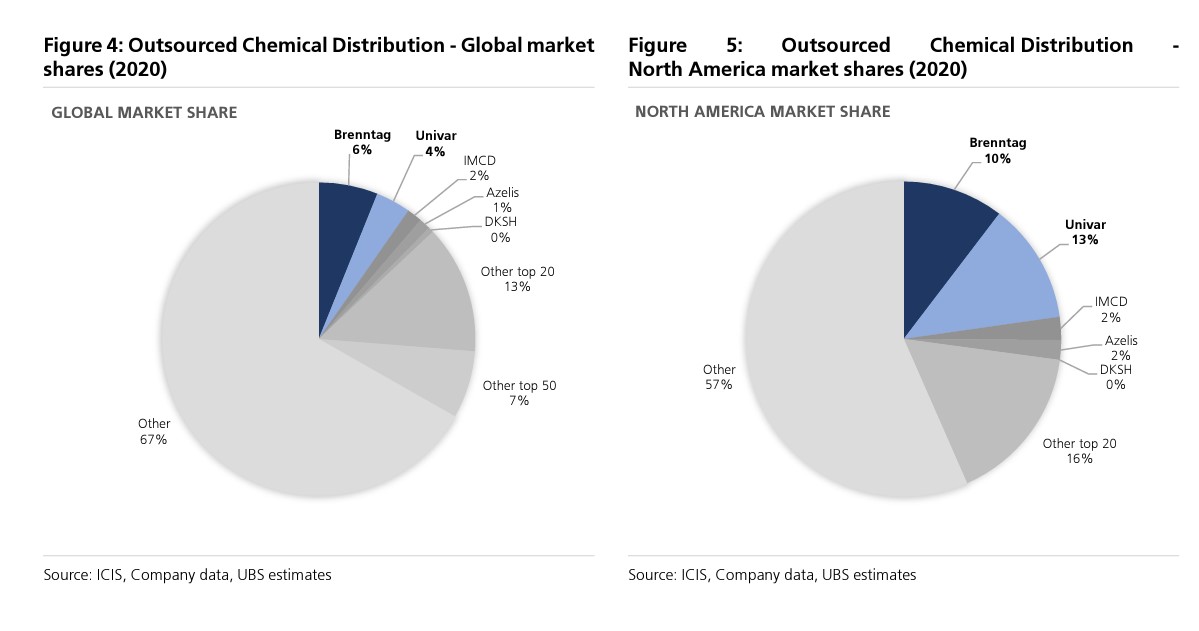 As mentioned earlier, UBS estimates that a combined Brenntag/Univar would represent just about 10% of total global chemical producer sales.

“We note that industry studies suggest that 20-40% of chemical customers spend under €100,000/year (around €2,000/week – a level in line with Brenntag’s average customer spend), suggesting that the outsourced distribution channel appears under-penetrated,” he added.