Last month ICIS surveyed its readers on the medium-term impacts and concerns arising from the US shale gas boom. The results show supply chain issues across domestic and export businesses are uppermost in senior executives’ minds

North America is once again a prime target for chemical investment. Companies continue to find the region attractive as a result of the shale gas phenomenon, which has reduced energy and feedstock costs and is prompting a resurgence of US manufacturing and industrial demand.

Readers responded strongly to the latest ICIS online survey, which probed senior managers’ views on developments and concerns as the shale gas effect moves downstream. The survey, carried out in April and May in association with international management consultancy Accenture, drew comments from over 1,200 participants, a quarter from senior, board-level positions.

Over half of all participants revealed their companies are already increasing or planning to increase their levels of investment in North America over the next two years. Indeed, the US and Canada topped the list of regions in which companies are investing most, just outranking China and clearly more popular than Western Europe and the Middle East and Africa.

The survey revealed some interesting points that indicate more business planning is needed around these investments, including:

Distribution costs were ranked as the biggest issue associated with investment in North America, followed by regulations. These ranked ahead of rising construction labour costs.

There was widespread agreement that the decade of the 2020s would be characterised by capacity consolidation and closure, a “Big Crunch” period following the “Big Bang” investment period (as outlined in the book Big Bang Disruption by Larry Downes and Paul Nunes). 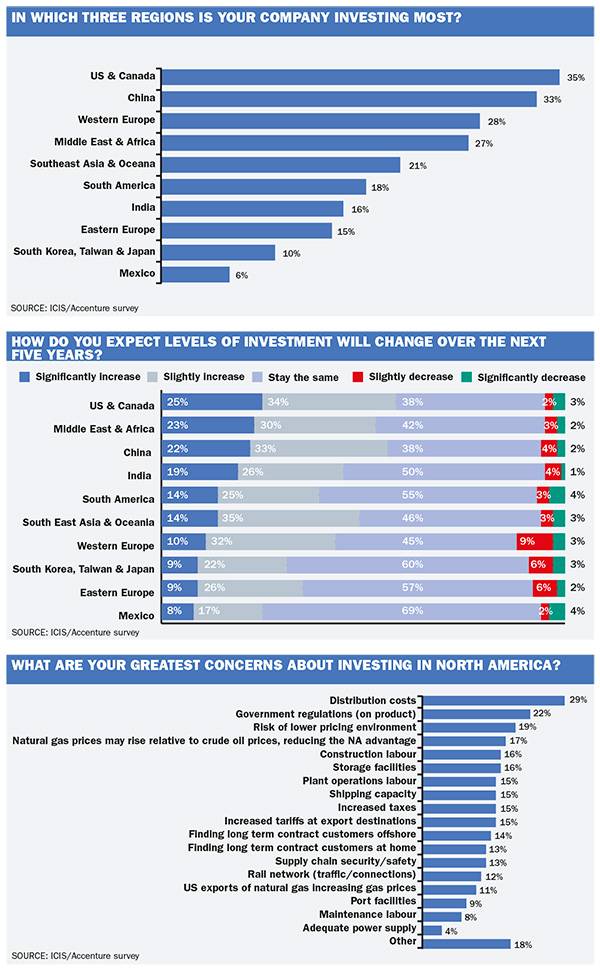 NORTH AMERICA DOMESTIC MARKET
About 77% of respondents chose North America as a destination market for the output of their new capacity investments. This is followed by South America (40%) and Europe (33%). Only 28% chose China as a destination. This data shows a disparity from actual market sizes and growth rates. The North American market for ethylene derivatives, for example, is expected to be oversupplied by 8-20m tonnes, depending on which announcements come to fruition, by 2023.

Domestic North American demand is expected to grow only by about 2.6%/year (based on ICIS Consulting data), and will thus clearly be unable to absorb all the new capacity, unless reindustrialisation trends in downstream manufacturing occur faster than expected.

The Latin American ethylene derivative deficit is expected to grow by only 3.6m tonnes between 2013 and 2023. China, however, still represents the largest export destination of chemicals, despite a recent slowdown in growth.

SUPPLY CHAIN CONCERNS
There are concerns in many executives’ minds, mostly centred on supply chain capabilities and the impacts of extensive new capacities hitting the market. Close to 60% of respondents see supply chain security becoming more important to their businesses in North America, with various people commenting on the need to have a well-structured, stable/steady operation, with better efficiency.

Companies are beginning to realise that they need to address their organisational structure to make the most of the opportunities offered by shale gas-driven downstream chemicals investment. While most believe that traders, distributors and resellers will take a larger role, they also recognise that they will need to make changes in their organisations to implement their export strategy. About 30% said they would need to increase overseas offices for most selling. A quarter said they would be looking to build an export sales organisation in the US.

Furthermore, most companies will be looking to establish long- and medium-term contract export business, with 45% indicating they are planning for contracts of over three years in duration. With this in mind, they also recognise the need for significantly increasing customer application development, especially in North America and China, indicating a realisation that value-added selling will be important in gaining large volume, base customers.

In terms of costs and available infrastructure, two-thirds of those answering the questionnaire said they expect inland freight rates and distribution costs to rise over the next five years, with a quarter seeing prices stable. Comments included the fact that the market will have to wait for logistics resources to catch up, that the higher demand will enter an already constrained market, and that although the higher volumes will dilute costs, it will offset the new equipment to be paid for.

Equally, on export freight rates from the US, both for bulk container and liquid parcel tankers, nearly two-thirds of respondents see rates rising either significantly (15% and 18% of replies, respectively) or slightly (46% and 45% of replies) over the next five years.

However, logistics experts have indicated that the Panama Canal expansion, due by the time most capacity expansions take place, will have the potential to improve shipping economics by 40-50% per unit, but much will depend on Gulf Coast port expansions and inland rail connections to achieve the full benefit. 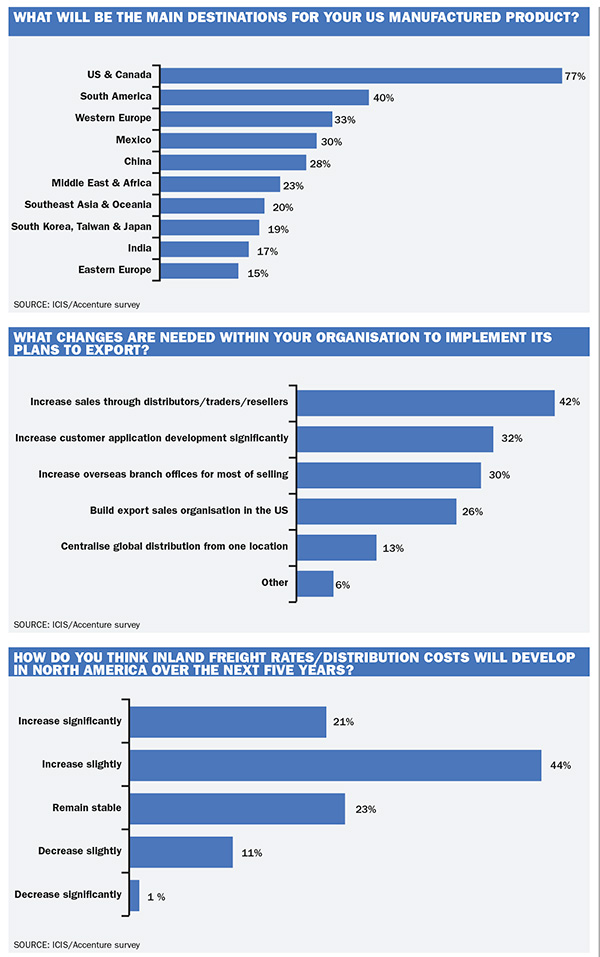 INCREASED FLEXIBILITY
In response, most companies in the survey will be making investments to improve their supply chain and increase capabilities – in rail movements, storage, third-party handling, and packaging – and many will be looking at increasing the flexibility of their supply chains (which they nearly unanimously ranked as being important), especially in terms of distribution routes.

Specific comments were along the lines of: we need to widen our customer base and obtain better freight rates as competition increases; there will be market volatility in our customers’ territories; and it will be necessary to have a good supply chain system and reduce costs.

FUTURE IMPACTS
Looking ahead, the shale gas developments are expected to lead to several structural shifts in the market. First, global overcapacity for products made from shale gas-derived ethane is really expected to kick in two to five years from now, as the new polymer and other derivatives capacity comes online. Only 39% of respondents thought there would be no over-capacity over the next 10-year period.

The early 2020s will see a number of impacts working themselves out. Capacity closures in high-cost regions were expected by over half of all respondents, while consolidation and asset ownership realignment were expected by 41%. A lower-margin environment, lower prices and continued investment in low-cost areas were also strongly supported.

This is consistent with big crunches seen in other industries after substantial new innovations were introduced. It will likely be exhibited in the chemical industry by enough capacity being added in North America and further hydrocarbon resources being developed around the world that would bring about the closure of higher-cost capacity and flatten global cost curves on key products, such as ethylene. Producers must therefore already consider these implications and tighten total costs from plant to customer in their current business planning and investments, to ensure the highest returns over the long term.

WHO RESPONDED TO THE SURVEY?
The online ICIS survey, in association with Accenture, was carried out over three weeks from mid-April to early May. One quarter of respondents were vice-president level and above, and a further 22% were general managers. In terms of sectors covered, half of those taking part worked in petrochemicals and polymers, 24% in specialty chemicals and 21% in supply chain service providers.

By company size, half of participants worked in companies with a turnover of less than $500m, while 15% were in $10bn-plus turnover firms. Regions in which companies primarily do business were Western Europe (40%), US and Canada (37%) and China (28%), with the Middle East and Africa fourth at 23%.

BLOG: China HDPE: Final review of 2021 and a further outlook for this year