LONDON (ICIS)–The sharp drop in crude oil values towards the end of 2014 and the subsequent knock-on effect this has had on the global petrochemical market is muddying any pricing forecasts for the European benzene market next year.

Falling global prices, sluggish derivative demand and a bearish macroeconomic outlook saw the European benzene market drop below $700/tonne by mid-December 2014, the lowest point spot prices have been since May 2009.

The steep decline in European spot pricing comes at the tail-end of a bullish year overall (see graph), with the market hitting record highs in January 2014 amid firm US numbers, healthy demand and supply constraints.

Spot levels were consistently within a range of $1,200-1,500/tonne CIF ARA for the majority of the year, and only fell below $1,000/tonne in mid-November, the first time the European spot price moved into a three-digit figure since late 2011.

However, several players pointed out that with naphtha pricing also moving sharply lower, this was keeping the spread between the two products manageable from a production standpoint (see graph).

While recent years have seen the naphtha/benzene spread hover around the $450-500/tonne mark, the historical margin between the two has always been closer to $250/tonne. Since 2012, the benzene margin over naphtha has been consistently strong, at some point reaching $600/tonne, and many in the aromatics market had come to believe that this was how the future would look. 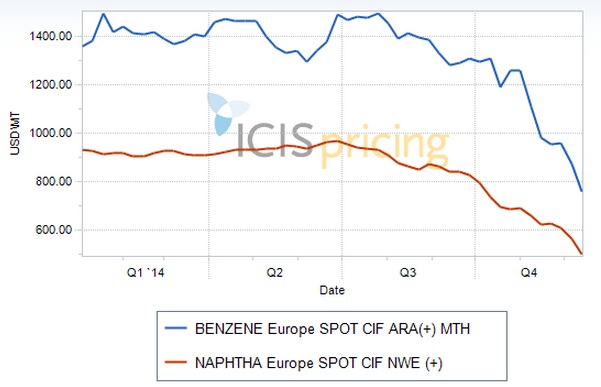 Looking ahead to 2015, there is an expectation that benzene could see some ongoing price volatility due to supply issues, although with crude oil and naphtha prices significantly reduced, this was likely to be within a lower bandwidth than in recent years.

The availability constraints facing the global benzene market remain intact, and once crude oil and energy prices find a steady level, spot numbers would start to react to supply/demand pressures.

“I think we will see sharp and sudden spikes in the market next year,” said one major European consumer. “Supply-wise, not a lot has changed if you look at the wider picture.”

Several players agreed that market fundamentals in Europe for benzene remain the same, with some year-end inventory control assisting the downward movement in Q4 2014 as opposed to the collapse of downstream demand seen in late 2008. A handful of styrene shutdowns towards the end of the year have also helped free up benzene supply in Europe.

However, the trend seen in the second half of 2014, with more benzene coming out of Asia, would continue next year, with imports arriving into both the Mediterranean and ARA regions.

Yet there are still some question marks surrounding the drop in oil pricing in Q4, and whether the market had reached a floor around the $60/bbl level. There are expectations among some pundits that crude prices could fall even further, reaching the post-war average of $45/bbl. 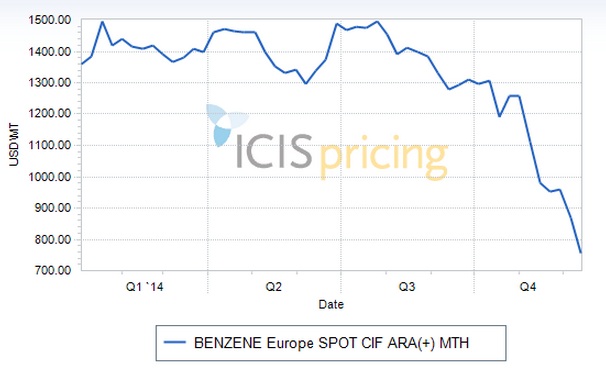 Looking further ahead, a steady oil market at a lower level could potentially support demand recovery, with many countries seeing a boost in GDP, although some benzene players were unsure whether a lower oil price would galvanise purchasing power enough to see a noticeable upturn in derivative production and demand in key downstream industries.

One aromatics trader was succinct about the matter: “Just because it costs me less to fill up my tank, this won’t mean I go out and buy a new car.”

While some sources expect to see steady albeit weak fundamentals in the downstream MDI and phenol markets next year, there remain many questions about the key styrenics chain going forward, which will impose a ceiling on any benzene price recovery in 2015.