LONDON (ICIS)–A sharp fall in prices for the primary olefins and aromatics and the major polyolefins in northeast Asia helped drive the ICIS global petrochemical index down by 8.7% month on month in August, data showed on Wednesday.

This was the steepest fall in the index since the turn of the year, with the global IPEX for the month down 31% year on year.

Prices for all these products, on average, were lower in August than in July in the northeast Asia region.

Ethylene prices dropped 23% month on month and butadiene prices 22%. Benzene prices were down 17% and styrene prices 16% on the same basis. The drop in polymers prices was less severe as was the fall for methanol.

The Asia IPEX for August was down 13% month on month having fallen 7% in July.

The northwest Europe index was down 3% while the IPEX for the US was down 6%.

The monthly ethylene contract fell to the lowest level since December 2008 on a combination of aggressive selling by some and continued long supply, ICIS reported.

US August ethylene spot prices fell hard on a combination of aggressive selling by some and continued long supply. Feedstock costs were low based on falling global oil and energy costs and oversupply in the US of propane and butane.

The August IPEX will be revised when the July contract price for US paraxylene is agreed by market players.

The July IPEX figure has been revised to 252.67 from 253.52 based on contract settlements for US ethylene, styrene, PX and PVC, Europe PX and Asia styrene. 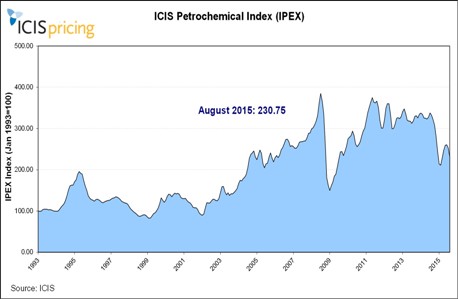 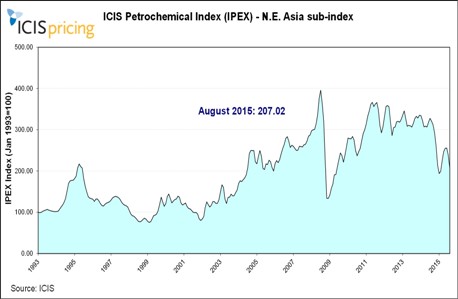 *Published at the beginning of each month, the IPEX provides an independent indicator of average change in world petrochemical prices.

Dating back to January 1993, historical ICIS prices for these products in the US, western Europe and northeast Asian markets have been weighted by regional nameplate capacity to generate the monthly index value.