LONDON (ICIS)–It had to happen eventually. Since late 2021, chemicals producers have been passing on substantial price increases to keep up with energy, raw material, and inflation costs, while multiple CEOs warned that, eventually, those cost increases would hit consumers.

Chemicals producers are very early in the chain to products being completed and then sold, but signs are emerging from multiple sectors that those price increases are starting to be felt, and impact on demand at a point where costs of living are surging and consumer caution is increasing.

A huge market sell-off that originated in the US and rippled through stock exchanges in Asia and Europe late last week was triggered by unexpectedly weak results from big-box retail chains in the country.

Walmart’s CEO Carl Douglas McMillon stated on an earnings call that the firm was seeing margin erosion from customers prioritising food purchases over bigger-ticket items and less pressing spending on electronics and other capital goods.

Another bleak note for the makers of capital goods and their suppliers was sounded by technology firm Cisco, which also reported a bearish outlook on the back of a logistics environment that has deteriorated further in the wake of the Russia-Ukraine war, and lockdowns in China.

FOOD COSTS
The darkening macroeconomic environment has resulted in a slight moderation of some commodity pricing, with the pace of crude price growth more muted despite some tightness in the chain, while remaining at high price levels relative to mid-2021.

Both WTI and Brent benchmarks remain over $110/bbl. 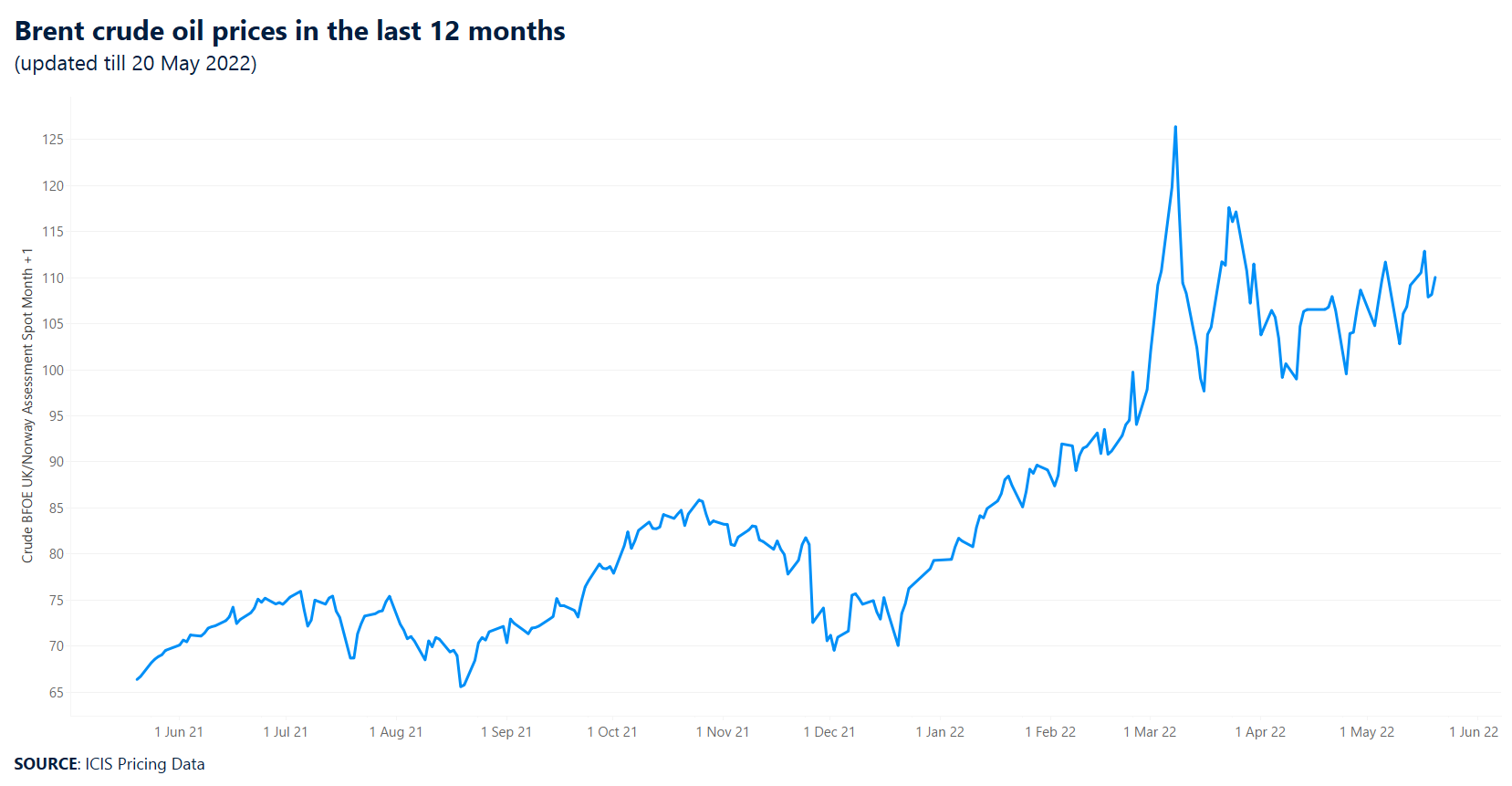 –
A slight reduction in price pressures for raw materials could stand to reduce costs for chemicals producers, but is less likely to buoy consumer spending as food pricing has continued to rise, as highlighted by IMF chief Kristalina Georgieva, speaking at a World Economic Forum (WEF) panel this week.

“We have commodity price shock in many countries, [and a] particular shock I want to bring your attention to is food prices … Because of that sense that maybe the economy’s getting into tougher waters,” she said.

“The oil price went down, but food price continues to go up, up up. Why? We can shrink the use of petrol when growth slows down, but we have to eat every day.”

European energy prices continue high as the continent tries to wean itself off Russian oil and gas imports in an extremely tight timeframe.

Even the UK, which is less directly dependent on Russian natural gas but is more exposed as a consequence to open market pricing, is looking at a potential hike in the annual energy price cap to £2,800 per household in October, following a 50% increase to £1,970 last month.

Jonathan Brearley, head of UK energy regulator Ofgem, described the current situation as a once-in-a-generation event, and warned that 12m people, close to a fifth of the whole country, could be pushed into fuel poverty by the hike.

In the face of those projections, it seems trivial to draw attention to the prospect of lower spending on electronics, cars, and home decoration.

However, the fact is that the higher costs chemicals firms have been pushing down the chain will push up the cost of those items at time when consumers are much less interested in buying them. 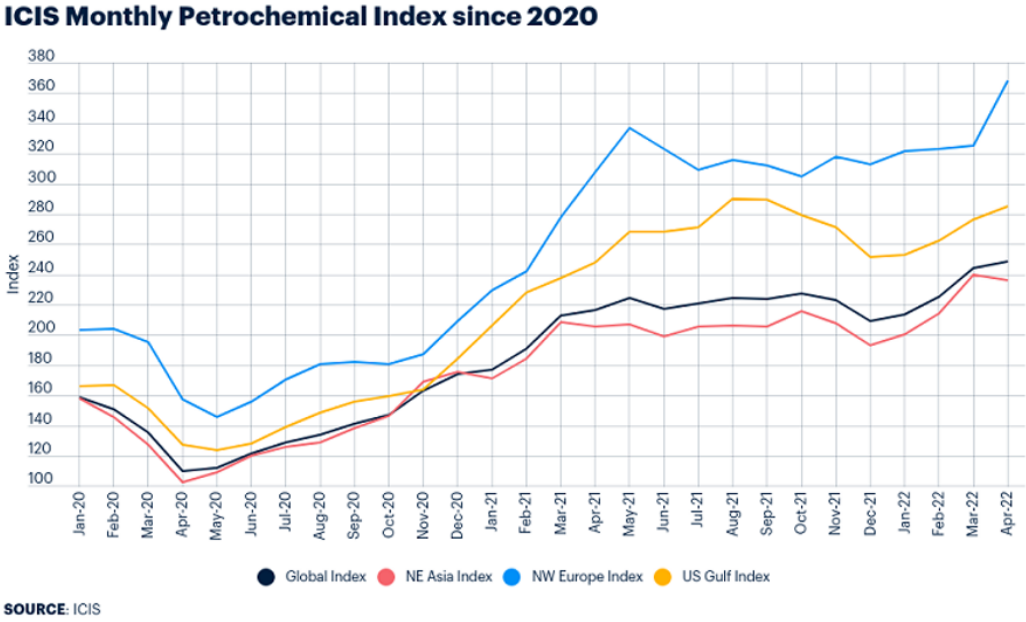 Even if the energy crisis were resolved tomorrow, the long tail of value chain cost hikes from upstream to downstream means that those higher prices would be likely to remain through much of the year.

As it is, chemical company executives will be eyeing a potential scenarios in the second half of the year where end user demand falls but production costs remain high.

The IMF cut its global GDP growth expectations practically in half last month, from 6.1% to 3.6%, while the European Commission slashed its forecast for the EU in 2022 to 2.7% from 4%, noting that the war is sustaining economic headwinds that had been expected to subside.

3.6% is a long way from zero growth or recession, but the IMF’s Georgieva did not rule out a slip into negative growth for some regions.

“What we may see is recession in some countries that … haven’t recovered from the previous crisis, highly dependent on energy imports from Russia or imports of food,” she said.

The EU, with its crippling dependency on Russian energy and intricately woven food supply lines, fits that description extremely well.

TWO-SPEED RECOVERY
From a chemicals sector perspective, the outlook could be even darker, as a substantial driver of what growth there is is coming from the service sector.

This is an inverse of the situation during the pandemic when consumers, unable to travel or socialise, poured cash into new capital goods and home improvement.

Now, after two years of being trapped at home, and facing the highest energy and inflation levels since the 1970s, consumers are prioritising what discretionary cash they do have for restaurants, concerts, and holidays.

“In the industrial sector where weaknesses are accumulating, we are seeing deteriorated prospects, falling foreign order books, weak demand due to high prices, and supply difficulties,” she noted.

Over the last few years, the watchwords for the chemicals sector have been diversity and resilience, with firms moving to diversify their end-market exposure and targeting less cyclic portfolio mixes.

SECTOR RESILIENCE
Food and healthcare sector demand is likely to remain strong irrespective of the current economic storm, and shortages that have dogged certain sectors over the last few years may keep demand for some consumer goods stronger than it would have been.

The semiconductor chip drought over the past two years has created pent-up demand for vehicles and consumer electronics that is likely to continue to filter through despite the current market climate.

This is borne out by a less pessimistic view on exports from Germany’s automotive sector. The most recent survey by think tank Ifo showed that export optimism had improved slightly among manufacturers, despite little expectation of any improvement in the immediate future.

This could speak to players adapting once more to the latest tumult for the global economy as much as any expectation that any of the current headwinds will subside any time soon.

As much as anything else that industrial producers have learned since 2020, an ability to come to terms with and adapt to previously unthinkable market conditions may be one of the most fundamental.

With a land war in Europe, food shortages, and energy conditions not seen since the fuel crisis of the 1970s, following straight on the heels of a global pandemic, company responsiveness may be an even greater competitive differentiator than forward planning.