LONDON (ICIS)–Global oil markets are closely monitoring elections in Libya, which stand could have a substantial impact on the region’s stability, and set the tone for the country’s crude production.

Libya is set to choose its first ever democratically-elected President on 24 December.

Political tensions are expected in the run-up to and potentially the aftermath of the polls, with supply disruptions possible. Libya is the third-biggest oil producer in Africa and holds the largest proven reserves, exporting light-sweet Es Sider and Sharara grades. Their large yields of gasoline and middle distillates make product from the country highly attractive to Europe and Asian refiners.

The elections will run in the absence of a constitution, amid turmoil already sparked when Seif al-Islam Gaddafi, the son of former dictator Muammar Gaddafi, and Khalifa Haftar, leader of the Libyan National Army (LNA), announced plans run for Presidency.

Both have been rejected by the High National Election Commission, which could further spur volatility. Internal clashes between the National Oil Ministry and the chief of the National Oil Corporation could put further pressure on Libya’s oil industry.

IMPACT ON GLOBAL OIL PRICES
When Libya’s oil sector removed around 1m bbl/day of crude from the global market in 2011 and in 2016 during their civil way, the disruptions affected the Brent crude price as the outages reinforced a tighter market by disrupting global supply and decreased surplus crude oil production capacity. This mostly stemmed from force majeures being implemented after hits on the country’s oil infrastructure.

Talking to ICIS Senior Analyst Ajay Parmar, a significant disruption of around 1m bbl/day must occur for the market to feel a spike in prices.

However, market balance between supply and demand is tight at present, which could be exacerbated further if Libya cuts its oil output.

“We also have to consider Nigeria and Angola, which also have their production problems, including maintenance and old infrastructure”, Parmar said.

Nigeria is producing at least 20% less than their OPEC+ quota every month and a slight reduction on their part could heighten the effects of Africa’s overall oil production.

“I do see potential for the upcoming elections to lead to some negative impacts on Libyan oil supply, but probably not as substantial as the disruptions seen at certain periods over the last 10 years,” Richard Bronze analyst from Energy Aspects said. 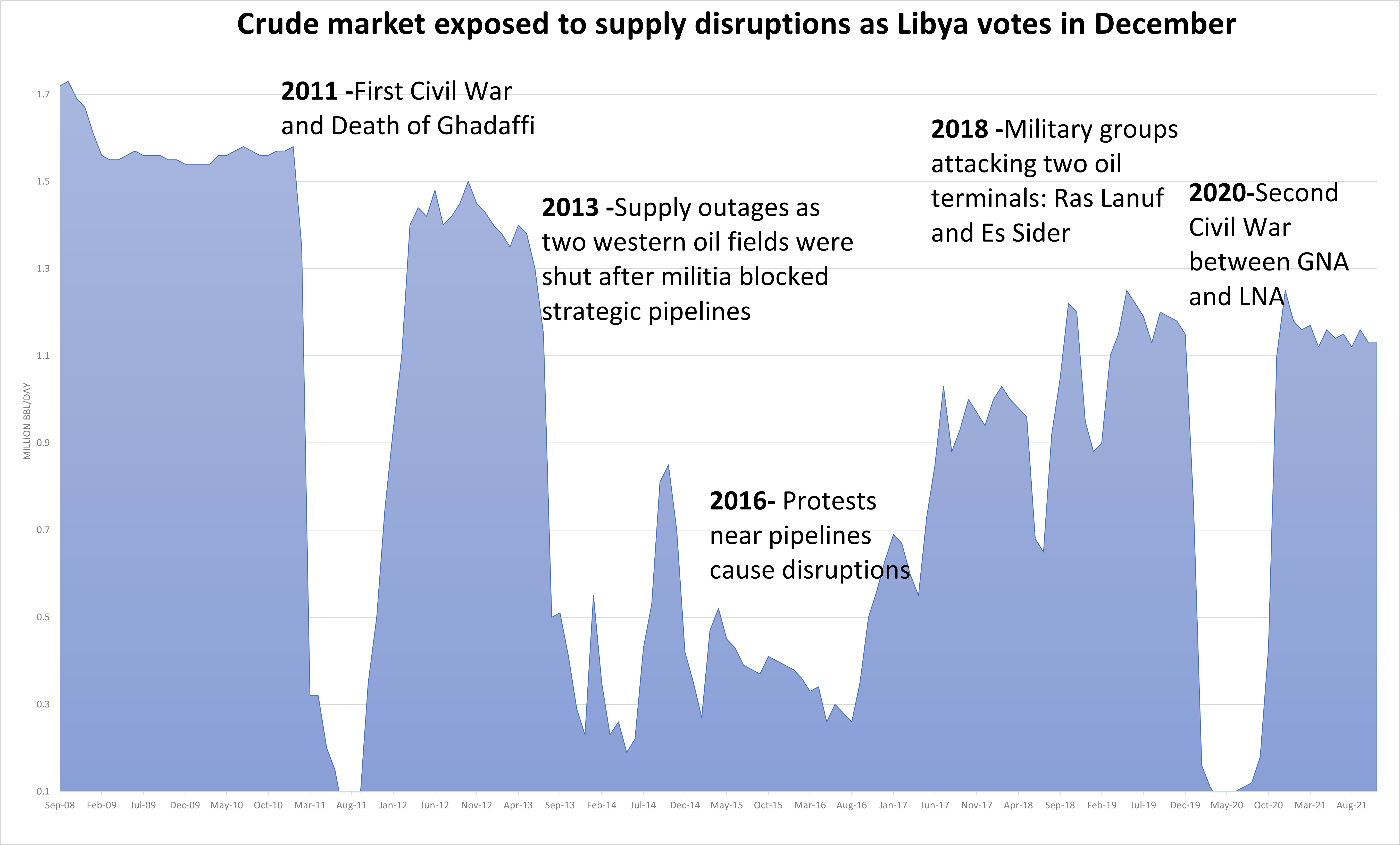 DECADES-LONG CONFLICT RATTLING LIBYA’S STABILITY
Oil production from Libya was suspended during the first civil war at the start of the previous decade, when political rivalry between Haftar and Gaddafi forced international oil companies to shut down local production. As a consequence, Libya’s oil output fell from an average of 1.54m bbl/day in 2010 to an average of 0.27m bbl/day in just a couple of days.

After the killing of Gaddafi, the nation was split into two rival powers. The oil-rich east, where loyal soldiers to Khalifa Haftar elevated their Libyan National Army in Benghazi and the west, where the internationally recognised government resides in Tripoli, including the National Oil Company.

Libya has been engulfed in violence and political division ever since the revolution that toppled Gaddafi, suffering multiple drops of oil production between 2011 and 2020 as military groups blocked, damaged or attacked key terminals.

“Oil production is put at risk from these political issues because of the significant role rival armed groups play in Libya and the fact that control of oil infrastructure is widely seen as a means to exercise influence,” Bronze added.

In March 2020, Tripoli set out to restore the Ministry of Oil to assert greater control of the Oil Minister Mohamed Oun- which had little influence over the country’s industry. Instead, large production and export facilities were controlled by Mustafa Sanalla, chairman of the National Oil Corporation.

The second biggest drop in oil production happened a year ago when Haftar declared himself as the de facto-leader while the LNA seized Tripoli. Libya’s second civil war was further exacerbated in June this year when LNA was finally forced out of Tripoli by the Government of National Accord (GNA).

An internal crisis sparked as Oun asked the government to dismiss Sanalla but the latter refused to accept the order, resulting in a deadlock.

Relative stability was finally achieved at the beginning of this year when the Libyan national oil company ramped up production from 0.18m bbl/day to 1.25m bbl/day in just four months.

On March 9, 2021, Sanalla said in a video interview that Libya is looking to increase its oil production to 1.45m bbl/day by the end of this year.

The question remains whether the December elections will further kindle Libya’s current rivalry between east and west and the dichotomy between the government and the NOC chairman Sanalla.