That was a key message among panellists at the ICIS Recycled Polymers Conference in Atlanta, Georgia, US.

“One of the most significant challenges is access to feedstock – how you get that in a form that is actually usable, convertible, that can be done at scale with the right economics,” said Tim Stedman, CEO of Agilyx, who spoke on a panel of executives.

“Resolving that will really enable the great innovations that are happening downstream in terms of converting and purifying products,” he added, pointing out that the industry should not just “leave it to the waste guys” to figure out. 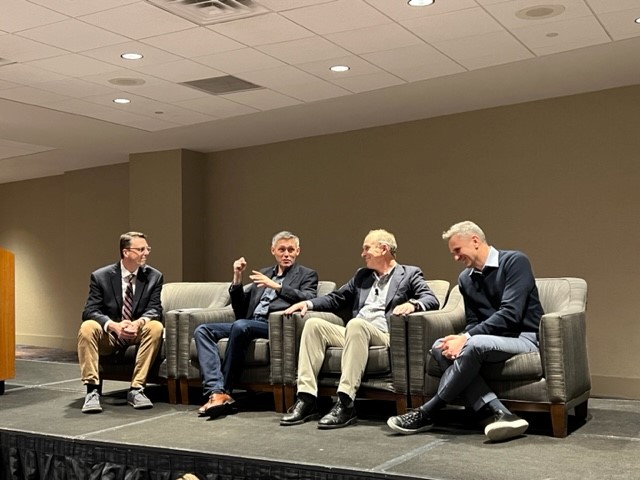 However, it doesn’t hurt to put major plastics recycling plants on the ground, to attract the right feedstocks at sufficient volumes, said an executive at Eastman, which is building a polyester recycling project with input capacity of 110,000 tonnes/year at Kingsport, Tennessee, for start up in Q1 2023.

“If you show up with a checkbook, you tend to find more feedstock. That works when you’re building a 110,000 tonne/year plant but as we try to create a truly circular economy, we’re going to have to solve the waste and infrastructure problem,” said Scott Ballard, president of the Plastics Division at Eastman.

“We have to remember that for all parts of our industry that seem so huge today, we don’t have to go back many decades when they were much, much smaller. That’s the point we’re at – we’re at the 50,000 tonne/year steam cracker level,” said Stedman.

“Our expectation is that in decades it will be much bigger. And that’s why we want to work on feedstock to make that happen. It’s great to have scale in your conversion process but if you don’t have the feed, you have a big problem,” he added.

CREATING AN ECOSYSTEM FROM SCRATCH
Along with feedstocks, the other big challenges for chemical recycling of plastics in particular stems from the fact that the entire industry and ecosystem has yet to be created, he pointed out.

“The regulations are not there, there are doubts about technology performance, there are all sorts of stakeholders like NGOs that might not trust the technology or our intentions, while brands are trying to assess their options and costs,” said Ballard.

“When you’re trying to get offtake agreements for a plant that’s not built yet, where you can’t prove what the quality is going to be, it’s trying to stand up something that has no legs yet,” he added.

However, once chemical recycling plants start operating at scale, there will be momentum behind this, powering the ecosystem, he said.

BUILDING PUBLIC TRUST
On the issue of public trust, it’s important that it’s not just the chemical industry advocating for chemical recycling of plastics, he noted.

“You have to be able to engage differently and to get different players in society to advocate for innovation. We try to get brands more out there – the brands that people trust and value, and that they buy things from every day,” said Ballard.

“We’ve got to get consumers understanding these kinds of innovations and accepting them because ultimately consumers influence NGOs and regulators, and the rules and definitions by which we operate,” he added.

MAKE IT EASY FOR CONSUMERS
Industry and government must not only get more consumers to “buy into” recycling as a concept but also make it easy for them. In the US, only about 16% of plastics are recycled – about the middle of the pack among industrialised nations.

“There’s an element of making it easy for consumers – taking away the barriers. If you’ve got very complex recycling rules, and the reality is that most people can’t tell the difference between different types of plastic… it just all goes into landfill,” said Stedman from Agilyx.

“It’s about systematically providing routes to make it easy for people to act, and then working on building the trust so that when they do act… something is genuinely happening to make it a useful product again,” he added.

Producers also have the responsibility to make products that are “easy to recycle and easy to understand” for consumers, said Jeff Gold, co-founder and chief technology officer of plastics recycling company Nexus Circular.

Digital watermarks on plastic packaging and containers that can be scanned by consumers as well as waste sorting machines, can be one of the useful tools in making it easy for consumers to recycle different packaging materials, said Gold.

“It’s about reducing downcycling, and overall about increasing the quality and quantity of material that can go into new products,” explained Larry Logan, Digimarc chief evangelist, sustainable solutions.

Consumers scanning digital watermarks on packaging with their phones can be directed on how to recycle it and where in terms of collection points, he pointed out.

“If it’s easy, it will happen. If it’s hard, it won’t. We’re a society that is accustomed to everything being easy,” said Gold from Nexus Circular.

The Cyclyx International joint venture between Agilyx (75%) and ExxonMobil (25%) is building a consortium of players across multiple sectors with the goal of boosting global recycling rates from 10% to 90%.

Cyclyx’s will build its first advanced plastic waste processing facility in Houston, Texas, US with ExxonMobil and LyondellBasell as key offtake partners. The facility will have capacity to produce 150,000 tonnes/year of plastic waste feedstock tailored for both chemical and mechanical recycling upon start-up in 2024.

“The City of Houston partnership is really looking at radically changing the way companies, individuals and retailers behave in order to capture, not parts of the plastic waste stream, but all of it,” said Stedman from Agilyx.

“Then you can start optimising it, routing it to the right places, enabling chemical and mechanical recycling. A big part of it is consumer education and trust,” he added.

SUCCESS BEGETS SUCCESS
As chemical recycling projects start to come online, it’s important to show that they are successful and making a difference.

“It’s important that groups like ours and others have success because success has a thousand mothers but failure is an orphan,” said Gold from Nexus Circular.

As Nexus’ first project started up, waste providers were initially hesitant and supplied some material, but once it showed it would take material consistently and pay a fair price, “it’s become like a magnet”, said Gold.

“This stuff is now coming out of the woodwork. We have people coming to us every single day. If you’re successful and do what you say you’re going to do, it carries a huge amount of weight. Our jobs are to develop an industry. We all want our individual companies to succeed but it’s much bigger than that,” he added.

Ultimately, the economics have to work, and that’s why it’s critical to have an efficient supply chain.

“You can have the coolest technology in the world and great relationships, but if you don’t have an economically viable business model, it really doesn’t matter,” said Gold, who pointed out that optimising the supply chain and logistics must be key areas of focus in plastics recycling.