HOUSTON (ICIS)–ANSAC – the sales, marketing and logistics arm for three US soda ash producers – has announced that it is increasing soda ash prices by $25-30/tonne, effective 1 April, for customers with quarterly contract pricing, as contracts allow, a source at ANSAC said on Monday.

The majority of ANSAC’s quarterly contract pricing is in Asia.

The producer is operating one of the two plants at the facility at partial capacity at the moment, but the larger, 1.8m tonne/year plant is expected to remain shut down for another six months. As a result, China’s domestic and export prices have climbed due to the supply shortage.

ANSAC, headquartered in Westport, Connecticut, is the international marketing arm for three US soda manufacturers: Tronox Alkali, Ciner Resources and Tata Chemicals. ANSAC will ship approximately 5m tonnes of soda ash around the world in 2016, a company source said.

Other US soda producers include Solvay Chemicals and Searles Valley Minerals. 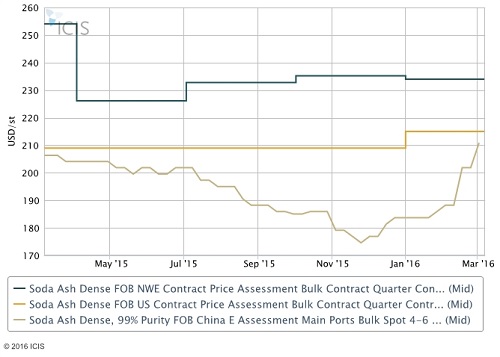