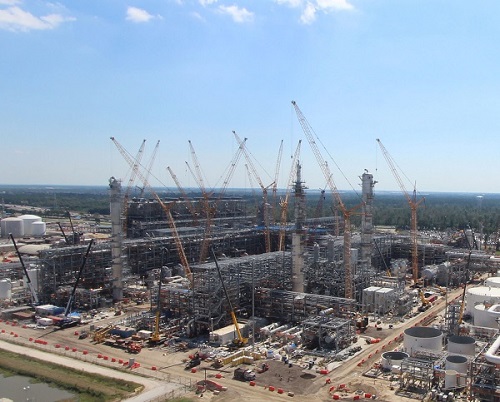 HOUSTON (ICIS)–Chevron Phillips Chemical expects to start up its new 1.5m tonne/year ethane cracker in the second half of 2017, an executive for the US-based company said on Wednesday.

The company is building the cracker at its Cedar Bayou complex in Baytown, Texas.

The cracker will provide feedstock for the two new polyethylene (PE) plants that the company is building in Old Ocean, Texas. The PE plants should start up in mid-2017, said Ron Corn, senior vice president of projects and supply chain for Chevron Phillips Chemical. He made his comments during a tour of the company’s cracker site.

“These are modern leading-edge technologies,” Corn said. “Our scientists are working on more customised resins with more unique properties. These units will have the flexibility to make these resins.”

Initially, the company expects to export about 30-50% of the output of the PE plants, Corn said. That is in part because the company will continue to adjust the plants to make the company’s more advanced grades.

In addition, Chevron Phillips needs to qualify these grades with some US customers, Corn said.

Ultimately, the plant’s level of exports should match that for the company as a whole, which exports about 20% of its PE.

Nonetheless, Chevron Phillips is developing alternative routes to ship the plants’ PE in case of any possible bottlenecks at the port of Houston, Corn said.

One route will go to the US west coast by way of Fort Worth, Texas, he said. Another route would ship the pellets to Charleston, South Carolina, where they could be shipped to Europe or Latin America.

The cracker will lack the feedstock flexibility of the majority of Chevron Phillips’s other plants in the US, as it will use only ethane, said Steven Prusak, commercial director for the company’s US Gulf Coast Petrochemicals Project. This decision allowed the new cracker to take up less space and to avoid using bulkier parts.

Chevron Phillips will still have feedstock flexibility, since most of its other crackers can use other natural gas liquids (NGLs), Prusak said.

The company’s new cracker will be among the first wave of plants to start up in the US Gulf Coast. These new plants will increase demand for ethane.

Prusak expects the ethane supplies in Gulf Coast will be sufficient to meet this increase in demand. Currently, companies that extract ethane are leaving hundreds of thousands of barrels of the material in the natural-gas stream because current prices do not justify separating it out.

Companies will stop rejecting this ethane once demand rises from the new crackers, Prusak said. Overall, US ethane production will remain competitive.

Chevron Phillips is still on the lookout for new projects, and the US is one of the prime locations it would consider, Corn said. However, the company is currently focused on getting its new plants up and running.

The origins of Chevron Phillips’s new plants go back to August 2010 during a slide presentation, Prusak said. At the time, it was radical thinking to build a such a project on the Gulf Coast.

However, the US was at the start of its shale-gas boom, in which production of ethane and other NGLs would subsequently rise, bringing down prices for feedstock and giving the nation a cost advantage against much of the world, which relies mostly on oil-based feedstock.

When that slide presentation was first made in 2010, Prusak expected a few other companies would also build plants in the US.

Some of these would be Asia-based producers, he said. Their perspective as naphtha-based producers would help them appreciate the feedstock advantage that could be achieved by building in the US. “If you looked from the perspective of Asia, a US plant looked like a great opportunity.”

Others would be companies like Dow Chemical that buy large amounts of ethylene, Prusak said.

While he expected a few companies to build crackers, he did not expect the wave of plants that followed. ExxonMobil’s announcement of its cracker’s project confirmed the trend, Prusak said.

The following table from ICIS shows the new crackers announced by companies.