Fisterra Energy, the Mexico-focused energy subsidiary of US investment group Blackstone, is prepared to offer the first ever financial swap contracts for the country’s power market through its commercial brand EKTRIA, the company’s director Enrique Gimenez told ICIS.

EKTRIA is prepared to offer a forward curve of contracts for baseload swap volumes of between 1-20MW, depending on the product, to be traded on a bilateral basis over-the-counter.

The US dollar denominated contracts will be based on the hourly national energy component of the local marginal price for the Sistema Interconectado Nacional power grid, published daily by grid and market operator CENACE on its website.

The settlement and payments of the swap will be in Mexican pesos after converting the US dollar dominated price at the Bank of Mexico’s fixed Mexican peso-US dollar exchange rate on the day after the end of each settlement period.

The contracts on offer will be for each of the first six months of 2017 starting in January, quarterly 2017 contracts and contracts for calendar years between 2017 and 2021. EKTRIA’s offered prices can be seen in the table below. 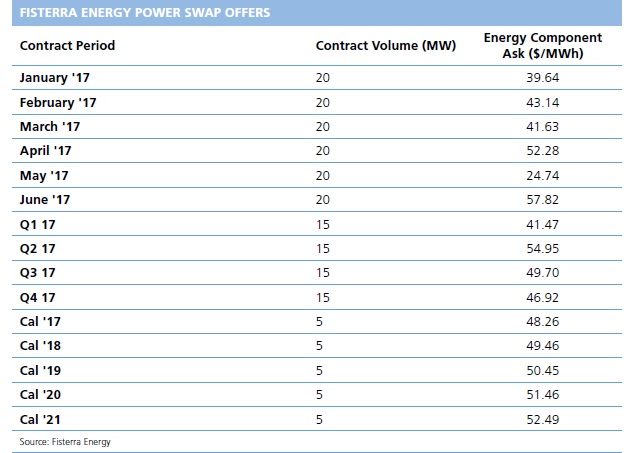 The monthly swap contracts will be settled daily and paid as a contract for the hour-by-hour difference between the fixed price offered by EKTRIA and the variable price at the end of each month of maturity.

Likewise, the settlement of quarterly and yearly contracts will also be related to the hour-by-hour differences between the EKTRIA price and the variable price. These contracts will be settled monthly on a cascading basis, with each month of the contract’s duration settled on the first day of the following month.

The contracts will be offered with a disclaimer attached. Fisterra plans to include only a two-week window for the offers to be accepted from the date of their initial publication. Every two weeks a new forward curve will be offered in the Mexico Energy Report and on the EKTRIA website.

EKTRIA will accept the first tranche of offers from 9-22 November. The company is also looking for counterparties with a strong credit rating.

Further information on the swaps contract offer can be found on the EKTRIA , or by contacting EKTRIA by email at trading@ektria.com or by phone at +52 5551251699. james.fowler@icis.com