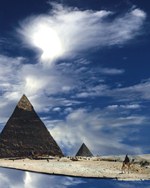 LONDON (ICIS)–Egypt will look for lucrative long-term deals to import refined products or turn to spot tenders with international traders to meet the vacuum left by Saudi Arabian Oil Company (Saudi Aramco)’s reported decision to indefinitely suspend its supply arrangement with the country, according to analysts.

The terms of such spot tenders will be market-driven and less favourable to Egypt, James McCullagh, oil products analyst at Energy Aspects said.

“The Saudi Aramco supply arrangement included some very lenient credit terms. Ideally, Egypt will look for a similar long-term deal, on favourable terms, with another Gulf state. ADNOC of UAE has supplied under a similar deal in the past,” the analyst said.

Saudi Aramco in April entered into a deal to supply state-owned EGPC 700,000 tonnes of petroleum products. The $23bn deal was supposed to last over five years. The Saudi company has given no reason for the suspension, and had not responded to requests for comment at the time of publication.

Ehsan ul Haq, oil researcher at KBC Advanced Technologies said: “[Egypt] can also turn to Iran or other GCC countries for help. However, a shift to Iran could further alienate the Saudis.”

The populous North African country is fighting off high inflation, a risk heightened by a government decision on Thursday 3 November to unpeg the Egyptian pound’s near-steady exchange rate against the US dollar, a move that has reduced its value by 50%.

The monetary policy move is intended to meet terms stipulated by the IMF for a $12bn loan which could relieve some of the country’s dollar shortage and aid in the purchase of dollar-denominated crude oil and refined products from sellers abroad.

Egypt has the second largest refining infrastructure in Africa, and already has a memorandum of understanding in place to import crude oil from Azerbaijan’s state oil company Socar.

“On the product import front, EGPC’s room for manoeuvre should increase since the devaluation should pave the way for the disbursement of a $12bn IMF loan, which is contingent upon the on going ‘normalisation’ of currency values, fuel pricing and subsidies,” McCullagh said.

But Egypt faces potential political unrest in the wake of the government’s decision to push subsidised fuel prices up, and possibly even negative demand growth for refined products.

On Friday 4 November, the government increased prices by nearly 50% to 2.35 Egyptian pounds for a litre of lower-grade petrol.

This is not the first time Egypt has cut its fuel subsidies, helped by a fall in crude oil prices. Subsidies account for more than a quarter of government spending, and is unpopular with the IMF.

“The price of gasoil, which accounts for a third of Egyptian demand, rose by 30% overnight, for example, albeit from a very low base. Given the wider inflationary pressures affecting consumer spending, we are likely to see a slowdown in oil demand growth-potentially even negative demand growth,” McCullagh said.

Sources in the Egyptian polymers market do not expect to feel any impact from the development, saying it will mostly impact the petroleum business, and not the petrochemical markets.

Polymer demand in Egypt is already suffering as a result of the dire financial situation in the country. Demand for polymers such as polypropylene (PP) and polyethylene (PE) has been negatively impacted by the lack of US dollars in the market, meaning buyers simply cannot get hold of the cash or the credit to pay for imports.

“It’s a terrible situation for us,” an Egyptian PP buyer said last week. “The price [of the pound] is going up every day in the banks, which is expected, and [now we are] looking for stability but it’ll take one or two weeks.”

Egyptian PP producer the Egyptian Propylene & Polypropylene Company (EPPC) will enter a planned month-long maintenance turnaround at the end of November, and sources in the market said it may feel less of an impact from the floatation, returning to the market once the economic outlook is more clear.