The Belgian power supply picture is expected to move into a period of relative stability over the coming few years compared to recent ones. A nuclear phase-out has been postponed to 2022 and a decline in gas-fired capacity is slowing down.

However, the country continues to rely on imports, and the question of whether Belgium still needs a strategic reserve is now largely decided by events beyond its borders, particularly in France.

After a string of gas-fired plant closures were announced in 2012-14, most of the concerned capacity is now already off the market, but was until now available to the strategic reserve.

This includes the 485MW Seraing and the 265MW Vilvorde plants, which were contracted into the reserve for a three-year period in 2014. The 376MW gas-fired plant Twinerg in Luxembourg, which was considered for the reserve in 2015, will also no longer be available to the open market.

The 460MW Drogenbos plant is in a different category, as power incumbent Electrabel has kept it on the market despite previous announcements. The plant has mostly run as an open-cycle turbine, limiting its capacity to 230MW, but will run as a combined-cycle turbine until 26 February, reflecting the relatively favourable conditions for gas-fired plants this winter. The plant is scheduled to finally close in November, after which it may enter the strategic reserve.

The smaller plants Angleur 3, at 50MW, and the 22MW Izegem are also expected to close in 2017, as well as a 52MW combined heat and power plant at Ham, Ghent.

The last big coal plant in Belgium was closed in April 2016, when the 656MW Langerlo plant was decommissioned. 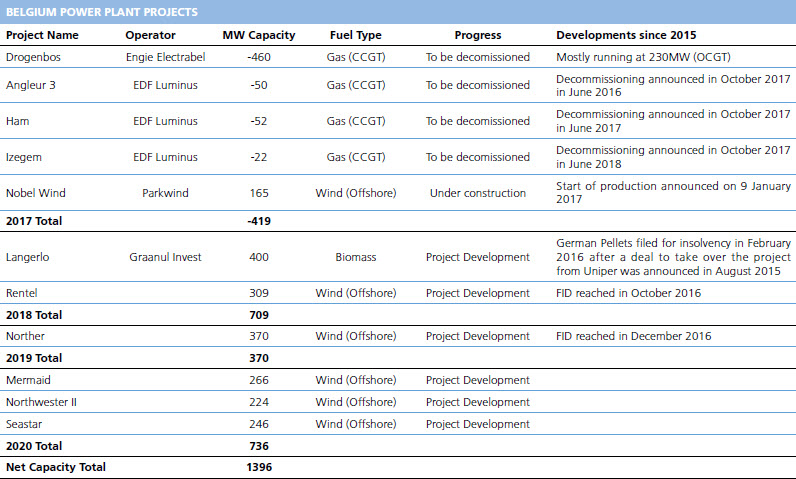 New capacity in the coming years will primarily come from renewables.

The Langerlo biomass conversion project appears to be back on track, as Estonian group Graanul Invest acquired it from wood pellet producer German Pellets in June 2016. The 400MW project is scheduled for completion in 2018, while the yearly capacity increase due to smaller units coming online is estimated at 40MW, according to transmission system operator Elia.

In offshore wind, the start of production at the 165MW Nobelwind concession was announced on 9 January 2017. This follows the financial close in October and December 2016 of the 309MW Rentel and 370MW Norther concessions, which are scheduled for completion in 2018-19. Future offshore projects are Mermaid, 266MW; Northwester II, 224MW; and Seastar, 246MW, which are expected to bring combined capacity close to 2GW by the end of the decade, up from 713MW in 2016.

The rate of new onshore wind projects is about 175MW/year, according to the same source, while the equivalent number for solar projects is 200MW/year.

Electrabel also has plans to expand a pumped storage plant at Coo-Trois-Ponts, by adding a third upper reservoir, increasing generation capacity from 1.2GW to 1.8GW. The development is designed to improve flexibility in the Belgian power system, but is unlikely go ahead without adaptations to the legal and regulatory framework for storage in Belgium, which the government has said it intends to make. joachim.moxon@icis.com