SINGAPORE (ICIS)–China’s domestic supply of methanol is expected to exceed demand in the second half of the year, and keep the downward pressure on prices of the material.

The estimates are based on methanol expansion and production plans, as well as operation plans for a major end-user – the coal-to-olefins/methanol-to-olefins (CTO/MTO) sector, which account for 45% of China’s methanol consumption.

This year, the CTO/MTO sector is expected to use up 28.5m tonnes of methanol this year, based on the plants’ projected average run rate of 85%.

In the first half of 2017, the sector’s methanol consumption stood at 12.4m tonnes, down by 10% from expectations with a 43% share of China’s total demand for the material, industry sources said.

Notwithstanding the lower-than-expected demand that weighed on methanol prices, about 5m tonnes/year of new capacity is slated to come on stream in the country in the second half of the year. (Please see table below)

As of end-2016, China’s methanol production capacity stood at 70.1m tonnes but remained a net importer of the material. It imported a total of 8.8m tonnes of methanol last year, according to official data. Methanol imports in the first half of this year were at 3.9m tonnes.

On the import front, supply will also get a boost as Iran’s new 2m tonne/year plant is due to come on stream in October, and exert pressure on import prices, industry sources said. China is a major export market for Iran’s methanol.

Demand, on the other hand, may get a little boost in the second half of the year as some domestic MTO/CTO plants in China are expected to ramp up production or restart operations, while a few start-ups are due late in the year.

But the projected overall consumption growth will not be as strong as the increase in supply.

Domestic methanol prices in China had shed 23% from the start of the year to Chinese yuan (CNY) 2,368/tonne ($352/tonne) ex-tank Jiangsu in end-July, according to data compiled by the China editorial team at ICIS.

The slump was attributed to weaker-than-expected demand from the MTO industry and tightened liquidity.

In the first half of the year, the CTO/MTO industry had registered an average production loss of CNY600/tonne. The loss ballooned to as much as CNY2,000/tonne in early March, when the price spread between methanol and downstream polypropylene (PP) and monoethylene glycol (MEG) significantly narrowed, industry sources said.

The heavy losses prompted some MTO producers in China’s coastal regions to either cut operating rates or suspend production from the first quarter of the year. 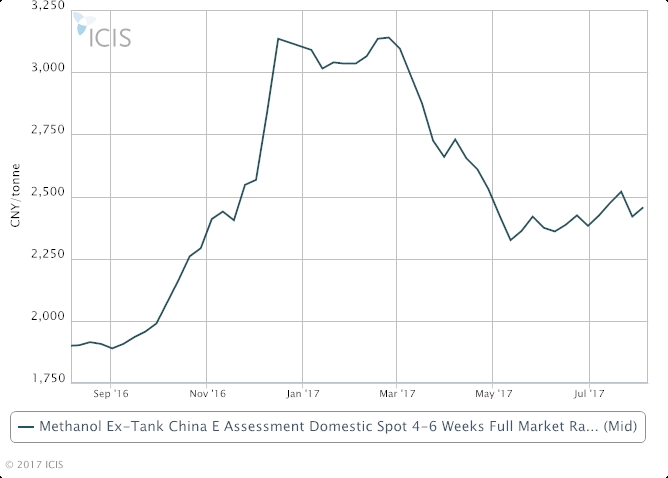