HOUSTON (ICIS)–Several more disruptions have occurred in Texas as Hurricane Harvey moves closer to the coastline towards Corpus Christi, with Dow Chemical saying on Thursday that its Seadrift manufacturing site has begun implementing plans to shut down. 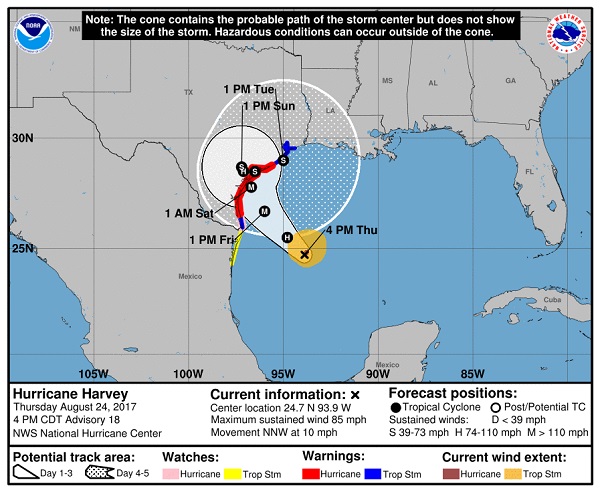 Dow said its other sites in Texas continue to be operational.

Magellan Midstream Partners said it suspended operations at its terminal and 50,000 bbl/day condensate splitter in Corpus Christi on Thursday. Its Galena park terminal, as well as various pipelines, are still operating.

DuPont said its site in Victoria, Texas, is already shutdown due to a previously-planned outage. But similar to INEOS’ plant in Pasadena, the DuPont plant will commence start-up activities when the weather improves.

As of 16:00 Houston time (22:00 GMT), Harvey was moving toward the north-northwest near 10 miles/hour (17 km/hour), with maximum sustained winds of 85 miles/hour, the National Oceanic and Atmospheric Administration (NOAA) said. The wind speed makes Harvey a Category 1 hurricane, and NOAA expects it to strengthen to a Category 3 storm, which wind speeds of at least 111 miles/hour. It should make landfall by Saturday.

Regarding ports, the US Coast Guard (USCG) listed the major ports along Texas’ coastline as open but with various restrictions.

Port Houston said its container terminals will be opening on Friday, adding they would provide updates if operations change.

The Houston ship channel is closed to inbound traffic, said a dispatcher at the Houston Ship Pilots.

The port of Corpus Christi is also closed to inbound vessels.

Market discussion this week included concern over the potential effects of Hurricane Harvey on operations along the US Gulf Coast, and possibly on Mexico’s polyvinyl chloride (PVC) production.

Sources in Mexico said that, so far, plants in Mexico are expected to continue operating normally, although Mexichem’s and Occidental Chemical’s (OxyChem) joint venture cracker in Ingleside, Texas, was shut down in anticipation of the hurricane.

OxyChem uses the ethylene from the cracker to produce vinyl chloride monomer (VCM), which Mexichem transforms into PVC resin pipe at its plants in Mexico and Colombia.

Sources in Mexico said that PVC production problems could arise if the Ingleside cracker shutdown lasts for an extended period.

In the US, five or six refineries could take a direct hit from the hurricane, an analyst said.

The following companies have reported shutdowns in the US.