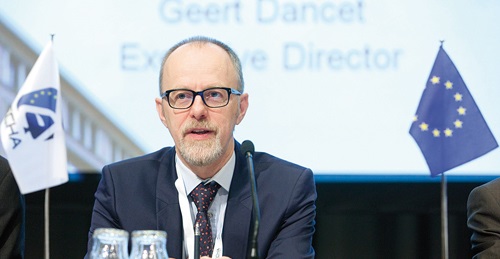 Geert Dancet, who is to leave his post in December, argued that the Commission’s intention for ECHA to continue assuming new regulatory tasks would be at odds with the 2014-2020 current EU budget, which had not “foreseen” the increasing tasks the Agency has undertaken over the last four years.

“The Commission basically wants to stick to its own subsidy numbers, whatever happens. We have been lucky to receive more registration fees than previously estimated [in 2013] so, in fact, ECHA has not used the full amounts of the subsidy foreseen in the 2014-2020 budget,” said Dancet.

“However, when we start getting less fees it will make it much more difficult, so we should get more subsidy than initially planned. Next year’s budget was estimated in 2013 as a difference between the agency’s budget and free revenue and they [Commission] couldn’t care less whether the estimate is wrong or not.”

The registration fees which were ECHA’s saviour in past years, however, will greatly dry out in 2019, as the latest phase of chemicals regulation Reach’s implementation is completed in 2018, when chemicals produced in quantities between 1 and 100 tonnes need to be registered.

Companies which register chemicals within ECHA have had to pay a fee, which has been a constant since Reach’s implementation started in 2007.

However, the picture may completely change in 2019 when registration fees decrease considerably.

ECHA’s chief added that it is “frustrating” to see the rigidness of the EU’s seven-year budgets, adding that discussions for the 2019 budget for the regulator are becoming “very difficult” because of the foreseen decrease in fees.

“We have more tasks to develop than the Commission originally approved, and that has caused consternation because we have far more work than originally planned. Many more substances [fall under Reach’s remit] than those added in the different lists of chemicals and, on the other hand, we would need extra staff next year but for that we would need to cut spending elsewhere.”

As the EU’s commerce in chemicals outside of the bloc still stands among the most important globally, other jurisdictions are looking at Reach – namely the most advanced chemical legislation – in order to, firstly, do business with EU firms and also as a way forward to reassure their public opinions about the safety of the chemicals used in manufacturing.

For that purpose, ECHA is also expected to establish international relations with other regulators but, once again, money is tight and the tasks too many. Moreover, the Commission and the EU’s 28 member states – the Council – differ on what they expect from ECHA.

“The Commission is very keen for us to reduce as much as possible our international activities so we can focus on the legislative mandate. What we can do internationally… there are little resources available for that. On the other hand, member states would like us to do more on the international side, but our scope for that is limited,” said Dancet.

His successor taking over on 1 January 2018 will, however, earn less money than Dancet as per the EU’s complicated scale of salaries divided in grades and steps, which can be seen on page 5 of the EU’s Official Journal from 14 December 2016. His successor will be at a grade lower than him.

Dancet’s other areas for concern are the new chemicals-related bodies which have sprung up during the last four years.

For instance, the Observatory for nanomaterials, which is meant to be the next crusade on the EU’s attempt to make chemicals safer, has been allocated a budget of only €800,000, but it’s ECHA’s employees the ones bearing the largest burden of workload.

Another concern would be the so-called Poison Centres, national helplines in the 28 countries within the bloc which deal with the safe use of chemicals. According to the EU’s website, they receive 600,000 calls per year and, once again, ECHA is expected to step in.

“Again, there is a lot of activity foreseen for ECHA, which is mandatory but also optional. We could help the national Poison Centres much more than the law says if we had central data management systems. However, no money is foreseen for that. How do we finance that?” said Dancet.

“Our life is going to be very difficult.”