SINGAPORE (ICIS)–Toluene di-isocyanate (TDI) prices in Asia and the Middle East surged to record highs – a deja vu of the market movement almost exactly a year ago – due to tight supply, but further sharp gains are not expected.

September/October is a typically strong demand season for the Middle East and this could keep prices supported over the coming weeks, especially as supply from some Korean and Japanese manufacturers could remain relatively tight.

“Many foamers in the Middle East are low on inventories. This is fact,” said a Middle Eastern source.

These were the highest levels for TDI in the GCC since ICIS began tracking the market in August 2011.

The Middle East imports most of its TDI from northeast Asia.

In the China/Hong Kong market, the average spot import prices were assessed at $4,450/tonne, the same all-time high seen in 2016.

The gains are taking place almost exactly a year after a similar trend caused turmoil in the isocyanates markets.

In October 2016, TDI import prices in Asia and the Middle East jumped by an unprecedented $1,000/tonne and above or 33% following a force majeure by major German producer Covestro on isocyanates supply to Europe.

Market sentiment worsened after chemical major BASF had a major production disruption at its Ludwigshafen site in Germany in the same month last year. Worried isocyanates customers at that time scrambled for cargoes while sellers rode the frenzy by jacking up prices.

This year’s TDI gains were more gradual but the quantum of the rise has been larger, with GCC import prices gaining a total of $1,200/tonne since the week ended 20 July.

In China’s domestic market, TDI prices had skyrocketed by 75% in a span of one month from early July due to reduced availability of locally produced material.

In the week ended 20 September, the average weekly TDI prices in east China retreated from their 2017 peak by Chinese yuan (CNY) 500/tonne ($76/tonne) to CNY39,000/tonne DEL (delivered). Suppliers lowered their offers late in the week amid dwindling buying appetite for high-priced cargoes after recent spike.

“[China domestic] prices will likely be stable to slightly softer and we are unlikely to see big price fluctuations for the rest of the year,” a Chinese trader said.

“[China TDI] producers do not have inventory pressure and are not in a hurry to offload their cargoes,” the trader continued.

Asian producers, meanwhile, said prices are being driven higher simply by a lack of available material. Some also said high prices of products in China were behind the broader gains for TDI.

The supply tightness was exacerbated when Hurricane Harvey slammed into the US Gulf Coast in August, triggering shutdowns at US isocyanates facilities.

TDI buyers are irked that they are again at the mercy of another surge in prices, with some smaller buyers heard having been priced out of the current market as tight margins have limited their ability to pass on the higher costs to end-users.

“These sellers are not making a lot of friends right now,” said one market source.

Still, some buyers in the Middle East dealing with high-value products such as automobiles appear to be willing to continue discussions with sellers.

Some sources said smaller buyers were rejecting the higher prices although TDI inventories in the GCC and the rest of the Middle East were heard to be running low.

“Buyers are not accepting. They simply can’t afford it. This move is too fast and I fear this may not be sustainable,” said the same market source.

But supply is expected to be tighter next month due to a scheduled plant turnaround at a major northeast Asian producer.

South Korea’s Hanwha is expected to shut its 150,000 tonne/year TDI plant for regular maintenance in the second half of October, thereby further constraining import availability for both the Middle Eastern and Asian markets. 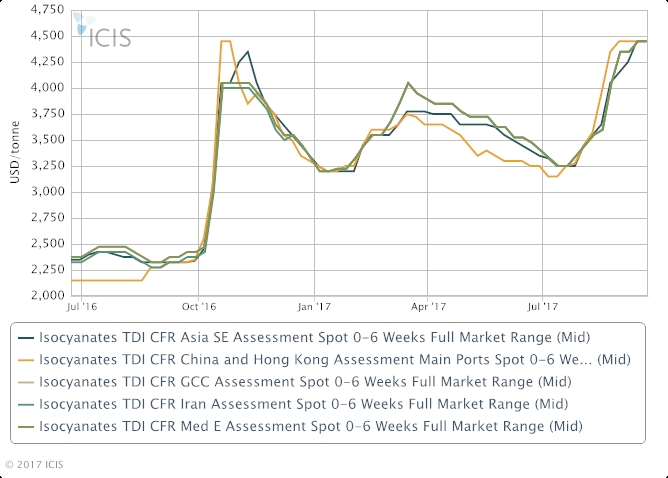 Pictured above: Toluene diisocyanate (TDI) has applications in the manufacture of polyurethane flexible foams used in upholstery, mattresses and automotive seats. (Source: ViewPictures/REX/Shutterstock)