A great deal of industrial capacity has been added regardless of supply and demand fundamentals and the impact on the environment. This has been a particular problem since the launch of China’s huge post-global financial crisis economic stimulus package. 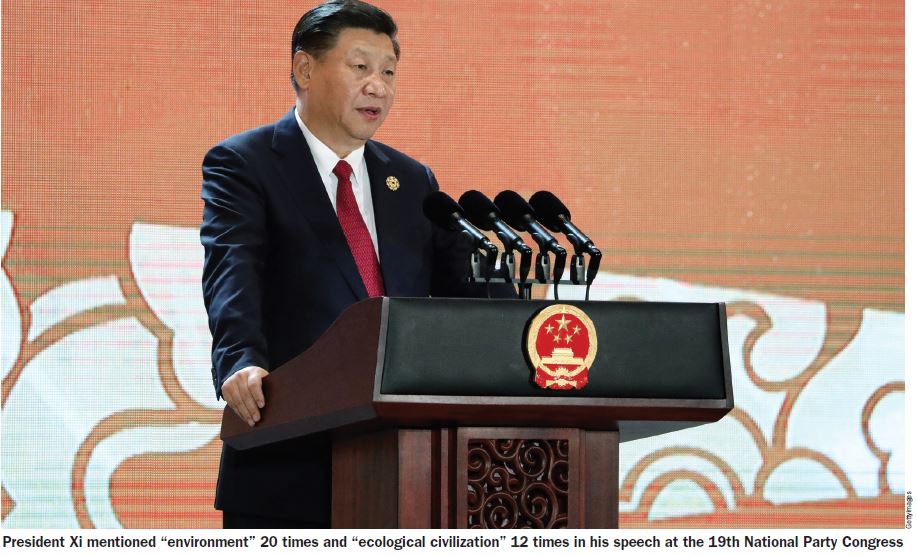 Also from early last year, many provinces were required to start compiling “natural resource balance sheets”. These are being used as the basis for performance indicators for local government officials that take into account implementation of environmental rules.

In late 2016, China launched a nationwide programme of environmental inspections. Both the number and quality of inspections have increased.

During 2017, several more waves of these environmental inspections have taken place, leading to the temporary closure of some 40% of China’s total manufacturing capacity. Plants have been typically shut down for two-four weeks until they have rectified problems with emissions.

In September of this year, a five-month campaign was launched in 28 northern cities to improve air quality during the winter months, when air quality normally deteriorates because of the greater use of coal for heating purposes.

Restrictions include reduced steel output amounting to some 7.5% of annual output. By the end of October, 72 coal-fired electricity plants had been shut down and 44,000 small coal-fired furnaces.

Manufacturers in sectors such as plastics processing and printing were forced to upgrade plants by end-October to meet higher emissions standards. This forced the closure of many plants.

The Congress also saw the announcement of the formation of a new Environmental Protection Bureau. This will explore ways to reduce PM2.5 particulate matter pollution in China’s big cities.

As an indication of just how serious Beijing is about this campaign, October 2017 saw the sacking of 69 government officials in Hebei province, China’s most-polluted province, for failing to implement pollution controls. A further 154 Hebei officials were handed over to police for investigation.

Back in 2000, 11% of China’s benzene production was via coal as a feedstock, according to the ICIS Supply & Demand database. This will have risen to 20% by the end of this year. Coal-based benzene is a by-product of steel production.

This means major implications for benzene and its value chain from the loss of some 7.5% of China’s steel production during the five-month long winter air pollution campaign.

As you can see from the chart below,  China’s net benzene imports had also already risen very strongly in January-September 2017 over the same period in 2016. They stood at a seven-year high. 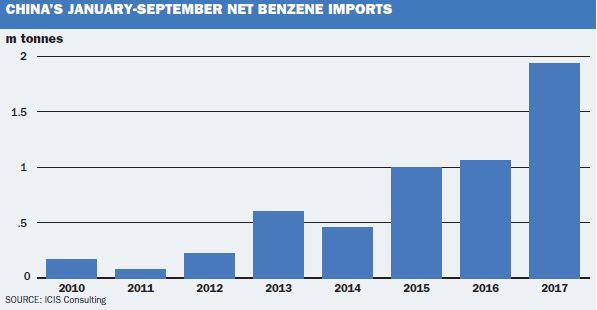 This has been the result of shutdowns of US styrene plants which forced China to import more benzene to run its own styrene plants at higher operating rates. Styrene demand growth in China during 2017 has also been very good.

We might now see a further surge in China’s benzene imports on the closure of steel capacity. This would of course be great news for exporters of benzene to China.

Every petrochemicals value chain will be similarly disrupted, but in different ways.

Polyolefins are another example. Shutdowns of downstream plastic processing capacity will be far in excess of shutdowns of polyolefins plants during the winter air campaign.

The reason is that most of China’s poly- olefins plants are modern, state-of-the-art  facilities with good emissions standards. Meanwhile, China has numerous smaller plastic processors where emissions standards do not meet today’s expectations.

Subdued demand resulting from processor shutdowns is one of the reasons why ICIS consulting expects China polypropylene (PP) prices to fall in November 2017-April 2018.

These price declines will occur despite a sharp rise in oil price, and so naphtha feedstock costs, from November 2017 until April of next year.

And whilst we are on the subject of polyolefins, what about the longer term future of coal-to-olefins (CTO) capacity additions?

Will CTO investments come to a halt because of China’s move away from coal as an energy source? Or will employment creation, via CTO plants, be more important than the environment?

Right now, though, what is clear is that there has been a major slowdown in new CTO investments in China.

This is partly the result of lower oil prices that has increased the competitiveness of naphtha cracking versus coal-based olefins and derivatives production.

The CTO process also generates higher amounts of carbon dioxide (CO2) than naphtha cracking. China is trying to reduce its CO2 emissions in an effort to play a bigger international role in tackling climate change.

As for other short term disruptions to markets caused by the environmental campaign, several styrene butadiene rubber (SBR) plants were also forced to shut down in October because they were operating coal-fired furnaces. These have been replaced by ones that run on electricity. This of course tightened SBR markets.

And in acetic acid in November, the closure of methanol and carbon monoxide plants on the air pollution campaign has reduced feedstock supply, forcing China’s acetic acid producers to lower their operating rates.

Nobody should also be surprised if further legislation to clean up the environment is introduced. Take as an example the national emissions trading scheme which is expected to be launched by the end of this year. Initially, it will cover just power generation, but could eventually be expanded to cover petrochemicals.

Here is another broad key takeaway. The environmental campaign is just one element of an entirely new economic growth model that China is attempting to build.

Gauging the implications of this new growth model on the petrochemicals industry depends on a good understanding of government policy.

You will firstly need to know every detail of each new policy initiative. Then you will have to constantly monitor how policies are being implemented.

Are you adequately resourced to achieve this? You might need to take a dedicated team to analyse government policy, as it is likely to be most important shaper of petrochemicals markets in China in 2018 and beyond.

For details on how to subscribe to our ICIS Asian Monthly PP and Polyethylene Price Forecasting Reports, please click here