SINGAPORE (ICIS)–Iran’s petrochemical exports may not get a major boost from the recent plunge of the rial – triggered by speculations of further sanctions from the US – as most cargoes are shipped out under term contracts, particularly to its key market – China.

The official and free-market exchange rates of the rial (IR) to the US dollar was unified on 9 April to IR42,000 to prevent a further slide in the currency, following a 20% slump in just two weeks from late March. 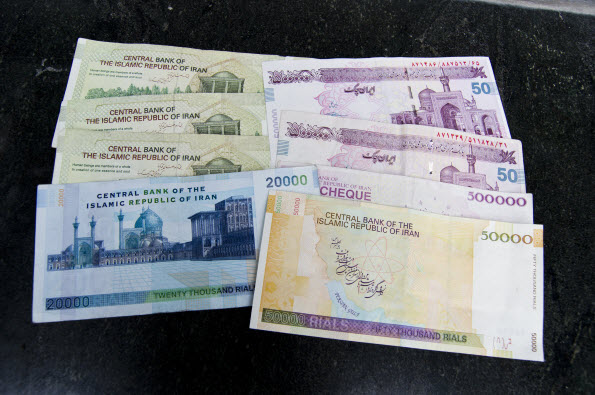 The US, under President Donald Trump, was threatening to withdraw from the negotiated nuclear deal between Iran and six world superpowers. Trump has set a 12 May deadline on US’ decision.

The unified rial exchange rate represents a depreciation of about 14% from the official rate of IR37,000 to $1; but 30% stronger than the previous market exchange rate of IR60,000.

Iran’s central bank has also set on 10 April a €10,000 cap on foreign currency citizens can hold outside banks, according to media reports.

The slump in rial’s value technically should allow Iran to offer much more competitive prices for its petrochemical exports, including methanol and polyethylene (PE), but there are constraints preventing increased trade with its major markets, apart from international sanctions-related payment issues hounding shipments coming in and out of the country.

“It could actually mean more sales for us as our exports become cheaper and our price becomes better for the buyers. We use banking facilities provided by Chinese banks and our transactions are in euros or (US) dollars,” a source at an Iran-based producer said.

Iran counts China as a major export market for PE. In 2017, Iran cargoes accounted for about 17% of China’s total PE imports.

The volume is not expected to increase by much as the cargoes are shipped under long-term contracts and not on spot basis.

Suppliers will have difficulty in immediately adjusting their pricing formula to take into account changes in the rial’s exchange rate, industry sources said.

Iran also exports PE to Vietnam from time to time but the total volume is minimal in terms of the overall southeast Asian market, which is also being served by regular suppliers from Asia and the Middle East, including Saudi Arabia.

In India, Iran’s PE shipments stood at 57,707 tonnes, which accounted for 4.6% of the south Asian country’s imports of the polymer, in the fiscal year ending March 2018.

Trades with India are done on a spot basis and should be more reactive to foreign exchange fluctuations.

But India’s reliance on imports have been declining over the past two years following expansion in domestic capacity.

On the part of Iran, suppliers have steered clear of the Indian market since the third quarter of 2017 to supply more volumes to China, where netbacks were better amid higher prices. 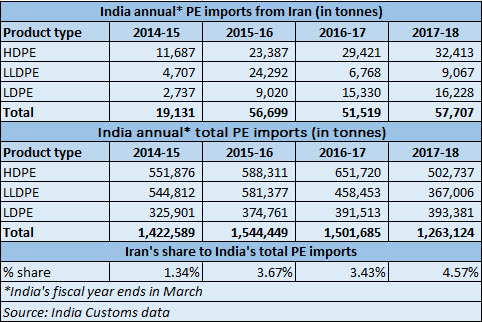 PE imports from Iran are typically undertaken on a cash advance basis in India.

Workable buying levels for these are usually $40-50/tonne lower than those for cargoes originating in the Gulf Cooperation Council (GCC) region which are procured on a 90-day letter of credit (LC) basis. This need to pay money upfront has a limiting effect on India’s intake of Iranian PE.

Within Iran, PE supply would be reduced by scheduled turnarounds at its plants in April and May, constraining availability of spot cargoes for exports, industry sources said.

For methanol, Iran exports a sizeable chunk to China. Last year, Iranian methanol at 2.52m tonnes accounted for 31% of China’s total methanol imports of 8.14m tonnes, according to official data.

But Iranian methanol producers have already been maximizing their export sales to China, leaving no further room to boost shipments, industry sources said.

An Iranian melamine producer said that the rial’s slump has no bearing on its US dollar-denominated pricing of its exports to India and Turkey, as it makes adjustments based on broader trends in the international market.

The depreciation of the rial, however, could fuel an increase in Iran’s domestic melamine prices, the producer said.

The impact has “more to do with the procurement [of raw materials]”, another source from an Iranian petrochemical producer said, adding that the currency slump “may affect our domestic sales”.

Iran may face further pressure in the weeks leading to 12 May, when Trump will make a decision on the nuclear accord.

International sanctions on Iran were lifted in 2016, when the landmark nuclear deal was reached between the country and the six world superpowers, which called for the curtailment of Iran’s nuclear development program.