NEW YORK (ICIS)–Brazil-based chemical distributor Quimica Anastacio is sharpening its focus on flexibility and nimbleness, along with organic growth versus M&A, amid a period of elevated price volatility, its CEO said.

Throughout the COVID-19 pandemic, with outbreaks rolling through different regions of the world and disrupting supply chains, the distributor has had to pivot quickly to replace some suppliers of critical materials and secure containers in short supply.

A big part of this pivot was having its purchasing department shift to about 70% FOB (free on board) in sourcing supply, where it arranges freight to directly pick up product from the port of the supplier, as opposed to CFR (cost and freight), where the supplier ships containers directly to the distributor’s port.

Prior to the pandemic, only about 30% of its global sourcing was done on an FOB basis. Quimica Anastacio sources products from 62 different countries.

“This capability was very important during this period. We had to go after the containers because suppliers had difficulty finding them and price was an issue as well,” said Jan Krueder, CEO. He made his comments in an interview with ICIS.

“The supplier has two issues – one is to have product available during a crisis. The supplier has its own challenges in producing and having enough raw materials. Then the second issue is getting the freight to our port – the port of Santos for example – when it already exports to many countries,” he added.

Thus, having the capability to arrange its own freight to pick up product directly from the supplier is a critical advantage.

Quimica Anastacio’s strong relationships with suppliers is also an advantage during periods of limited supply, the CEO pointed out.

However, the Russia/Ukraine war is causing commodity prices to surge, not only for oil-based chemicals, but for those based on corn and other agricultural inputs as well, he noted.

Price volatility is a “bigger issue”, and the key is to stay competitive under different pricing scenarios by being aligned with pricing trends, said the CEO, who also pointed out that it’s not about all prices rising, but major fluctuations both up and down for different chemicals.

In cases where prices are rising, there have so far been no signs of demand destruction, he noted.

“Before the COVID crisis, there was more incentive and pressure to buy directly and just on price. But nowadays buyers value companies that really can see the supply chain in a more complete way. So I think we are not just distributors but consultants,” he added.

“It’s not just about pressing a button and buying, but about knowing the chain, where the movements are, and what the risks are in supplies from certain countries, and in certain products. And so that’s where we can be more useful and relevant to the customer because we live and breathe these markets,” said Krueder.

With anaemic GDP growth expected in 2022 in Latin America (consensus ex-Venezuela at 2.0%), chemicals demand growth will be challenging.

However, Krueder still sees strong organic growth opportunities for Quimica Anastacio with its target of launching at least eight new products every month by working with customers.

Much of the new product development will be in specialties, where the CEO aims to boost this part of the business to 30% of sales from around 20% currently.

“This is something which sustains growth even when the economy is not growing,” said Krueder.

“We see them as independent entities with their own strategies, targets, marketing budgets and product development targets. If you don’t see each segment as a single company, it does not make sense to stay in these markets because we compete with some companies which are only focused on these markets,” said Krueder.

“If each business unit sees itself as its own company, they have to show results, and one of those results is to bring more products,” he added.

New product launches for Quimica Anastacio are primarily driven by customers looking for more efficient and economical solutions for existing specifications, rather than new formulations.

This could involve everything from modifying a product from powder to liquid form, blending, sourcing from a different country, sourcing a consolidated package of products, improving logistics or changing packaging to offer a better solution.

NO M&A IN NEAR TERM
These days, it’s hard to find a sizeable chemical distributor that is not focused on M&A but Quimica Anastacio stands out in this respect as being completely focused on organic growth.

The company generated sales of around $553m in 2021, essentially doubling sales since 2016. It ranks No 39 globally in the latest ICIS Top 100 Chemical Distributors listing.

“Our strategy is to stay independent. And it would make zero sense in this moment to go into the M&A market because we already have been growing continuously in Brazil and Latin America, and are one of the market leaders,” said Krueder.

Quimica Anastacio instead prefers to sustain sales growth by investing its own capital and launching new products with customers.

Staying independent also allows for faster decision making and being nimble in adjusting to different market scenarios, the CEO pointed out.

“We want to focus 100% of our energy on our business, and not on M&A strategies. We of course see many companies focusing on M&A with [assets] coming in and coming out. We prefer to to grow, but in a healthy, gradual way,” said Krueder.

Quimica Anastacio’s main presence is in Brazil, but it has boosted operations in Argentina and recently started distribution in Mexico. Meanwhile, its Anastacio Overseas trading company sells in almost all counties in Latin America and has recently entered Africa, he noted.

While the company has never made an acquisition, the CEO does not completely rule M&A out in the future.

“If we see our model of launching new products is getting saturated, we could in one or two years come to the conclusion that it would make sense to buy a small specialty company to get stronger in some segments. But it’s not the case right now,” said Krueder. 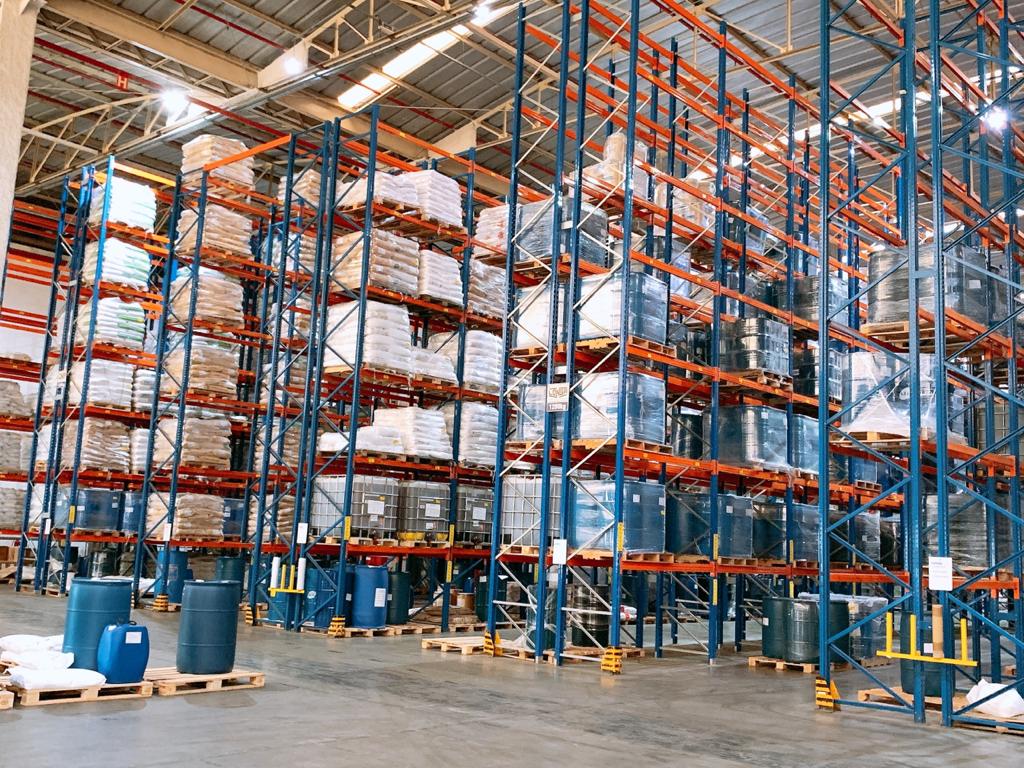 CAPTION: Quimica Anastacio is expanding its warehouse footprint in Brazil. Pictured is its distribution center in Barueri, Sao Paulo.

SUSTAINABILITY AND REDUCING CARBON FOOTPRINT
Quimica Anastacio is also focused on sustainability, expanding the number of warehouses across Brazil to cut transport distance and thus carbon footprint, as well as offering reverse logistics.

“Those that are not looking at sustainability now will be out of the game in a couple of years,” said Krueder.

“What we try to do is reduce the kilometres transported,” he added.

To this effect, the company recently opened a new warehouse in Porto Alegre in Rio Grande do Sul state in the south of Brazil, and plans to open another in Curitiba in Parana state by the end of the year, bringing the number of warehouses in Brazil to seven.

In an example of “reverse logistics”, the company supplies packaging for customers, and then arranges the logistics to collect this packaging when its use is finished.