HOUSTON (ICIS)–BP has decided to raise acetic acid prices in the US and Canada in July, the latest development in the acetyls chain following a force majeure the company declared recently after a problem arose at a Texas plant.

The price increase announcement did not mention the force majeure that BP declared on 27 April. It attributed the 3 cent/lb ($66/tonne) increase as “necessary due to continued high raw material costs and increasing logistics costs”.

BP sells acetic acid produced by the Eastman Chemical plant in Texas City, Texas, and has an agreement to buy all of the material produced at the plant through December 2031.

A few weeks after BP’s move, Dow Chemical declared a global force majeure  on vinyl acetate monomer (VAM) because BP is its main supplier of acetic acid, a major feedstock.

Then in late May, US-based Monument Chemical declared force majeure on its acetate production, referring to what it called an unforeseen acetic acid production issue. A source close to Monument said BP’s recent declaration appeared to be the reference in the letter.

Last week, Wacker Polymers said it was increasing prices for some of its copolymer dispersions by up to 10% because of the rapid rise in acetic acid and VAM costs.

The chart below shows US acetic acid prices. 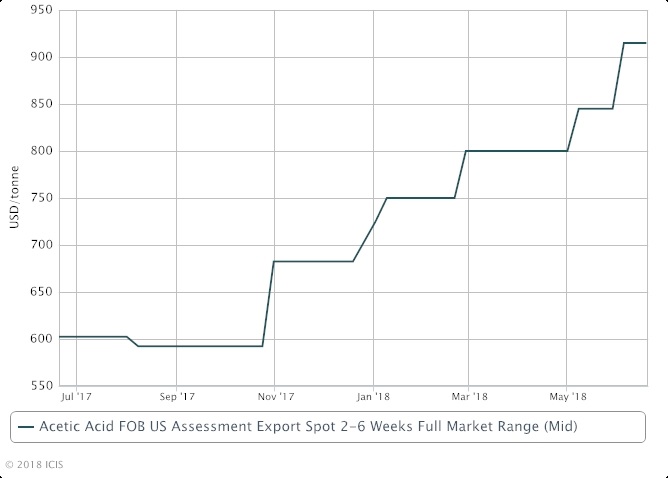 The BP price increase is only the latest in a series of hikes that followed its force majeure.

Eastman Chemical issued two 3 cents/lb price increases in June, one for 1 June and the other for 15 June, and Celanese and LyondellBasell separately issued hikes for June as well.

Talk has circulated this week that BP might restart the 600,000 tonnes/year Texas City plant before the end of June, though it could not be confirmed.

Dow’s VAM force majeure issued in mid-May said it would last about two months, which would put the end in mid-July.

Acetyl sources expect the acetic acid force majeure to be lifted first, because it is a major VAM raw material.

Photo above shows wood glue, which is often made from VAM. Photo by WestEnd61/REX/Shutterstock