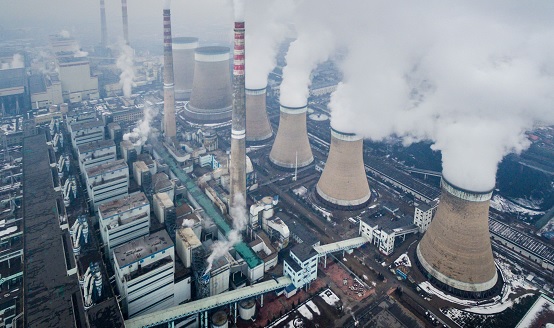 China’s State Council on 2 July released the full-text for its 2018-2020 plan which expands pollution controls to 82 cities across China.

The regions that fall under the government’s “blue sky” plan are now home to 37% of population contributing to 41% of China’s GDP, according to consultancy Wood Mackenzie.

Under the new plan, polluters will receive punitive charges with the introduction of a national pricing system for carbon emissions and the contamination of water, besides other stringent measures.

The development of a “green transport system” with higher fuel efficiency and lower emissions intensity is also a key feature of the plan, set to deliver growth in electric vehicle sales.

The latest announcement extends its reach to cities in the Fenwei plain within the provinces of Shaanxi and Shanxi, where air pollution is worsening. Shanxi and Shaanxi are major coal-producing provinces that house heavy industries.

The target area for air pollution control and prevention now includes ‘2+26’ cities, 11 cities in Fenwei plain and provinces in the Yangtze River Delta.

The Yantze river delta covers the area around Shanghai as well as the provinces of Anhui, Zhejiang and Jiangsu, which are major petrochemical-producing regions.

The plan is also set to slow down the penetration of natural gas in combined heat and power (CHP) plants used to power petrochemical sites as more of the commodity will be channelled into other sectors as a substitute to coal, Wood Mackenzie said.

While construction of gas-fired CHP plants has been encouraged in previous announcements given their environmental benefits, the government’s latest controls now look to put a ban on them, very likely due to concerns around seasonal gas shortages and the negative impact of higher costs, Wood Mackenzie said.

“China also plans to revoke legacy favourable power prices offered by local governments to energy-intensive industries,” it said. “In fact, the government wants to implement higher power tariffs to squeeze inefficient and outdated producers out of the market. This could mean higher production costs.”

Moreover, a ban on trucking to move raw materials from port to plant by 2020 could be a game changer as it creates more competition between domestic supply and imports and “strengthens the arbitrage relationship”, it said.

While this means improved supply consistency as it would be less affected by weather, it could result in higher costs for short-distance transportation, the consultancy said.

In the near term, the move could result in increased clearance time for imported coal cargoes, as witnessed last winter, according to Wood Mackenzie.

While some might fear that the measures from the latest plan will bring higher electricity prices, the overcapacity in power generation is so great in China that the price declines following Beijing’s move to liberalise electricity prices in the couple of years are likely to continue, Diana Choyleva, chief economist at Enodo Economics, said in a note for at investment research and analysis firm Smartkarma.

“Beijing is determined to make its energy sector more efficient and cleaner and there’s certainly a lot of overcapacity to cut – much of it, heavily polluting coal power,” she added.

– China’s Ministry of Ecology and Environment in late June set stringent target on air, water and soil quality in its latest campaign to cut pollution.

– Shanxi provincial government said in early June that seven chemical plants in populous cities will need to relocate to industrial parks or switch to make non-toxic products to ensure safety on surrounding community. Otherwise, they will face permanent shutdown.

– China’s domestic methyl tertiary butyl ether (MTBE) prices are expected to remain under downward pressure for a long term as a result of overall weak demand from gasoline blenders who have reduced production to meet government’s initiative to improve environment and achieve clear blue sky.

– China’s import ban on plastic waste could result in overuse of landfills and about 4m-12m tonnes of the commodity material ending up in the ocean on an annual basis, a report by the American Association for the Advancement of Science (AAAS) said.

– Stringent environmental policies in China will “profoundly impact” the chemical industry’s development for at least the next 10 years, the CEO of China National Chemical Information Centre (CNCIC) said.

– Asian polyethylene terephthalate (PET) market is likely to remain firm in the third quarter on the back of tight supply, a trend that has supported prices so far in 2018. The supply tightness is a result of production cuts in Asia and Europe while within China production has been curtailed to reduce pollution.

– China’s domestic methanol supply in the key Shandong market was tight due to restrictions on the transportation of dangerous chemicals.