It is a challenge to balance two very separate businesses under one roof – each requires a different strategy tailored to its capabilities and strengths. US-based Chemours is seeking long-term price stability for its cyclical titanium dioxide (TiO2) business with a unique proposition for customers, while expanding capacity in its fluoroproducts segment to drive the high growth in demand.

Chemours aims to drive significantly more TiO2 sales under its Value Stabilization (VS) contracts where pricing is more stable over time. “What’s reasonable to expect is that the majority of our volumes will go through Value Stabilization, but we still want to have around 20% not under VS so we have additional flexibility to operate,” said Mark Vergnano, CEO of Chemours, in an interview at the ICIS New York office. 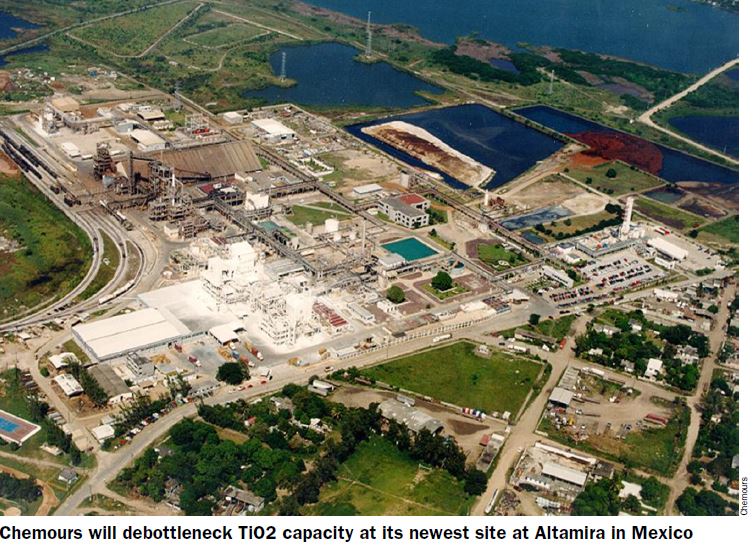 Currently over 50% of Chemours’ volumes are under Value Stabilization contracts, he noted.

Chemours’ VS multi-year TiO2 contracts allow customers to have flexibility in their volumes while maintaining a more stable price. The reception has been positive among its customers in the coatings, plastics and laminates sectors.

“Customer discussions have been going extremely well. Whether it’s in Asia or Europe or the US, customers get this concept and welcome it, as it allows them to predict prices better and also not have to negotiate every quarter,” said Vergnano.

Customers have been paring down TiO2 inventories as under VS there is no need to carry as much, he noted.

Earlier this year, Chemours announced there would be minimal price increases for customers after April under VS while others would likely see low-to-mid single-digit increases for the rest of the year.

August TiO2 price increases for customers not on VS are going into effect, the CEO said on Chemours’ second-quarter earnings conference call earlier in August.

“So we’re seeing a bit of volume correction occurring as we anticipated. We’re seeing some inventory correction in North America and expect that to continue through the rest of the year,” said Vergnano in the interview.

However, in the long run, VS contracts should “help stabilise the industry”, he noted.

And in Europe, increasing TiO2 imports from China are ”not intercepting our business – not our customers or markets”, he said.

“With [Venator’s] Pori [plant in Finland] down, a lot of TiO2 ink needs are being serviced from China,” he added. 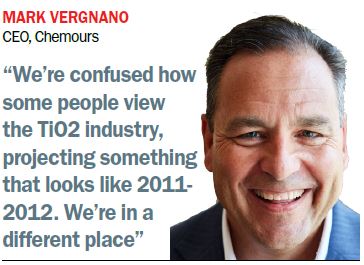 TiO2 prices will not see anything like the run-up and collapse in 2011-2012 as market dynamics have shifted and point to more stability ahead, the CEO said.

“We’re confused how some people view the TiO2 industry, projecting something that looks like 2011-2012. We’re in a different place,” said Vergnano.

“Yes, China quality will improve, but it will take many years to get to chloride levels. And we just don’t see the capacity coming on – we need about 200,000 tonnes/year just to meet demand growth. We see a strong TiO2 industry in the next few years and do not see the logic to how some see the cycle,” he added.

After the financial crisis of 2008-2009, a number of players shut down inefficient capacity, tightening the market. As global economies recovered, a massive shortage developed. Prices spiked and then China flooded the market after quickly ramping up capacity. Meanwhile, coatings companies adjusted their formulations to use less TiO2.

TiO2 prices spiked in 2011 and through the first half of 2012 before collapsing later in the year. They stabilised through 2014 before collapsing further in 2015, finally bottoming in late 2015/early 2016 before embarking on the latest run-up.

“Today we are back into balance. China has shut down a lot of inefficient capacity, and I don’t see any reason China would re-enter with a lot of capacity,” said Vergnano. While companies in China are still building some sulphate-based TiO2 plants on a smaller scale in the range of 60,000 tonnes/year versus world-scale chloride-based plants at 100,000-200,000 tonnes/year, the plants that have been shut down are not coming back, he noted.

Chemours itself is debottlenecking its TiO2 plants around the world to add an additional 10% of capacity through 2021 from a year end 2017 base of 1.25m tonnes/year.

“We are doing this across multiple plants. We’re trying to accelerate this but are on track. This is primarily in our big, low-cost facilities in DeLisle (Mississippi, US) and Altamira (Mexico), but also in New Johnsonville (Tennessee, US) and Taiwan,” said Vergnano.

The CEO views Chemours’ TiO2 segment as more than just a commodity business, highlighting the importance of innovation.

“We continually bring out new products such as Ti-Pure One Coat which provides more cover than other products,” said Vergnano. “The #1 advantage for customers and ourselves is to allow their tech people to work on new developments and not to be worried about using less TiO2 or someone else’s. Our resources are geared to new high-end product development.”

On the fluoroproducts side, Chemours plans to shift most production of its Opteon hydrofluoroolefin (HFO) refrigerant to its new plant being built in Corpus Christi, Texas, US.

“We are very close to our current capacity but continue to find opportunities to expand production. But we will shift most of our production to Corpus Christi as soon as possible, as that will be our lowest cost and most efficient plant,” said Vergnano.

The company’s $300m Opteon project in Corpus Christi is on track to be mechanically complete at the end of 2018, with product being shipped to customers at the beginning of 2019, said the CEO. The project will triple current Opteon capacity, which is not being disclosed.

Opteon accounted for 45% of Chemours’ fluorochemicals sales in 2017. Fluorochemicals, along with fluoropolymers, comprise the company’s fluoroproducts segment, which had sales of $2.65bn in 2017.

In the mobile air conditioning market in the US, adoption of HFOs such as Opteon is being driven by CAFE standards as using HFO refrigerants reduces automakers’ CO2 footprint by reducing greenhouse gas emissions. Chemours expects full adoption of low GWP technologies by the US auto market by 2021.

In June 2018, Chemours and Honeywell, both producers of HFOs, announced they were appealing the decision to the US Supreme Court.

“SNAP would accelerate the use of HFOs but it’s really the current CAFE standards driving this now. The US Supreme Court could make a decision by the end of the year but timing is uncertain,” said Vergnano.

And in stationary refrigeration (commercial, chillers) and air conditioning (residential, buildings), the Kigali Amendment to the Montreal Protocol, adopted in October 2016 and ratified by 42 countries, is driving use of HFO refrigerants. This amendment targeting the phase-out of legacy HFCs goes into effect on 1 January 2019.

“The Kigali amendment is good for Chemours and the US and functions as a business trade agreement where US technology and ingenuity will be exported, creating around 150,000 jobs in the US between us (Chemours and Honeywell) and downstream sectors,” said Vergnano.

“It’s good for the environment and business. Europe is leading this, and we think the US will adopt it as well,” he added.

The US has yet to ratify the Kigali Amendment, and there are concerns the Trump administration may choose not to do so.

In April 2018, Chemours acquired ICOR, a US-based distributor of branded ozone-safe refrigerants with annual sales in the double-digit millions.

“This is a channel play for us. Today they sell traditional refrigerants for stationary HVAC systems, but we will bring HFOs to that channel as well,” said Vergnano.

Chemours’ overall M&A strategy will focus on targeted acquisitions, and likely in the fluoroproducts space, including channel plays like ICOR, production assets or geographic expansion. Acquisitions in the TiO2 space are unlikely because of regulatory issues as well as difficulty in integrating other TiO2 assets with Chemours’ unique processes, he said.

On the fluoropolymers front, Chemours sees 10-15% annual growth rates for its differentiated business which comprises melts and elastomers versus GDP growth for its core business which is traditional Teflon PTFE (polytetrafluoroethylene).

“The two big markets are electronics and automation. The Internet of Things (IoT) requires fluoropolymers for speed, temperature resistance and dielectric properties, and is a strong pull for our products,” said Vergnano.

This primarily applies to semiconductors which are not only used in consumer electronics but in many automated systems.

On the US-China trade war, the CEO is not overly concerned on the potential impacts.

For Chemours, the impact of the US-China tariffs is a “wash” as it has the ability to source and sell products worldwide, he noted.

In the second round of US 25% tariffs  on $16bn in Chinese imports, fluoropolymers are included, which could be a benefit for Chemours.

However, the third round of US tariffs on an additional $200bn in Chinese imports that could be implemented in late September includes fluorspar, a key raw material for fluoroproducts. On the flip side,  it also includes TiO2 and pigments based  on TiO2.

On the China side, the second and third rounds of tariffs on US imports do not include TiO2 or fluoroproducts.

For Chemours coverall, whose fast-growing fluoroproducts segment’s sales are nearing those of its Titanium Technologies segment, Vergnano expects to meet or exceed a target of achieving a 15-20% compounded annual growth rate in earnings per share (EPS) from 2018-2020 off a 2017 base of $3.93.

However, investors are clearly sceptical, taking into account a potential major decline in TiO2 profitability by assigning Chemours’ stock price a price-earnings (P/E) multiple of just 7.3x Wall Street consensus 2018 earnings per share of $5.91 and 6.6x estimated 2019 EPS of $6.60.

“We believe Chemours is clearly undervalued, as we plan to grow EPS 15-20% a year over the next three years – we are a high-growth company and it’s a great value story,” said Vergnano.

Chemours is putting its money where  its mouth is, having announced a new $750m stock buyback programme on the  release of its second-quarter earnings on 3 August, as well as a 47% increase in its quarterly dividend.