HOUSTON (ICIS)–Ports and a pipeline company began shutdown procedures on Tuesday in response to Hurricane Florence, which is expected to reach the US Atlantic coastline between Wednesday and Thursday. 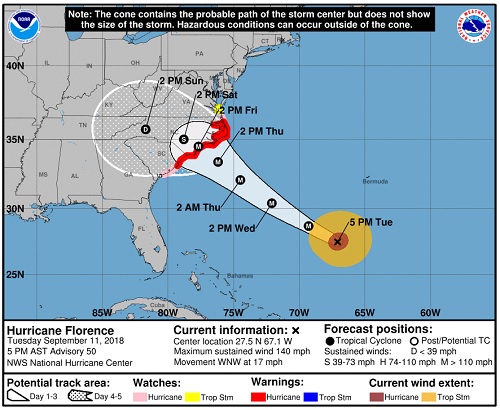 The company said it is moving fuel tanks, pipe and other equipment from floodplain areas, as well as elevating temporary construction bridges and backfilling trenches where pipe has been laid.

“A previous weather system with significant rainfall has already saturated grounds along several portions of the MVP route and precautionary measures have been implemented to address potential issues,” the company said.

Colonial Pipeline, which has a pipeline running between Houston, Texas, and Linden, New Jersey, recently issued a statement repeating information from the American Petroleum Institute (API) on hurricane preparedness. The statement included shutdown and evacuation procedures for refiners and pipeline companies.

The port of Virginia said it will begin shutting down channels and offices on Wednesday.

The North Carolina Ports made a similar announcement. 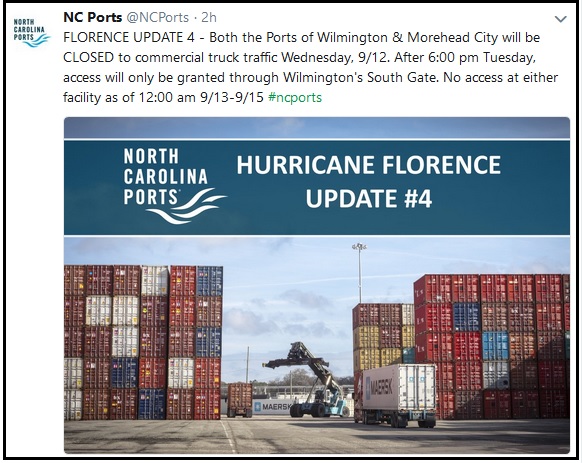 The South Carolina Ports Authority said it was observing normal operations at its ports, but added it was monitoring weather conditions.

The motorist group AAA warned of gasoline prices spiking during the week as a result of drivers stocking up on fuel.

Hurricanes can disrupt the North American petrochemical industry by shutting down production plants and disrupting the operations of customers. Flooding can shut down highways and rail lines, and storms can close ports for days.

North and South Carolina have a number of polyethylene terephthalate (PET) plants.

The Atlantic hurricane season began on 1 June and will end on 30 November.