Home News UK chemicals face up to 6.5% EU tariff under ‘no deal’ Brexit

UK chemicals face up to 6.5% EU tariff under ‘no deal’ Brexit

BARCELONA (ICIS)–UK imports and exports of petrochemicals to the EU27 and most other major trading partner countries will face up to 6.5% World Trade Organisation (WTO) tariffs in the event of a “no deal” Brexit, according to analysis provided by Europe’s trade group Cefic. 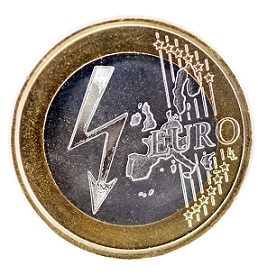 If the country left the EU without any deal in place it would automatically fall back on tariffs agreed under the WTO’s Chemical Tariff Harmonisation Agreement, which has been agreed by most important chemical markets globally, according to Rene van Sloten, Cefic’s executive director for industrial policy.

As well as no longer enjoying tariff-free trade with the EU27, the UK would not benefit from lower or zero tariffs with countries where the EU has negotiated separate bi-partisan free trade deals including Singapore, Canada, Mexico, Korea and, in 2019, Japan.

UK Prime Minister Theresa May faces a battle to get her Brexit deal approved by the country’s parliament over the next few weeks.

If she fails, then one option favoured by some ardent Brexiteers is for the country to leave the EU with no deal in place on 29 March 2019.

If that happens, the UK will be free to negotiate new bilateral or regional free trade agreements but they could take years to negotiate, leaving the UK relying on WTO tariffs.

Under the ‘Most Favoured Nation‘ principle applied to all WTO members, countries must apply the same tariff to all trading partners.

They are still free to negotiate separate bilateral free trade deals, however.

“The bottom line message is that with key trading partners such as US, Canada, Mexico, Japan, Saudi Arabia, Russia, Korea and EU27 the maximum rate would generally become 6.5% in case of a no deal Brexit,” said Van Sloten.

“With the US, that tariff would be the same as for the EU27, but for Canada, Mexico, Korea and soon with Japan the EU27 has zero duties, while the UK would face higher Most Favoured Nation duties.”

Not all countries follow the Chemical Tariff Harmonisation Agreement. For example, the applied tariffs of countries such as Brazil or India are much higher for many petrochemicals.

The WTO’s Chemical Tariff Harmonisation Agreement was signed during the 1986-94 Uruguay Round which negotiated the General Agreement on Tariffs and Trade (GATT).

Before it was implemented, tariffs on polymers often reached 16-17%, for example.

During the current US-China trade war the US is claiming exceptions to the WTO rules based on “national security” concerns.

The UK would no longer benefit from these EU free trade deals in the event of a “no deal” Brexit. Click on the map to enlarge. 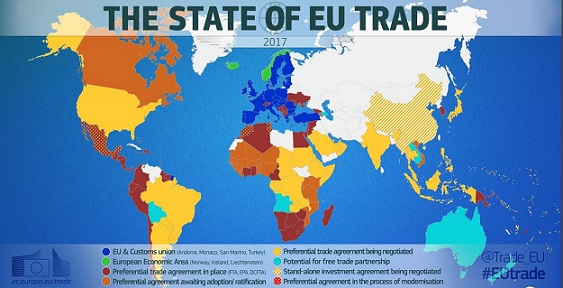 Follow this link to discover the tariffs applied to EU exports. http://madb.europa.eu/madb/indexPubli.htm

Follow this link to discover tariffs applied by all WTO members globally https://www.wto.org/english/tratop_e/schedules_e/goods_schedules_table_e.htm

Focus article by Will Beacham