HOUSTON (ICIS)–The US polyethylene (PE) industry is set to bring on several new plants in 2019 even as trade tensions with China create questions regarding the feasibility of new US export-driven PE plants.

Abundant availability of ethane gas derived from shale oil drilling has spurred a wave of new crackers and ethylene derivative plants in the US as US-based ethane crackers enjoy a considerable cash cost advantage in the production of PE and other ethylene derivatives relative to Asian and European producers.

Sasol has recently achieved mechanical completion at its new 470,000 tonne/year linear low density polyethylene (LLDPE) plant in Lake Charles, Louisiana, and is expected to begin operations at the plant before the end of December.

Sasol’s complex also holds a 420,000 tonne/year low density polyethylene (LDPE) plant, which is expected to come on line in 2019.

Formosa is also expected to start up an LDPE plant along with a high density polyethylene (HDPE) plant in Point Comfort, Texas, in the first half of 2019. Each plant will have a capacity of 400,000 tonnes/year.

PE demand in North America is considered mature and is not expected to grow much beyond GDP growth. New capacity builds are therefore being targeted primarily at export markets, with China being the primary target market given the country’s large market and its significant PE deficit.

Trade tensions with China, which would see US HDPE and LLDPE subjected to additional tariffs of 25%, have thus caused some concern in the industry.

While most industry executives say that global trade flows will rebalance and that they will be able to place all the material that would otherwise have gone to China, no other import market can match the sales volumes achievable in China. US exporters run the risk of provoking antidumping investigations in other target countries if they are too aggressive in placing volumes. There is also concern that the large new capacity additions could trigger global price wars, as sellers will come under pressure to give discounts to place volumes.

An increasing export focus among US producers has already been in evidence in 2018 and is expected to continue into 2019. According to data from the American Chemistry Council (ACC), through the first 10 months of the year, exports were up by 96% for LLDPE, 42% for HDPE and 19% for LDPE relative to 2017. 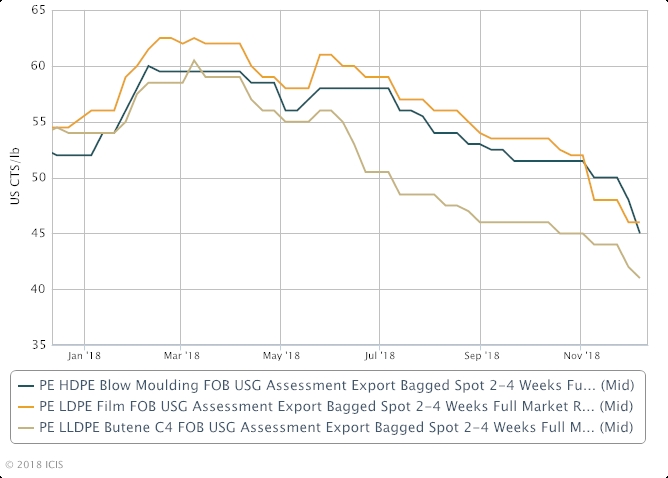 Register for your complimentary place at the ICIS Outlook Seminar on 30 January in Houston, Texas. Join our market experts as they cover the key developments, potential growth opportunities and future trends in the petrochemicals and polymer markets. Secure your place now.