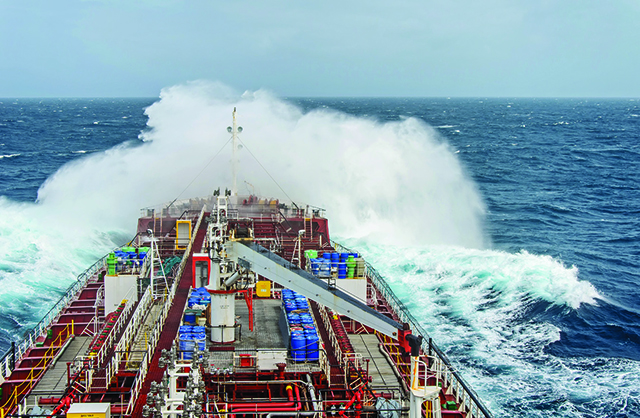 Four serious challenges are on the horizon for the global petrochemical industry as it meets again in San Antonio.

The first is the growing risk of recession, with key markets such as autos, electronics and housing all showing signs of major weakness. Central banks are already talking up the potential for further stimulus, less than a year after they had tried to claim victory for their post-Crisis policies.

Second is oil market volatility, where prices raced up in the first half of last year, only to then collapse from $85/bbl to $50/bbl by Christmas, before rallying again this year. The issue is that major structural change is now underway, with US and Russian production increasing at Saudi Arabia’s expense.

Third, there is the unsettling impact of geo-politics and trade wars. The US-China trade war has set alarm bells ringing around the world, whilst the Brexit arguments between the UK and European Union are another sign that the age of globalisation is behind us, with potentially major implications for today’s supply chains.

And then there is the industry’s own, very specific challenge, shown in the first chart. Based on innovative trade data analysis by Trade Data Monitor, it highlights the dramatic impact of the new US shale gas-based cracker investments on global trade in petrochemicals. The idea is to capture the full effect of the new ethylene production across the key derivatives – polyethylene, PVC, styrene, EDC, vinyl acetate, ethyl benzene, ethylene glycol – based on their ethylene content. Even with next year’s planned new US ethylene terminal, the derivatives will still be the cheapest and easiest way to export the new ethylene molecules.

The cracker start-ups were inevitably delayed by the hurricanes in 2017. But if one compares 2018 with 2016 (to avoid the distortions these caused), there was still a net increase of 1.7 million tonnes in US ethylene-equivalent trade flows. This was more than 40% of the total production increase over the period, as reported by the American Chemistry Council. And 2019 will see further major increases in volume with 4.25 million tonnes of new ethylene capacity due to start-up, alongside full-year output from last year’s start-ups. 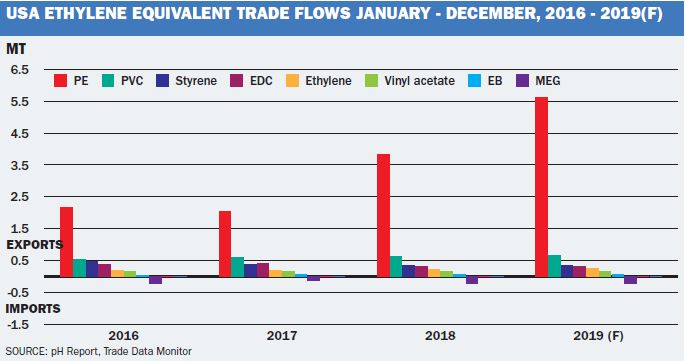 The problem is two-fold. As discussed here in 2014 (ICB, US boom is a dangerous game, 24-30 March), it was never likely that central bank stimulus policies could actually return demand growth to the levels seen in the Boomer-led SuperCycle from 1983-2000:

“Shale gas thus provides a high-profile example of how today’s unprecedented demographic changes are creating major changes in business models. Low-cost supply is no longer a guarantee of future profitability.”

This was not a popular message at the time, when oil was still riding high at over $100/bbl and the economic impact of globally ageing populations and collapsing fertility rates were still not widely understood. But it has borne the test of time, and sums up the challenge now facing the industry.

Since then, of course, US shale developments have gone from strength to strength. And the recent news of major new investments being planned by ExxonMobil and Chevron Phillips highlights the likely long-term impact. The key factor from a petrochemical viewpoint, of course, is that the ethane produced from any “wet gas” discoveries can often effectively become a distressed product. It forms an explosive mixture when mixed with air at 3%-12.5% by volume, and so has to be extracted before the natural gas can be sold.

The second chart shows the impact of this new ethylene production on global markets. Originally, most of the new production was expected to go to China, where it was assumed that demand would always be expanding ahead of domestic supply and so would require major US imports. That hope, unfortunately, proved over-optimistic given China’s growing focus on self-sufficiency and its policy of preferentially developing trade with Belt & Road Initiative countries in the Middle East. 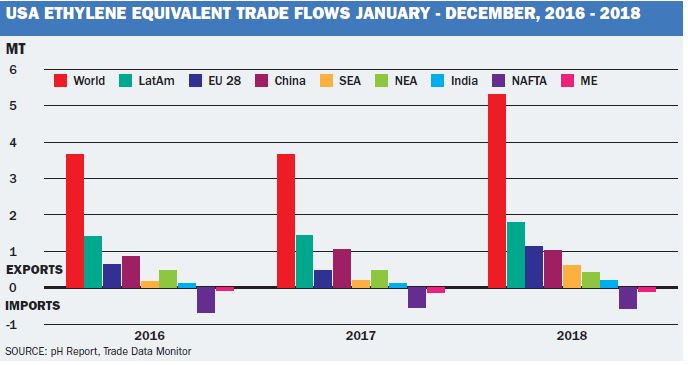 President Trump’s decision to launch his trade war last year therefore couldn’t have been worse timed. But even if the tariffs are withdrawn, it seems likely that Middle Eastern suppliers will continue to dominate China’s import market. The opportunities in Latin America are also limited by the overall size of the market. Thus, it is no real surprise that Europe has become the target for the largest volume increase, with nearly half a million tonnes of additional ethylene equivalent product arriving in 2018.

If this flow continues to expand in 2019, as seems likely, it will have a number of critical impacts on the local market:

■ It is already reducing European output of co-products, as Europe is a naphtha-based economy. Q3’s propylene production was the lowest since 2001 according to APPE data, as ethylene equivalent imports replaced the need for domestic ethylene output

■ There is therefore a clear risk that further imports will impact other value chains beyond simply ethylene, as well as disrupting existing infrastructure. Any enforced cracker closure would inevitably impact co-product output and pipeline operations

■ A related issue is that no new cracker has been built in Europe for over 20 years, and therefore those regarded locally as a first quartile operation may well be seen by non-European companies as second or perhaps even third quartile within their portfolio

And, of course, we cannot ignore the separate impact of the sustainability debate and the threat it poses to single-use plastics. Over half of polyethylene is used in this application, and Europe is clearly in the eye of the storm in terms of its potential replacement by either recycled polyethylene or other materials.

As with the previous debate over CFCs and the ozone layer, the underlying issue is focused on the industry’s licence to operate. And as we know from past experience, change can often come much faster than initially expected.

The conclusion is therefore fairly clear, namely that time has run out for the idea that the industry can hope for an eventual return to steady growth and ‘business as usual’. Instead we have to deal with a world of increased volatility and uncertainty, combined with increased complexity and ambiguity. Or as the US military would describe it, a VUCA world. The result will likely be to create winners and losers in the industry on a scale that we haven’t seen for decades.

The key issue is that the industry has to embark on a paradigm shift and become demand-led again. This means reversing the switch to become supply-driven that took place during the SuperCycle, when demand was always growing. Then, over a relatively short space of time, companies stopped sanctioning projects on the basis of signed customer contracts, and instead began to forecast future growth as simply a multiple of expected GDP growth.

Now, they will have to go back to the earlier way of working, and refocus on anticipating and meeting future market needs. This will likely involve the development of a more service-led approach, based on re-discovering the importance of experienced techno-commercial people working with customers on the ground. And they will need support from capable R&D teams who can translate the needs they uncover into new products and services

These changes will not be easy to deliver, given the scale of the external challenges created by the recession risk, volatile oil markets, trade wars and the rise of the sustainability agenda. But the major increase in US ethylene equivalent exports now underway means that, unfortunately, there appear to be few hiding places available as the combination of these challenges will inevitably change the nature of industry competition.

Helpfully, however, we can see that key customer industries are already going through the same transition, and so can provide examples of what we need to do. In the auto industry, for example, the rise of electric vehicles means that lifetime cost rather than initial price is becoming the key metric for buyers, with range becoming the new horsepower, connectivity replacing cylinder count, and sustainability becoming the new status symbol. The winning chemical industry companies of the future will likely therefore be those who recognise that revenue and profit growth will be generated not from the value of the product itself, but from the value provided by the product.