LONDON (ICIS)–The addition of new sulphuric acid capacity in China has become a talking point for the global market of late, with one trader describing potential new export players’ intentions as “the million-dollar question”. 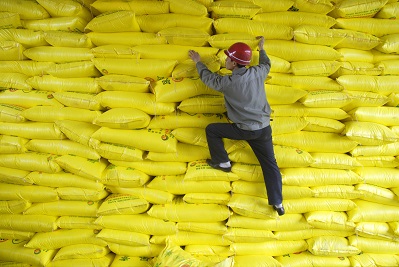 Information passed to ICIS indicates a raft of capacity expansion planned for this year, and out to 2022.

If domestic Chinese acid demand picks up as plants are upgraded or bought online, it might absorb the new capacity. But if downstream pull remains as weak as it appears to be presently, the impetus to export may instead prove attractive.

In central China, meanwhile, one copper and one zinc producer are adding a combined 1.3m tonnes of acid capacity, while a sulphur-burning acid manufacturer plans to expand its capacity by 360,000 tonnes.

In the northeast and northwest, copper smelters are adding 400,000 and 700,000 tonnes of acid capacity, respectively; while in southwest China, a zinc producer has planned a 380,000 tonne expansion to its sulphuric acid capacity.

In all, the document indicates in the region of 10.56m tonnes/year of additional sulphuric acid capacity will come online in China before 2022.

This is, however, counterbalanced by some 1.48m tonnes of sulphuric acid capacity which will leave the market in 2019-2020, as producers exit the trade.

On paper, the additional sulphuric acid capacity has the potential to adjust Asia’s supply/demand balance – but the reality, according to traders and established Chinese producers, is that only a limited number of these prospective exporters will actually be capable of selling internationally – and some may not be so inclined.

Each smelting unit will also consume a greater or lesser degree of acid, depending on the grade of copper or zinc, for example, being produced – adding further uncertainty to the potential volume of acid available to export.

“A lot of smaller players don’t have the capacity to export,” one Asia-based trader says. “They don’t have the facilities. The ‘winners’ will have tanks, or even tankers, which will help traders sell their acid.

“There’s a lot of companies producing or expanding [acid capacity], but we’re only talking to maybe four or five which have an actual chance.”

An established large-volume Chinese acid producer, meanwhile, says that without tank space at Chinese ports, company-owned berths, or pipeline infrastructure in place, these potential exporters have a long way to go before they have the capability to sell abroad.

A second international trader agreed with the sentiment, adding: “Which producers will be able to export is the million-dollar question.”

Arguably towards the head of the pack is a subsidiary of state-owned metals major Chinalco – Southeast Copper Co – which is believed to be planning to start sulphuric acid exports from its complex in Fujian province; possibly as soon as late April.

There is talk that a single acid cargo of an unspecified volume is being prepared for export, and traders are waiting to see if the producer’s efforts are a success.

Fujian province is said to be well-supplied for acid, which is believed to have led Chinalco to consider exporting some of Ningde’s estimated 1.2m tonnes/year acid capacity, or to sell acid into neighbouring provinces.

None of the above has been confirmed by Chinalco.

Selling domestically presents its own logistical challenges, owing to the toxic and dangerous nature of sulphuric acid.

Generally, the Chinese domestic acid market is lacklustre of late, owing to an ongoing lack of demand from downstream acid-consuming industries. 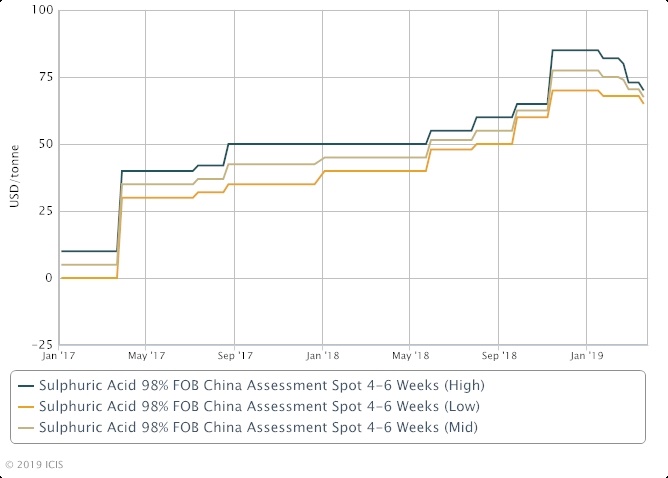 Spot export prices have been on a slow downtrend as a result – although imminent maintenance outages at established producers Jinchuan Group, Tongling, and Two Lions may yet support offers.

Jinchuan Group was heard preparing for a 45-day outage, to start on or around 28 March, while Tongling’s maintenance is expected to take one month. This is unconfirmed.

Two Lions, meanwhile, has revealed plans for a maintenance turnaround in July and August, for a period of around 30-45 days.