HELSINKI (ICIS)–The linear economic model that has dominated industry and petrochemicals production up to this point is no longer viable, with an inevitable shift to a circular economy likely to drive a transformation in the chemicals industry, the European Commission’s director general for the environment said on Thursday. 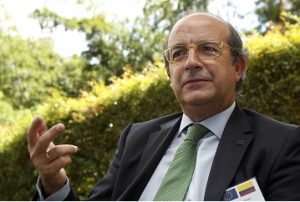 The move towards a closed loop of production and recycling, driven by political and consumer pressure, is likely to reinvent the chemicals sector, and is the only way for businesses to survive, according to EU environmental director general Daniel Calleja.

“The present linear model is no longer viable, we cannot consume resources for an unlimited period when resources are finite,” he said, speaking on the sidelines of the Helsinki Chemicals Forum.

“Most companies… have realised they will be able to survive only if they introduce sustainability in business models,” he added.

In the past, the petrochemicals sector and European policymakers have sometimes been at loggerheads over policies such as the transition to green energy, with managers citing the impact on competitiveness at a time when European players are struggling to compete with lower-cost rivals.

The public and private sectors have been moving far more in lockstep over the transition to a circular economy, and this is due to pressure from end market companies responding to consumer demands, and the economic opportunity the shift offers the industry, Calleja added.

“The thing that has changed very significantly in the sense that environment is no longer an extra cost,” he said. “Sustainability can be a source of competitiveness.”

Petrochemicals producers have already started to work more closely with waste collection and recycling players to work on better systems harmonisation along the supply chain, and the barriers between the different industries may become more porous over time, according to Calleja.

“Could the chemicals sector be the recycling industry of the future? We see that as an opportunity,” he said earlier in the day, addressing industry and government figures in a keynote presentation at the forum.

Companies such as Austria’s Borealis have already started to buy up plastic recycling firms in Europe, while others are purchasing or producing syngas from waste plastic to use as a cracker feedstock. Most of these projects are at the pilot phase at present, but the industry’s commitment is genuine, Calleja said.

While the push towards renewables and cleantech a decade ago led to the coining of the phrase “greenwash” to describe highly-publicised but negligible or ineffective commitments towards green energy, the legislative targets the Commission has planned will force companies toward circularity, he added.

Current EU targets included 65% of municipal waste being recycled and no more than 10% going to landfill by 2030, restrictions on single-use plastics, and a 25% recycled material target for plastic bottles by 2025. All plastic packaging in the market will need to be reusable or recyclable by 2030.

“We will not accept greenwashing as a way out of the circular economy,” he said.

“You cannot prejudge now what will be the composition of the new commission, but all the political parties have put environmental issues and sustainability as one of their top priorities, and it is one of the top priorities for European citizens,” he said. “We have demonstrations in the streets saying ‘you have to act.’”

The west is currently grappling with the closure of China, for so long a sponge for its waste plastics, as a market. Calleja said that Europe “needs to get its act together” on the issue, but that the loss of the ability to ship the material elsewhere in such large volumes should increase the pool of viable plastic waste domestically.

“If we treat them, handle them properly, this is the basis for new economic activities,” he said.

Europe’s push on circularity, which follows its aggressive push on emissions reduction as part of the Paris Agreement of 2015, comes at a time of when some analysts have noted a global retrenchment away from globalisation towards regionalism.

The US’ decision to walk away from the Paris Agreement was a substantial setback for the emissions-reduction targets of the accord, while its trade war with China and threats of punitive measures against the EU and Japanese automotive sectors has dampened global trade.

The results of the Australian general elections last week was also seen in part as a repudiation of climate change policy, with incumbent Scott Morrison retaining his seat despite his ambivalence to emissions-abatement measures and the fact that his rival was running on a green platform.

Despite the increasing atomisation of the global order, the EU intends to push ahead with its push on decarbonising its economy.

“I think Europe needs to continue defending its values and continue defending multilateralism and a rules-based order. It’s not just trade and the environment, sustainability, circular economy strategy are very important,” he said.

“Europe has to assume some leadership there as we are doing, because we need to develop globally in the right direction. We will not guarantee our survival on the planet if we go in a different way,” he added, pointing to bilateral agreements the EU is pursuing with third countries such as China on the circular economy and marine litter.

While the US has stepped away from making specific commitments to limit the increase in global temperature levels to 1.5-2 degrees  centigrade, the country is still

“In the latest discussions we had in the G7 and the G20, the US is saying that they are not part of the Paris Agreement, but that they are reducing their emissions, but not within the Paris framework,” he said.

“Even with this, which was bad news – and I believe there is overall the need to have global resolution when we are dealing with these issues – the figures that the US provided in the last meeting showed they were also making progress in reducing their emissions,” he added.