Chemical markets are suffering in Asia as the US-China trade war and general economic malaise impact demand from downstream industries and their customers.

Prices are falling across multiple value chains with some collapsing to lows not seen for a decade, despite steady or firming feedstock values. 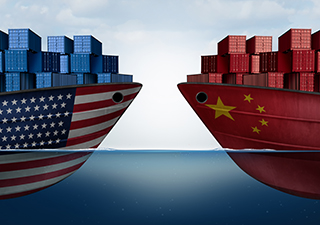 China polymer markets are in a particularly fragile state as 25% US tariffs on many finished articles containing plastics have unnerved export-oriented convertors and their customers. The slowing Chinese economy is also hitting demand growth for plastic products domestically, as well as packaging, a major use of polyethylene (PE).

As hopes for a truce between China and the US fade, markets are now planning for these elevated tariffs to persist. Without a resolution to the dispute, the US plans to hit a further $300bn of Chinese goods with 25% tariffs in June, meaning that almost all of the country’s exports to the US will be targeted.

ICIS reports this week that Asia polycarbonate markets have slumped to their lowest in nearly a decade, pummelled by a plentiful supply situation that could persist amid the ongoing US-China trade war. Spot polycarbonate (PC) prices extended their downward trend due to the supply overhang, while demand was dwindling, particularly for imports in the key China market.

There were reports of warehouses in China being full of PC inventories, with the trade war hitting customer sentiment. The downward spiral in PC prices comes alongside weakening polymethyl methacrylate prices (PMMA) in China, amid lacklustre demand. Chinese domestic PC supply is due to increase as local projects start up this year.

Asia’s methyl methacrylate (MMA) spot prices have slumped to their lowest levels in 28 months, and the market is likely to stay stifled amid weak Chinese values and the impact of the trade war. This marks the ninth straight month that declines have taken place.

Acrylonitrile-butadiene-styrene (ABS) markets in Asia have also fallen heavily this month. It is particularly sensitive to the trade war because key end uses are in important export markets such as electronics and recreational products. Another major use is in the automotive sector which has suffered double-digit declines in China this year.

The automotive sector is weak globally, and especially in Asia with India as well as China suffering double-digit declines in production in April, and this is expected to persist in May and June. China’s tyre exports to the US have shrunk in the first four months of 2019, and may continue to fall.

This has a direct impact on styrene butadiene rubber (SBR) which is used for tyre production.

Beleaguered SBR manufacturers in Asia this week hiked their prices in the face of a 14% increase in feedstock butadiene (BD). “But there are no enquiries and no buying interest,” according to a Chinese rubber distributor.

In Asia’s ethyl acetate (etac) markets, producers are trying to hike prices in the face of weak demand. Plants in China are operating at reduced rates to stem losses amid soft market conditions. “Prices can be supported from a cost perspective but if demand cannot support, prices may drop back,” said an import distributor in northeast Asia.

The start-up of new US PE capacities is also unsettling Asia’s PE sector as the new production, especially competitively priced LLDPE, seeks new markets. China PE prices are falling and this is putting downward pressure on the rest of Asia.

The titanium dioxide (Ti02) market is also suffering, with prices in Asia expected to remain weighed down by the trade war and consumer sentiment. China’s first quarter imports and exports of Ti02 have slumped compared to the same time last year.