INSIGHT: Drop in petchems margins in the first half illustrates wider malaise

LONDON (ICIS)–The second quarter ended with variable margins for the major petrochemicals and plastics largely down sharply in the year to date.

Feedstock costs were lower in the first six months, year on year, but companies were clearly not able to ride the storm of the US-China trade war and weaker prospects for the global economy.

The European chemicals bellwether BASF issued late on Monday a profit warning that dragged most chemicals stocks in the region sharply down on Tuesday.

Supply has lengthened but demand growth has stalled – or been disrupted. It has not been easy to hold on to price or push through increases as liquids-based feedstock costs have moved.

The ICIS Petrochemical Index (IPEX), an index based on a basket of prices from the top 12 petrochemicals and plastics, was down in June with the year-on-year fall at 18%.

The northeast Asia IPEX for June was down 21% compared with the same month last year.

The global IPEX was down 15% year on year in the second quarter.

Prices globally have responded to the fluctuation this year in the price of crude oil but have been under pressure following a difficult final two months to 2018.

Demand for many petrochemicals and plastics has come under pressure as end-use markets as diverse as automobiles and textiles have felt the pinch.

PROFIT WARNING QUARTER
Analysts at Baader Bank had already suggested that the second quarter of this year could be the “profit warning quarter”.

That assertion is based on feedback from conversations with more than 30 private and listed chemicals companies, as well as chemical performance indicators.

Momentum has been lost, and growth for the second half looks as though it could be lower.

Order book visibility is worsening as customers are ordering more hand to mouth.

Other points in the bank’s analysis are persistent weak automotive, industrial and protective coatings and consumer chemicals; good contraction driven by infrastructure projects, but a bottoming out electronics sector and improving aerospace and wind power.

Pricing power has been lower sequentially for commodity and intermediates producers. And it has fallen for more specialty products, particularly those linked to the ailing automotive industry.

Baader Bank also pointed to the fact that the US chemicals trade group the American Chemistry Council’s Chemical Activity Barometer (CAB) was only flat in June, while Germany’s Ifo business climate index was down.

Chlorine production in Europe and the US was also down.

ICIS data show how margins for petrochemical and plastics producers were under pressure in the first half.

Integrated polyethylene (PE) margins in northeast Asia – based on naphtha cracking – were down as much as 50% for higher grades like high density polyethylene (HDPE) in the first half year on year, and 27% down in the US (based on ethane cracking).

HDPE margins in Europe were up slightly over the same period.

Looking at polymers widely used in industry, northeast Asia acrylonitrile  butadiene styrene (ABS) margins were 51% lower in the first half but up 8% in the US and relatively flat in northwest Europe. 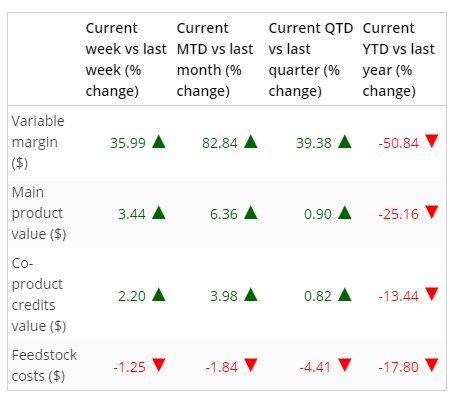 Polypropylene (PP) margins based on liquefied petroleum gas (LPG) as cracker feed were down 14% in North America, and down 21% in northeast Asia based on naphtha as cracker feedstock.

In northwest Europe PP margins were up 3%.