Dow plans to cut capital expenditures by $500m, to $2.0bn in 2019 to respond quickly to a more challenging macroeconomic outlook, its CEO said on Thursday.

“This is not the time to invest in a major greenfield project,” said Jim Fitterling, CEO of Dow, on the company’s Q2 earnings conference call.

As part of the capital cuts, Dow is postponing the advancement of a feasibility study for a new worldscale siloxanes plant, and postponing its planned 450,000 tonne/year polyethylene (PE) expansion in Western Europe which had been expected to start up in the first half of 2022.

However, it will move forward with incremental expansions in silicones, ethylene oxide (EO) derivatives, as well as a planned 600,000 tonne/year solution PE project on the US Gulf Coast slated to start up in the second half of 2022, Fitterling said.

The lack of visibility in a challenging macro environment is prompting Dow to put the brakes on spending.

“The macro environment is cautious, largely driven by geopolitical volatility and prolonged trade negotiations… The net result is a continuation of a short-term buying pattern and decreased visibility along value chains,” said Fitterling.

“Bottom line, we still see the global economy expanding, but the pace of growth slower, particularly in Europe and in China. The US remains fairly robust in consumer non-durable sectors. However, spending on big ticket items like home builds, autos, durable goods and consumer electronics remains tepid globally,” he added. 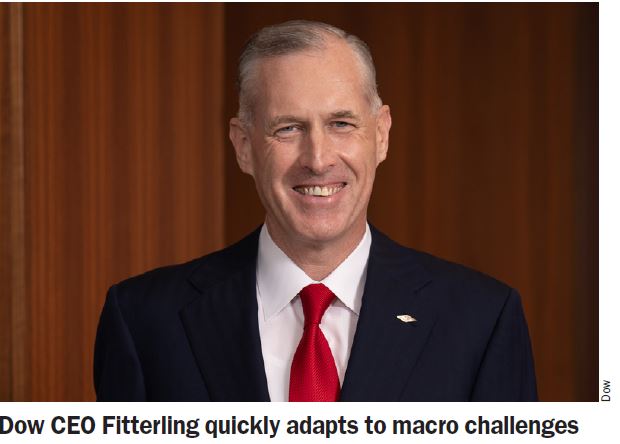 Dow’s revised capex budget of $2bn for 2019 is well below its original target of holding capex at or less than depreciation and amortisation (D&A) with a near-term target of around $2.8bn or less annually for at least the next three years, as it indicated on its pre-spin investor roadshow in March 2019.

Dow will continue to keep capex tight until it gets better visibility that the industrial economy is picking up.

“I’m going to keep it tight until I get better visibility on the market. I think we need to get a trade deal… to get some confidence back in this market, at least on the industrial side,” said Fitterling.

“The consumer is strong but on this industrial side… those are high content uses for our materials… When we see some pick up there, then we’ll take a look at whether it’s the right time to move back in,” he added.

Consumer strength was evident in Dow’s Packaging & Specialty Plastics (P&SP) segment in the second quarter, where volumes for packaging rose 3%, driven by double-digit gains in Asia as well as an increase in Europe, Middle East and Africa (EMEA). However, overall the P&SP segment saw sales decline 15% year on year to $5.2bn and operating profits fall 17% to $768m.

On an operating earnings before interest, tax, depreciation and amortisation (EBITDA) basis, results were down 10% to $1.14bn. However, the EBITDA margin improved to 21.9% versus 20.7% in the year ago period on lower cost feedstocks.

Demand growth in packaging and contributions from growth projects were more than offset by PE margin compression.

Going forward, Dow expects a flat PE market when it comes to pricing.

“Our view on PE prices is that they were flat in July and I expect they’ll continue to move sideways here into the third quarter,” said Fitterling.

“Our view is that we’ve kind of been in a plateau here of about 87-88% operating rates in PE globally, and I think we’re going to continue to see that extend out for the next couple of years,” he added.

Projections of plummeting operating rates “are a little bit tough to understand” given the industry’s penchant for project delays, said the CEO.

“We had double-digit growth in China – both in PE and downstream silicones, so the market demand growth is there,” said Fitterling.

An economic recession doesn’t appear to be on the horizon as consumer spending on non-durables is healthy he noted.